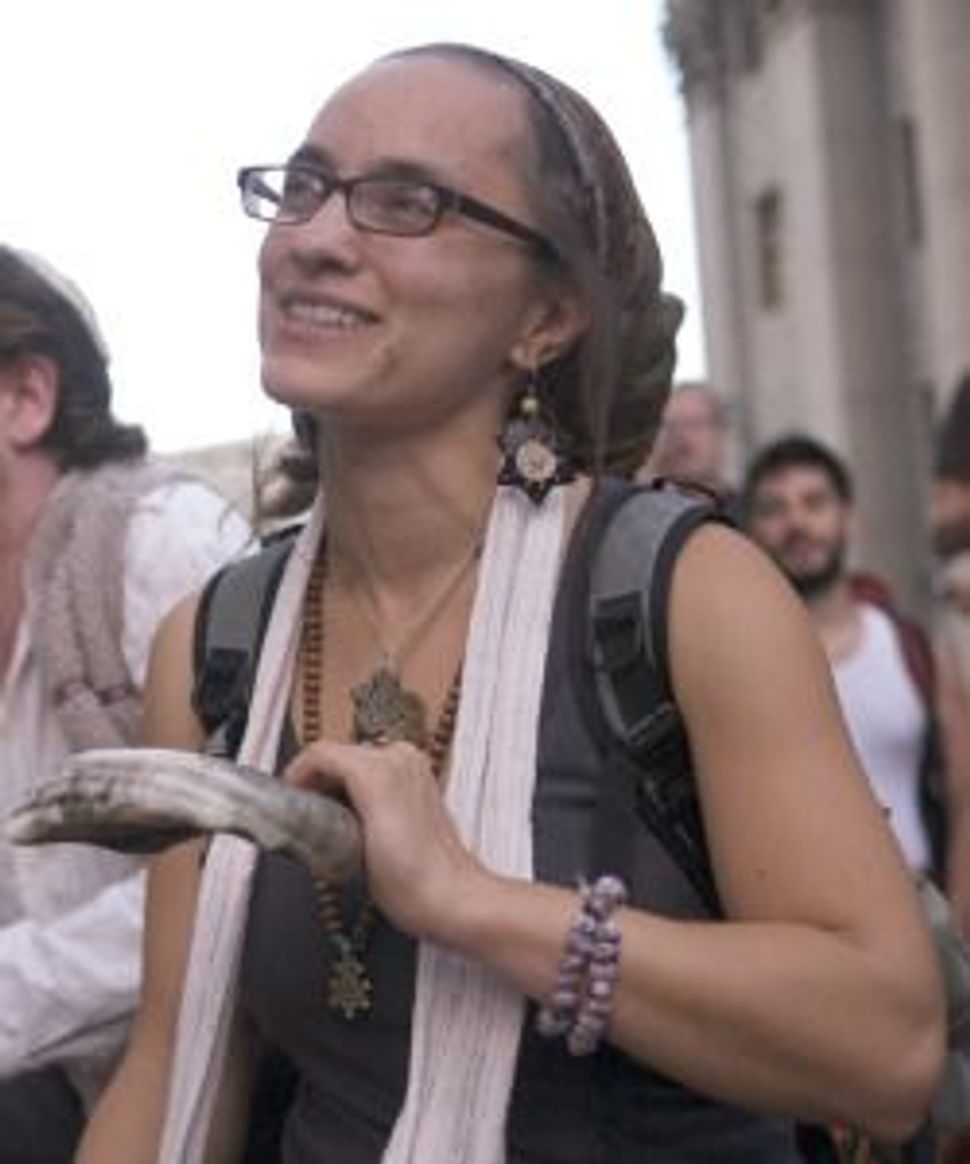 Jeanette Friedman looked over the crowd of hundreds of Occupy Wall Street supporters in Zuccotti Park on the evening of Sept. 16, and all she could do was gush about her son.

“I can’t believe how many people are here,” she shouted to her boy, Dan Sieradski, who was helping to lead a Rosh Hashanah service the night before the one-year anniversary of the movement’s birth. Once derided as a quixotic endeavor, Occupy is now credited by many with helping to reinvent social justice activism in America for the 21st century.

Sieradski said it was “fortuitous” that the first anniversary would fall on the first day of Rosh Hashanah. In fact, the Occupy Faith contingent of OWS worked with the main planners of the Sept. 17 actions, which was to include civil disobedience in the financial district, to allot time for the New Year’s service the night before, so that it would not overlap with any other protests or actions.

“The organizers understand how important this, that this a holiday that deserves respect,” said Tammy Shapiro, an OWS organizer.

For the social justice-minded Jews of OWS, the opportunity to mark the beginning of year 5773 on the Jewish calendar and Year Two of the movement was perfect.

“In Shemot Rabbah we learn if all the troubles were placed on one side and poverty on the other, poverty would outweigh them all,” Sieradski told the assembled crowd. “Exodus Rabbah says there is nothing more grievous than poverty.”

Pointing to the Jewish teaching that saving one life is equal to “saving a world,” Sieradski went on: “That makes 46.2 million worlds to save in the U.S. alone.”

He jumped to labor rights by saying, “The Talmud says whoever withholds an employee’s wages, it’s as though they took that person’s life from them. And yet, we import cheap labor, export jobs overseas to sweatshops, resist minimum wage laws and attack workers’ collective bargaining rights.”

Sieradski spoke about how the injustices of our financial system aren’t necesarily carried out by “outright thieves,” quoting Rabbi Moshe Chaim Luzzatto and invoking firms like Goldman Sachs and the now-defunct Bear Stearns. He said that many people “get a taste of stealing when they permit themselves to make an unfair profit at the expense of another.”

He added, “Will their sins be overlooked for their sizable contributions to charity? No, says the Rambam. A mitzvah that is done by committing a sin is not a mitzvah.”

The intersection of faith and opposition to corporate excess has been vital to the OWS movement. Episcopal Bishop George Packard was arrested with other OWS activists in December for trespassing onto property owned by Trinity Church. In battling the charges, he along with Catholic priest and peace activist Daniel Berrigan and author Chris Hedges questioned the church’s prioritizing its investment in Manhattan real estate over Jesus Christ’s teachings humility and commitment to the poor.

Likewise, the Jews involved in the OWS movement have been quick to point to passages and teachings that align closer to those of labor than of the bankers many of whom, as some have pointed out, are themselves Jewish.

“We know what to do, since the time of Isaiah. What needs to happen is justice,” said Aaron Katz, who came to the Zuccotti Park service. “I think anything that strives for justice, anything to improve the human condition is inherently spiritual, because man is a spiritual being.”

Looking 10 days forward, Katz spoke about a passage Jews read during Yom Kippur, the Day of Atonement, at the point of the fast when the pain of the hunger is at its height. “God doesn’t want your fast, God wants justice,” he said. “What really matters is to clothe the poor and the homeless and to support the orphan and the widow.”

OWS, which has its fair share of left-wing socialists and radicals, could easily be classified as atheistic or at the very least humanistic and secular. But organizers saw that Jews and non-Jews in OWS were eager to take part in the Rosh Hashanah convergence. There were only a few brief disruptions from a handful anti-religious activists during the service, including a lone activist who shows up to OWS events preaching the virtues of the Chinese Communist Party.

“By no means do I think faith is not respected,” Shapiro said of OWS in general. “There’s been so much support.”

While many OWS protesters had anticipated confrontations with the police on the anniversary of OWS there were no legal snags in pulling off the Rosh Hashanah service. During the service, Rakia Chandler reminded the crowd that all people are created in God’s divine image.

She added to that remark, sparking chuckles: “Even the police.”