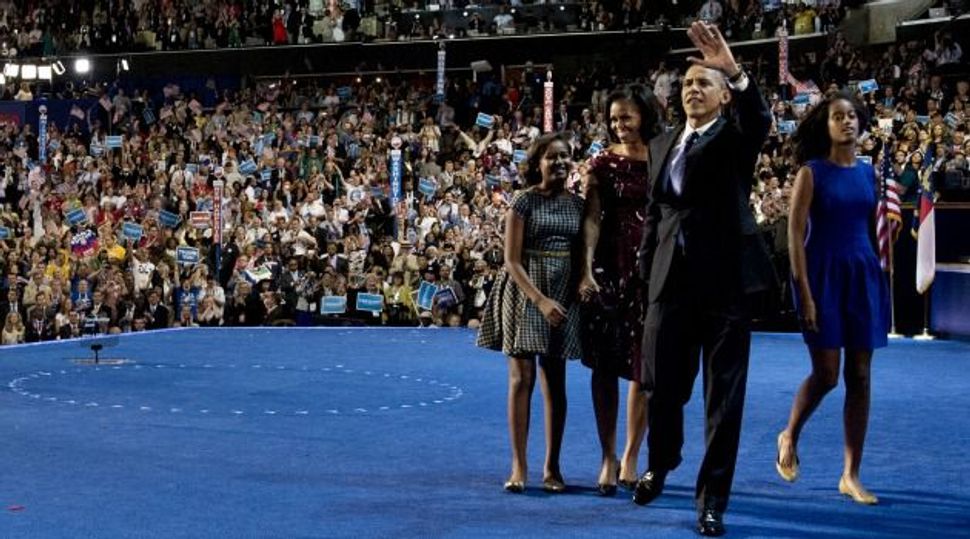 The messy alteration of the party platform at the recent Democratic National Convention was a political embarrassment for Democrats and a rhetorical gift to Republicans. But did it mean anything? At a time when presidential candidates so powerfully shape their party’s personality, do these platforms even matter anymore?

In the short term, the answer is no. The platform is generally written by the people who care most about the finer points of party ideology but who are rarely able to exert leverage on the top of the ticket. The dispute about the Democratic plank on Israel is a case in point. Though the party leadership pushed through language declaring that Jerusalem is the undivided capital of Israel, there is virtually no chance that recognition of such will become American policy.

Both Democratic and Republican candidates have pledged to move the U.S. embassy from Tel Aviv to Jerusalem, but once in office, they don’t change the U.S. ambassador’s address. They can’t — not until final-status negotiations with the Palestinians define Jerusalem’s boundaries and sovereignty. This plank, like so many others, is an expression of sentiment, perhaps an aspiration, but nothing more.

As if to emphasize the point, Republican presidential nominee Bob Dole said in 1996 that he hadn’t even read his party’s platform, after its writers rejected his more tolerant position on abortion. Today you hear echoes of that same spin from Mitt Romney’s supporters, in seeking to explain their candidate’s differences with the 2012 GOP platform on abortion and other issues.

But widen the lens historically to compare platforms over time, and the development of each party’s ideology snaps into focus. By tracing the evolution of the major party platforms over the past three decades, it becomes clear that while both parties have shifted rightward on many domestic issues, the Republicans have taken a much sharper turn.

This could explain the stubborn resilience of Milton Himmelfarb’s famous observation that American Jews earn like Episcopalians and vote like Puerto Ricans — in other words, why, after achieving prosperity and power, Jews still tend to vote like the struggling outsiders they once were. It may be that Jews stick with the Democratic Party because the party has moved more to the center with them, in contrast to the lurch further afield made by the Republicans.

To illustrate this point, the Forward compared the two party platforms from 1980 and 2012. Why 1980? That was the presidential election that Republicans most wish to emulate this year, featuring a Democratic incumbent beset by economic challenges at home and an unruly global landscape, especially in the Middle East. It was the year that the president, Jimmy Carter, won a smaller percentage of Jewish votes than any Democrat had in 60 years.

A stroll through that party’s platform reminds you that the liberalism of 30 years ago barely resembles the tempered way the L-word is used today. In 1980, Democrats strongly supported comprehensive, federally funded child care, and insisted on maintaining the federal government’s primary role in sending out welfare checks, rejecting the idea of directing those funds in block grants to the states. On health care, they favored universal health insurance and believed that care should be redistributed to underserved areas.

Universal health care? Redistribution? Government-funded child care for everyone? None of those phrases made it into the platform approved in Charlotte, N.C. 32 years later.

The contrast between the Republican platform then and now is even more vivid. In 1980, the GOP championed what seemed like a bold tax cut that would have lowered the rate for the very, very rich to 50% from 75%. By comparison, the Republicans of today won’t even consider allowing the Bush tax cuts to expire, which would raise the very top rate to 39.6% from 36%. (Many in the top 1%, such as Romney, actually pay at a much lower rate.)

The 1980 platform references the goal of equality in pay between men and women and mentions the need for child care. It even includes the words “Equal Rights Amendment,” without expressing an opinion on what became a forlorn quest to amend the Constitution to enshrine equal rights for women. The statement on abortion was surprisingly nuanced:

“While we recognize differing views on this question among Americans in general — and in our own Party — we affirm our support of a constitutional amendment to restore protection of the right to life for unborn children.”

There was no such inclusive language in the platform approved by GOP delegates a month ago in Tampa, Fla. In fact, the section that contained the Republicans’ continued belief in a constitutional amendment to protect the unborn was placed in the context of a reaffirmation of the party’s reading of the Bill of Rights, and asserted as one of the “self-evident” truths enshrined in the Declaration of Independence.

That platform also said that the Ten Commandments should be displayed wherever, that Boy Scouts should not be penalized for excluding gays, and that measures to root out “voter fraud” are absolutely necessary. Apparently, such fraud didn’t exist three decades ago. Some, of course, say it doesn’t exist today.

The 2012 GOP platform also includes a ringing endorsement of a constitutional amendment to define marriage as a union between a man and a woman, a view that wasn’t mentioned in 1980 because, let’s be honest, it didn’t seem that anything else was legally possible at the time. Some may characterize the Democrats’s 2012 embrace of same-sex marriage as a turn leftward, but if so, they go there with about half the American public. Is that a return to liberalism, or a recognition that, on this issue, the center has moved?

And what about Israel?

This year, for all the noise made about the Democrat’s baffling omission of a statement on Jerusalem and their clumsy attempt to rectify it, the resulting platform reads much like the Republicans’. Both parties affirmed their commitment to Israel with only slightly different adjectives: “unshakeable” for the Democrats, “unequivocal” for the Republicans. They both call on Palestinians to recognize Israel’s right to exist and to reject terror. And with those caveats, they both call for an independent Palestinian state.

How far each has come since 1980! Then, both parties were adamantly opposed to an independent Palestinian state and against negotiating with the Palestine Liberation Organization. Naturally, the Democrats crowed about Carter’s triumphant work leading to the 1979 Camp David Accords and a peace treaty between Israel and Egypt that even in these fraught times appears to be holding. Republicans applauded the “vision and courage” of then-Egyptian President Anwar Sadat, but otherwise steered clear of the issue.

Both parties said that Jerusalem should remain “undivided,” with free access to people of all faiths.

No mention of it being the capital of Israel.

The unmistakable message is that much as Democrats and Republicans differ on domestic issues, their attitudes toward Israel seem remarkably similar. At least if you think the words matter.