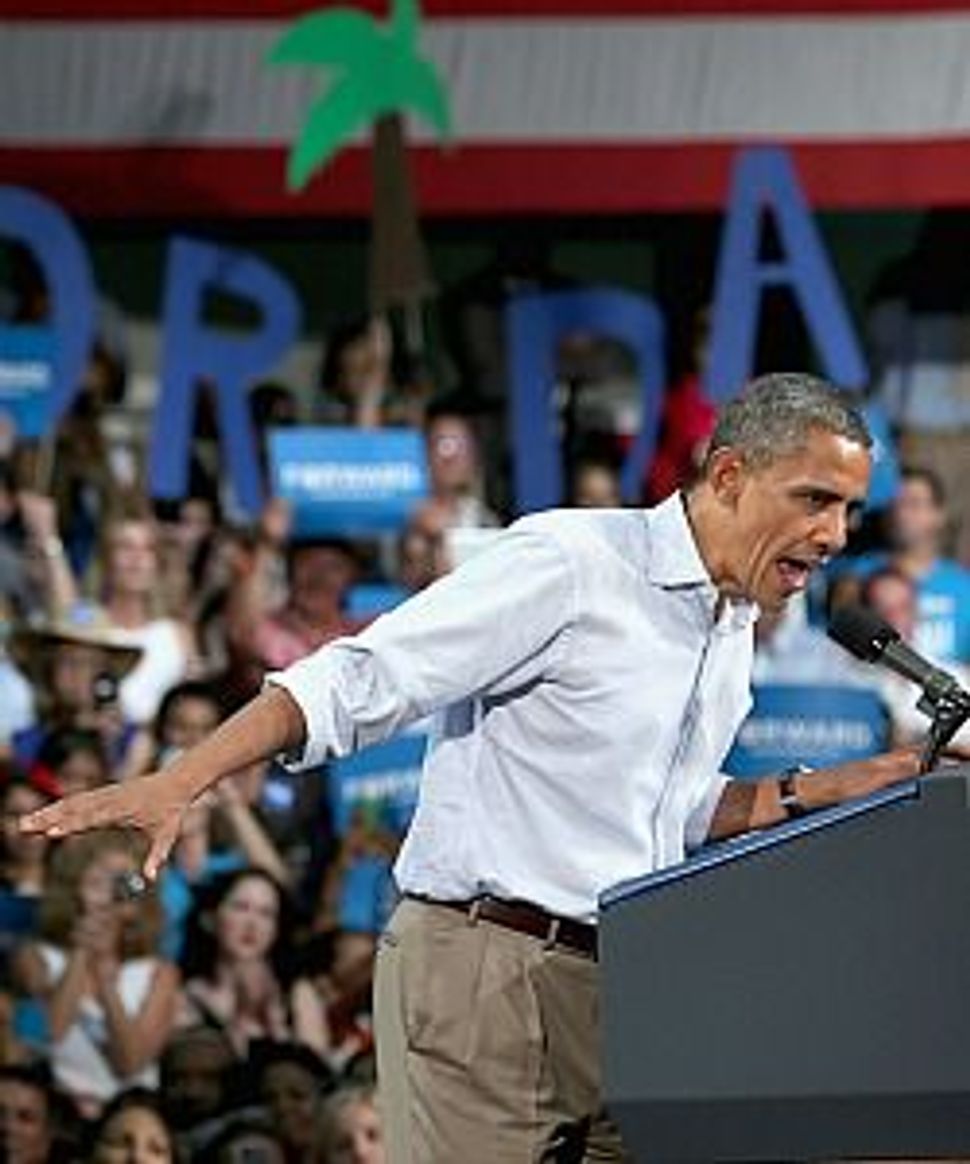 Florida Jewish voters, viewed as crucial in determining the outcome of the November elections, will vote overwhelmingly for Barack Obama, according to a new survey of the state’s Jewish voters commissioned by the American Jewish Committee.

The poll conducted between September 7-9 and released Thursday, found that support for Obama among Jewish voters is down from an estimated 74%-to-78% in the 2008 elections to an expected 69% this year. Romney, according to the poll, which included 254 registered Jewish voters, will win 25% of the votes, up from an estimated 21% won by Republican candidate John McCain in 2008.

The survey has both good and bad news for Democrats. On the positive side, it suggests that Florida Jews fall in line with the national Jewish population which according to the latest Gallup tracking poll will give Obama 70% of its support with only 25% of Jewish Americans voting for Romney. Democratic strategists have long argued that Jewish support ranging from the mid 60’s to the low 70’s would be a satisfactory outcome in this elections cycle.

On the other side, given the tight race in the state, a loss of even few percentage points could mean tens of thousands of voters. Data presented at the recent Democratic convention in Charlotte stated that a drop of 10% in Jewish votes in Florida would translate into a net loss of 85,000 voters. While the baseline for comparison is not clear (data on Obama’s success among Jewish voters in 2008 varies from 74% to 78%) the new poll represents a 5%-to-9% decline in Jewish support.

Even that dip could make a difference if Florida turns out to be as close as many pundits expect.

Digging into views of Jewish Floridian voters, the AJC poll found that just like the general American population, Jewish voters too see the economy as the most important issue in deciding how to vote. 54% of Jews in Florida named the economy as the leading issue, followed by healthcare (15%). Issues relating to Israel were seen as a deciding factor only by 5% of voters. When asked to rank the second and third most important issue, Israel emerged as being in the third place for deciding issues.

Obama won high approval ratings from Jewish voters in Florida on national security issues (76% approve – 22% disapprove), on healthcare (69% to 28%) and on the economy (64% to 33%). When it comes to his dealing with Israel, Obama got a 61% approval rate with 33% disapproving. Jewish voters in Florida seem to prefer the way Israeli prime minister Benjamin Netanyahu is dealing with the relations between the two countries. 72% of voters approve of Netanyahu’s handling of the relations while 21% disapprove.

The data comes on the day a new TV ad began to run in Florida, highlighting the differences between President Obama and Prime Minister Netanyahu’s views on Iran. The ad stars Netanyahu speaking out about the need to take action against Iran without delay. “The world needs American Strength. Not apologies” the caption reads at the end of the TV ad, which was produced and sponsored by a group called Secure America Now. The organization describes itself as a non-partisan grassroots coalition supporting “policies that will protect our nation against terrorist infiltration, attack, and capitulation to our enemies.” It was founded by pollsters John McLaughlin and Pat Caddell but it is not require to disclose the identity of its donors.