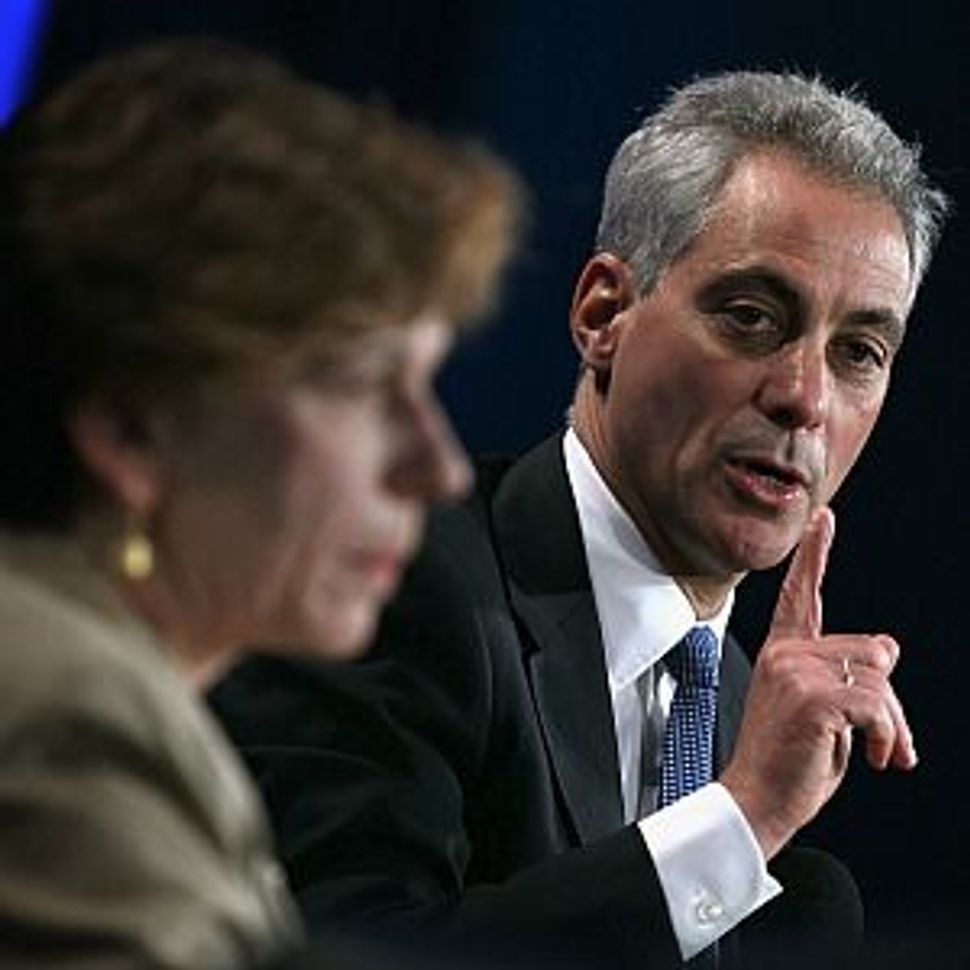 The Chicago teachers strike ended with what many unionists see as a victory for a strategy of confronting strong-willed Mayor Rahm Emanuel.

It also helped get national teachers union chief Randi Weingarten out of a tricky political jam.

Weingarten, the head of the American Federation of Teachers and one of the nation’s top Jewish union leaders, found herself torn between backing striking teachers and avoiding a politically damaging confrontation with her allies, Emanuel and President Barack Obama.

The national leader gave the Chicago Teachers Union support in the run up to the strike. But Weingarten also made a high-level appearance with Emanuel in June, which to some made her look far too cozy with management. Plus, she spent the week prior to the strike in Charlotte attending the Democratic National Convention, time that could have been spent mobilizing on the ground.

Chicago teachers are surely aware that Weingarten has duties to her allies in the Democratic Party. But from a traditional labor point of view, negotiations and preparing for the strike should have been her top priority.

“When your family members are involved you should (never) stay out of it,” said Xian Barrett, who teaches high school social studies in Chicago. “We’re seeing billionaires buying up our education system. The national leadership should take a more aggressive strategy to organizing against this attack on public education.”

Weingarten did, in fact, praise the news of the union agreeing going to back to work (a ratification vote is expected for early October).

“What’s happened in Chicago has changed the conversation and shown that, by communities uniting and acting collectively, we can transform our schools and guarantee every child the high-quality public education he or she deserves,” she said in a statement.

And in a press conference with education advocates from across the country, including CTU President Karen Lewis, on Sept. 21, Weingarten committed the national union to working with parent and community groups to fight education “privatization.” The national and local teachers unions undoubtedly share an interest in fighting plans to dramatically expanding charter schools and offer vouchers for private and parochial schools.

“Real public education reform comes from the bottom up, with teachers, parents and communities working together to help all children thrive,” Weingarten said.

Labor experts say it shouldn’t come as a big surprise that one of the biggest public sector strikes in recent memory involved teachers.

“Teachers have been some of the striking-est workers in history,” according to Kate Bronfenbrenner, the director of the Labor Education Research at Cornell University’s School of Industrial and Labor Relations.

But demographics in the teaching profession have changed, and the CTU was able to link the cause for a fair contract with racial equality in education. And Lewis’s militant leadership puts her squarely at odds from Weingarten’s style of cultivating close relationships with management and pursuing a national political profile.

“The leadership of [the CTU] as well as the membership understand the program of the national AFT is not going to meet their needs,” said sociologist Stanley Aronowitz of the City University of New York Graduate Center.

Richard Kahlenberg, a senior fellow at the Century Foundation who has written extensively on education, said that Weingarten may be able to use as the strike as leverage while bargaining on education policy at the national level.

“She’s getting all sorts of pressure from the center and right to be more accommodating to changes in how teachers are evaluated and accepting charter schools and those sorts of things,” he said. “In that position one needs to be able to say: ‘I’ll go so far but my members are not going to go completely in your direction.’”

Putting the teachers back to work, and preventing lasting damage to Rahm Emanuel and Barack Obama may just put her in the catbird’s seat moving forward.

“(It) makes it easier for Randi Weingarten to travel that path of strong union leader and education reformer,” he said.