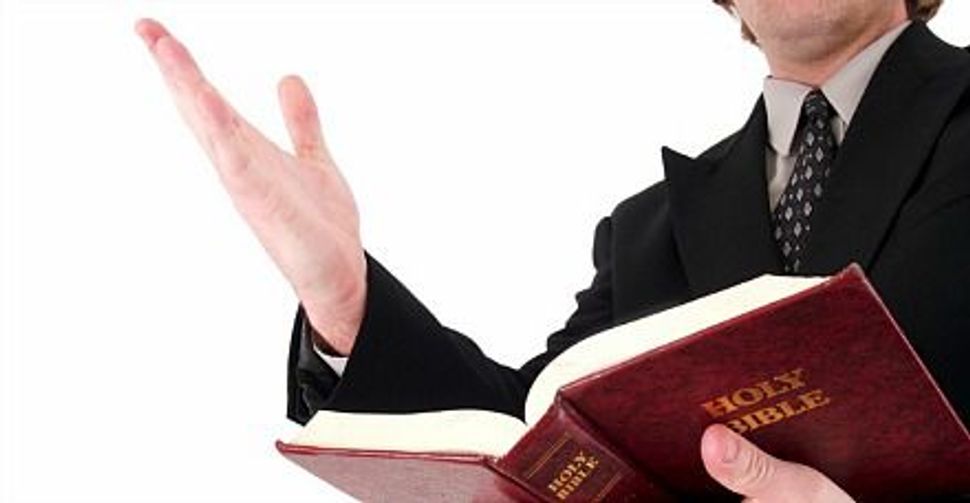 October 7 is Pulpit Freedom Sunday, when hundreds of pastors are expected to openly violate the law of the land and preach politics from the pulpit. The law they intend to violate is known as the Johnson Amendment. Enacted in 1954 and sponsored by then-Senator Lyndon B. Johnson, it limits the amount of political activity churches, charities and any other 501(c)3 non-profit organizations may engage in while claiming tax-exempt status.

In 2008, when Pulpit Freedom Sunday began, 33 pastors participated; last year, organizers said the number swelled to 539. Who knows how many more will join the call in this partisan-charged year? Just in the last few weeks, a Catholic priest in Texas told his parishioners in writing not to reelect President Obama, while priests in Wisconsin are holding weekly “rosary rallies” to pray for GOP vice presidential candidate and native son Paul Ryan.

The Catholic church admonished its Texas priest but so far the Internal Revenue Service has taken no actions against these flagrant acts, either by design or by indifference. That has only encouraged those who believe that their First Amendment rights are unfairly denied because they can’t use their sermons as campaign advertisements. Nonsense. Non-profit status is a privilege, not a right, and with it comes the prohibition against overt partisanship. (That is why the Forward, also a 501(c)3, does not endorse candidates on these pages.)

But where should these restrictions begin and end? What about clergy who engage in politics away from the pulpit?

It’s a live question this year, what with Rabbis for Obama and rabbinic all-but-endorsements for Mitt Romney. The advent of new technology has enabled anyone, clergy included, to broadcast their support of a political candidate, take partisan stands in public, and promote fundraisers on Facebook. Even if this activity is legal, is it right?

It’s certainly not popular. In the national survey that provides the basis for their seminal book, “Amazing Grace: How Religion Divides and Unites Us,” Robert Putnam and David Campbell argue that “Americans overwhelmingly disapprove of political persuasion by religious leaders.” This opposition is both deep and broad, and does not vary much by religion. Evangelicals don’t want to hear politics from their pastors (75%) anymore than Jews want to hear it from their rabbis (77%).

Interestingly, Jews report the highest level of political sermons among the religious groups surveyed, with 50% saying that they hear such sermons at least monthly. Mormons report the lowest amount, 10%, though this data is from 2006, before Romney’s nomination.

And notwithstanding the clearly right-leaning motives behind Pulpit Freedom Sunday, Putnam and Campbell’s research contends that it is liberals who get more politics at church than conservatives. “[T]hese results might seem surprising,” they acknowledge. “Isn’t it the right, not the left, that draws on churches to mobilize its political troops? A longer historical view, however, reminds us that many denominations have long been catalysts for political action on socially progressive, left-leaning causes.”

This recalls what is so noble about the involvement of religious leaders in social justice causes — from opposing slavery to marching for civil rights, from Soviet Jewry to Darfur — but it also highlights the troubling dilemma of where to draw the line. What bothers the left today can offend the right tomorrow. Speaking directly from the pulpit or otherwise using religious authority to promote a particular candidate is an obvious red line. The Johnson Amendment performs a useful civic function and, not incidentally, mirrors the opinion of the American people.

Religious leaders who use their position to promote candidates and partisan causes off the pulpit must do so judiciously, however, recognizing that when speaking as individual citizens, their collars or their kippot might still be visible, even in the mind’s eye. Faith has an essential place in the public square, but its role should be more prophetic than partisan.