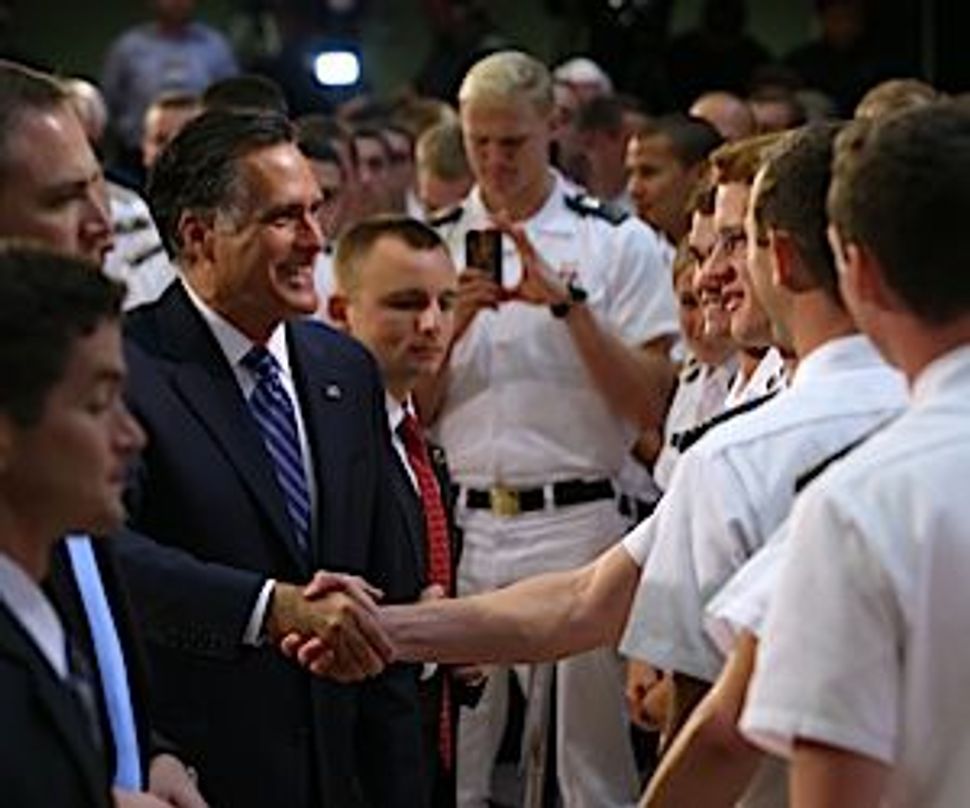 Republican candidate Mitt Romney came out swinging Monday at President Obama’s foreign policy, promising to end any “daylight” between the United States and Israel and a tough stance toward Iran.

Speaking at the Virginia Military Institute, Romney sought to present Obama’s Middle East policy and his response to the Arab Spring as lacking leadership.

As in previous foreign policy addresses, Romney spent time criticizing Obama for his tense relationship with Israeli prime minister Benjamin Netanyahu. “The relationship between the President of the United States and the Prime Minister of Israel, our closest ally in the region, has suffered great strains,” Romney said. “The President explicitly stated that his goal was to put ‘daylight’ between the United States and Israel. And he has succeeded.” Romney argued that this daylight has “emboldened our mutual adversaries, especially Iran.” He promised that if elected president “the world will never see any daylight between our two nations.”

On Iran, Romney said he would “put the leaders of Iran on notice” that they will be prevented from acquiring nuclear weapons capabilities. The use of the term “capabilities” is seen as a nod to Israel which had pressed the United States to block Iran before getting nuclear “capabilities” rather than “nuclear weapons,” the term currently used by the administration. Romney also said he would move two aircraft carriers to the region on a permanent basis and tighten sanctions against Iran. “For the sake of peace, we must make clear to Iran through actions — not just words — that their nuclear pursuit will not be tolerated,” Romney said.

In a brief reference to the Israeli-Palestinian conflict, Romney seemed to present a policy opposite to the one he stated privately several months ago. In a fundraising event last May, caught on tape, Romney said there was “no way” to achieve a two-state solution. In his Monday speech, however, the presidential candidate promised to “recommit America to the goal of a democratic, prosperous Palestinian state living side by side in peace and security with the Jewish state of Israel.” He blamed the lack of progress toward peace in the region on President Obama’s policies.

The Obama campaign, in response to Romney’s address, called his foreign policy “erratic” and argued he is surrounded by advisers who are among those “who brought us the eight years of Bush.”

Former Secretary of State Madeleine Albright, speaking on a conference call organized by the Obama campaign, said Romney’s call to condition aid to Arab countries showed “no understanding” of the region. “I just find him very shallow,” she said, adding that if one of her students would hand her a paper similar to Mitt Romney’s foreign policy article in the Wall Street Journal “he’d get a C.”