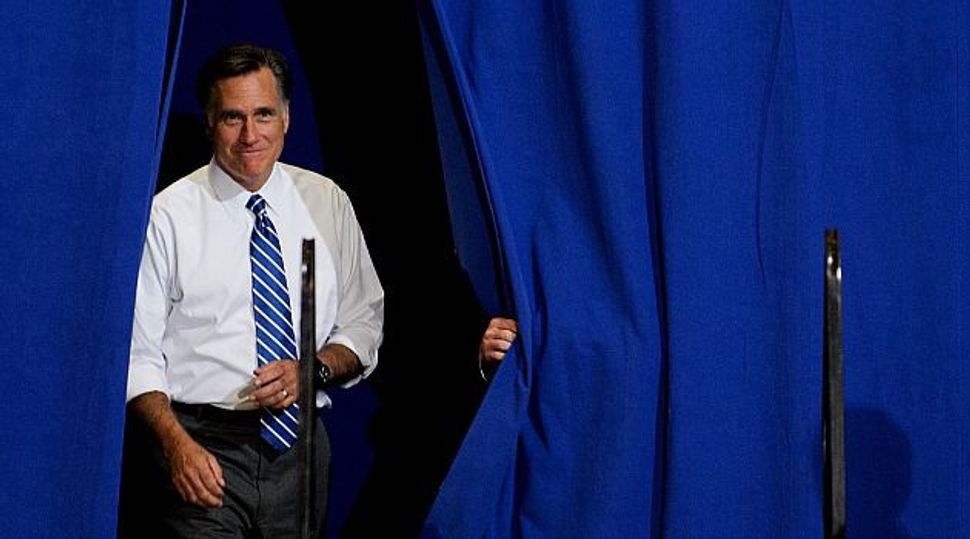 Behind Mitt?s Curtain: The election?s about a whole lot more than Mitt Romney. There?s the Supreme Court and a whole administration on the line. Image by getty images

It’s a wise old rule of the heart, too often forgotten: When you choose a spouse, remember that you’re not just marrying a mate — you’re also marrying into a family.

There’s a corollary that’s worth remembering when you enter the voting booth in November: You’re not just electing a president. You’re electing an administration and the party that will staff it up.

Yes, you’re choosing the person who will answer the phone at 3 a.m. when a crisis erupts in some obscure corner of the world. But you’re also deciding who’s going to be placing that phone call and, in a broad sense, determining what that person will likely say to the sleepy, confused leader who’s just been jolted awake. How will the choices be framed? Will we try negotiating or immediately start bombing? And if we’re bombing, will we bomb the right country?

You’ll be choosing a head of the Securities and Exchange Commission, which is supposed to police Wall Street unless it decides to close its eyes and let the gamblers run the table. You’re choosing a head of the U.S. Forest Service, which protects national forests from developers, unless it’s headed by developers, and of the National Oceanographic and Atmospheric Administration, whose scientists keep track of the terrifying trends in the earth’s climate while dodging the anti-science bullies of the Republican Congress.

You’re choosing the head of the Federal Emergency Management Administration, which was led at a key point during the last Republican administration by one Michael “Brownie” Brown, whose professional background was in show-horses, a pursuit that seems to have quite a following among Republican politicians.

You’re choosing a pool of Supreme Court nominees. The next president will likely decide whether the court’s pro-life faction is enlarged to the point where it can overturn Roe v. Wade. Ironically, this is the same pro-life faction that would rather risk executing an innocent man than risk setting a murderer free.

And you’ll probably be choosing a foreign policy team that yearns to resurrect the cowboy diplomacy of the George W. Bush administration, which did so much to discredit American leadership in Europe, the Middle East and elsewhere. It was the Bush administration that sent in the troops to democratize the Mideast, despite warnings that it was opening the door to Islamist takeovers. It was the Bush administration that toppled Saddam Hussein, Iran’s main regional enemy, thus unleashing Iran as a regional superpower, and then sulked in the corner while the European allies tried jawboning Iran into dropping its nuclear program.

It wasn’t until Barack Obama became president that Washington was able to forge a broad-based international anti-Iran coalition. Obama played out negotiations that exposed Iran’s intransigence and thus united most of the world behind crippling sanctions. The current Republican team talks, incredibly, about going back to the Bush plan.

A great deal has been written about the derangement of the modern Republican Party, with its toxic mix of legislative obstructionism, anti-tax and anti-regulation economics, religious-right social policies and blustering foreign policy. It’s easy to lose sight of the fact that these were really separate threads that emerged at different times and came into full expression only during the Obama presidency. They needn’t necessarily survive intact in a new GOP administration. But they might.

Current Republican economics is a legacy of the Reagan administration. Before Ronald Reagan’s inauguration in 1981, presidents going back to Teddy Roosevelt understood that capitalism is fundamentally amoral and needs to be regulated. Unchecked, business excess leads to vast human misery. A steady accretion of progressive taxation, labor protection, strong regulation and basic social insurance led to decades of smooth growth and widespread prosperity.

Reagan famously preached that government itself was the problem. Over eight years he cut the top tax rate from 70% to 28% and greatly reduced regulation to free up business. The result: three decades of steadily mounting government debt, spiraling inequality and an increasingly unstable business cycle.

There was a cynical aspect to the strategy. The best way to prove that government was bad was to govern badly. By gutting business regulations and then appointing pro-business officials to do the regulating, the idea that government could improve the average citizen’s life was discredited.

In reality, reducing government was only a slogan. Alongside reduced business regulation, the Reagan revolution tried to expand government intrusion in private lives. The goal was to get government out of the marketplace and into the bedroom.

It was encouraged through judicial appointments and a Justice Department that coddled anti-abortion radicals. Overall, though, GOP governing coalitions were dominated by economic and foreign-policy conservatives with moderate social views, leaving religious conservatives frustrated and grumbling.

As for gunboat diplomacy, it’s mainly a product of the George W. Bush administration. The Reagan administration talked tough, but its actual record was a mixture of diplomatic realism, covert action and hedged bets. The goals were audacious, but a certain deference was maintained to the rules of the game. Relations with allies were never allowed to fray. It wasn’t until Dubya that Washington decided rules were for sissies.

It’s conceivable that a Romney administration would restore some of the propriety of earlier Republican administrations. It could keep the religious right on a short leash. It could learn some of the lessons of the disastrous Reagan-Bush economic record and the Bush diplomatic fiasco. But there’s no reason to believe it will.

Just look at Romney’s leadership field. In the GOP-led House of Representatives, Space, Science and Technology Committee Chair Ralph Hall of Texas believes human activity can’t impact the global climate because “I don’t think we can control what God controls.” Science investigations and oversight subcommittee chair Paul Broun of Georgia said in a September 27 speech that he believes “the earth is about 9,000 years old” and “was created in six days as we know them,” and that “evolution, embryology, Big Bang theory, all that is lies straight from the pit of hell.”

The farm team is even weirder. In Arkansas, the GOP-led legislature has a pair of members, Jon Hubbard and Loy Mauch, who are openly nostalgic for African-American slavery (you read that right), and a former member running for his old seat, Charles Fuqua, who favors enacting the biblical law of executing “rebellious” children by stoning.

This, then, is the crux of the choice this November: Whether to entrust our government to a party that believes in sensible governance or one that doesn’t. It would be better if we had two parties with two rational approaches to governing, rather than one that’s for it and one that’s against it. Competition is a good thing. But that’s not on offer.