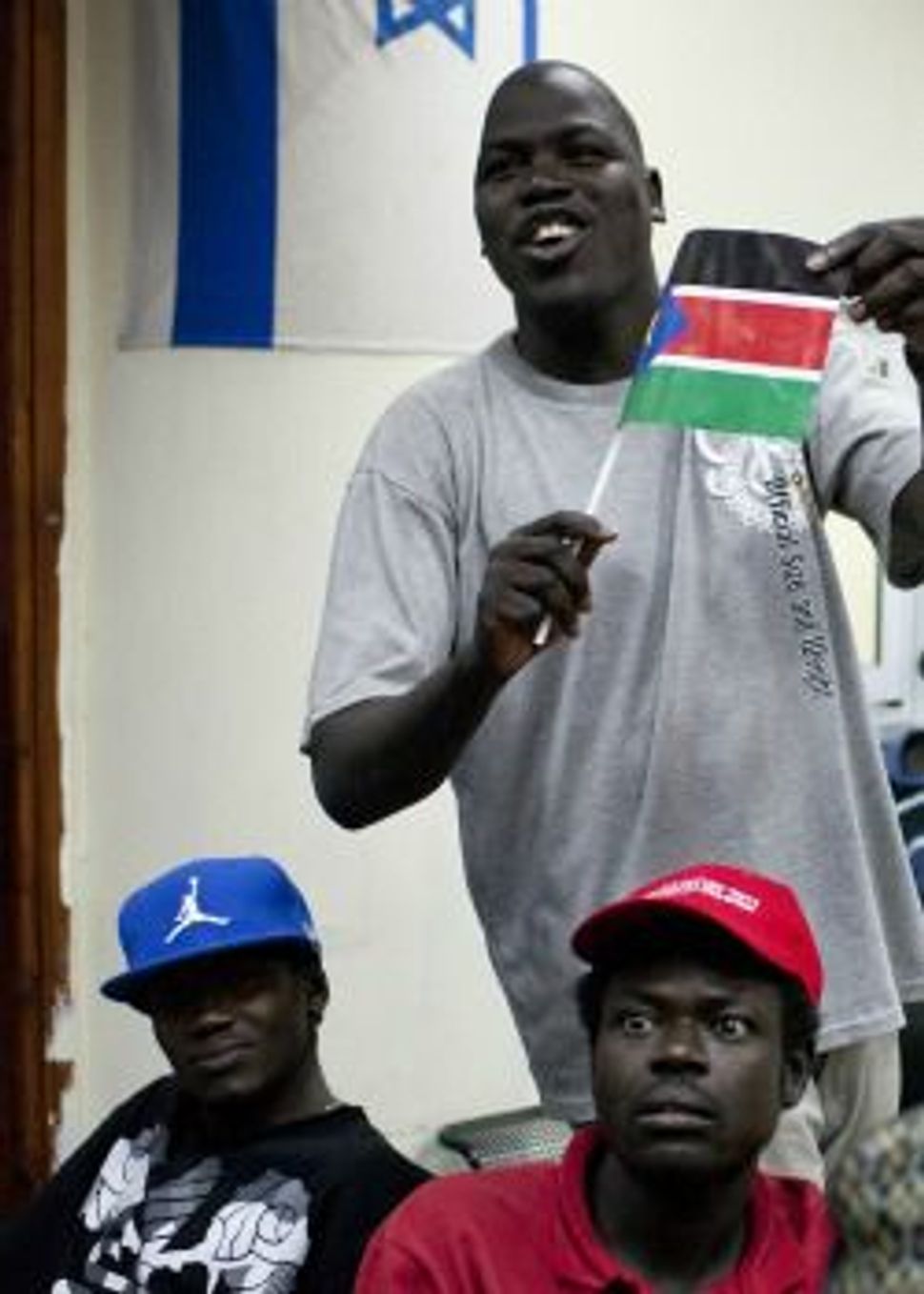 Two Flags: Immigrants from South Sudan meet over Israeli efforts to deport members of their community. Image by getty images

Not sure what’s less democratic here: an inhumane plan to indefinitely detain 15,000 people (and eventually many thousands more) or the fact that a cabinet minister thinks he can make executive decisions about entire populations of people in Israel.

Seven Israeli non-governmental organizations have filed two petitions to the Jerusalem District Court last week in response to the announcement. The first is against the October 15 detention plan. It’s been filed against the Ministers of Interior and Defense and the legal counsel of the Israeli government.

The second petition asks to rescind the Anti-Infiltration Law, which allows for the indefinite detention of all non-Jews who enter Israel asking for asylum for three or more years without due process. It has been filed against the Knesset, the Ministers of Defense and Interior, and the legal counsel of the Israeli government by the seven NGOs as well as five Eritrean asylum seekers.

Yishai’s detention plan is problematic because it is not an official government decision. No cabinet decision has been made concerning the plan. Israeli and diaspora advocates for immigrants have been asking the Ministries of Foreign Affairs and Justice to reject the plan.

Yishai has made it clear that he plans on making the lives of the African asylum-seekers in Israel as difficult as possible until they leave on their own. Where will they go, however? To Sudan or Eritrea where they will be penalized as traitors for leaving their countries and subsequently tortured, imprisoned, and even killed?

Israel complains that it is receiving a disproportionate amount of asylum seekers, called ‘infiltrators’ by the Israeli government, compared to the rest of the Western world. However, according to a recently published report by the Knesset research center demonstrates that the population of asylum seekers is only 0.75% of the total population of the country, which is proportionately much less than most other countries in the world.

Although the government claims it reviews individual applications for refugee status, this is not actually the case. In actuality, Israel is the only country in the Organization for Economic Co-operation and Development (OECD) that has a policy of collective protection, meaning that it does not review individual cases. It only inquires about country of origin. If the asylum seeker is from Eritrea or Sudan, countries deemed dangerous to return to by international agencies, then they are provided with conditional release visas and permitted to stay in Israel.

Sadly, this problematic policy has the unwanted side-effect of allowing Israel to avoid providing any benefits or rights to the asylum seekers. Since the asylum seekers do not have the right to work, they wind up in a perpetual state of limbo. Israel claims that it is “taking in” asylum seekers, but collective protection is actually a way to ignore the fact that many of the people entering the country are, in fact, refugees and to abide by international standards of reviewing each asylum seeker’s case.

What can American Jews do to prevent this inhumane policy from being implemented? It is imperative that diaspora Jews and allies advocate against the detention policy as much as possible and advocate for a real Refugee Status Determination procedure in Israel. Email or call to Israeli officials in the Ministry of Justice, Ministry of Defense, Ministry of Foreign, and Ministry of Interior as well as contacting local Israeli consulates and the Israeli Embassy in the U.S.

Maya Paley is a Los Angeles-based activist and co-founder of Right Now, an international, volunteer-based coalition advocating for the rights of the African asylum seekers in Israel. Learn more at <www.asylumseekers.org>.