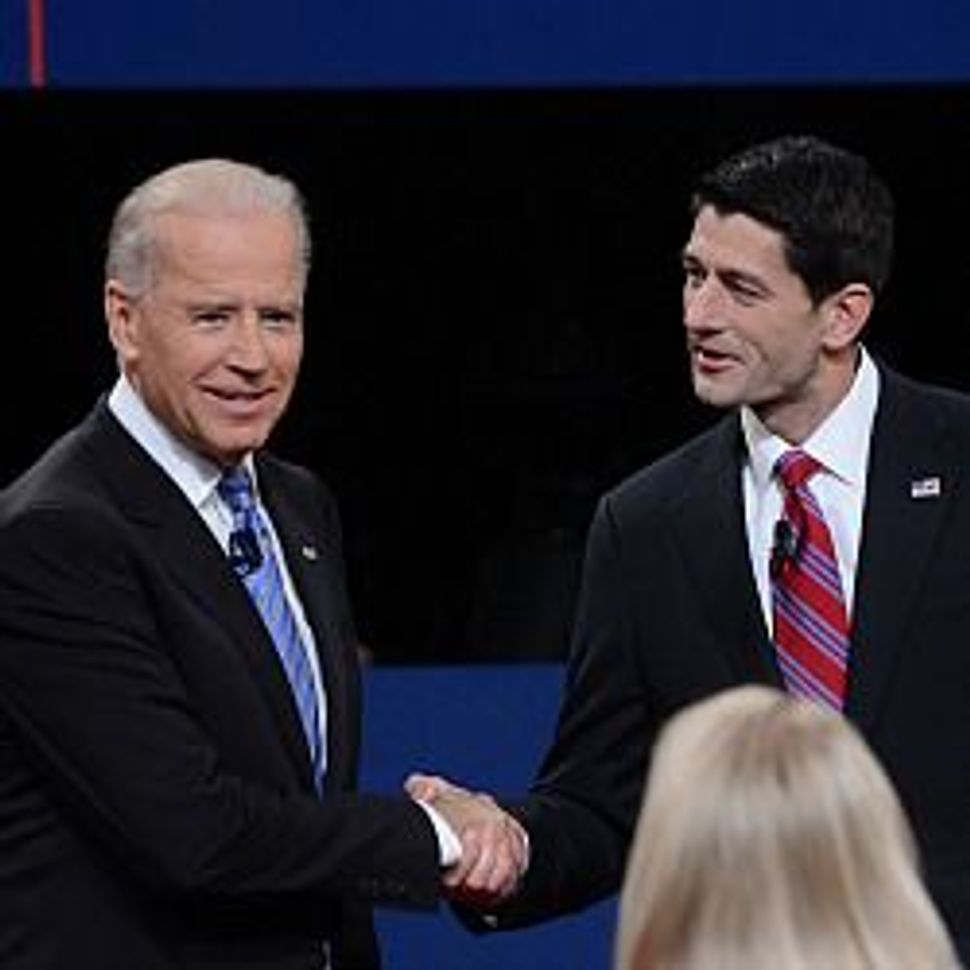 Wiping the sweat from my forehead after a much, much more engaging debate, and just have a few thoughts to share.

1) It was not boring. Between Joe Biden’s fulminating about Paul Ryan’s “malarkey” and the appearance of actual, warm blooded conversation between two men with opposite worldviews, it was impossible to tear your eyes away from this one. This was, of course, a sharp contrast with the last debate, which seemed to disappear into the weeds way too often.

Here both candidates connected with the audience and with each other. Will it have the game changing effect of the first debate? Probably not. These are the vice-presidential candidates, after all. But for the Obama campaign, it did probably staunch the bleeding.

2) Charming attack dog. Biden did exactly what he was supposed to do. He attacked, exhausting every Irish euphemism for baloney that he had in reserve. The greatest casualty of Obama’s listless debate performance was the depletion of excitement among Democrats. Biden helped to correct that.

One answer, early on, included the words “47%” and “Mitt’s taxes” within seconds of each other, causing Democratic debate watching drinking parties to get immediately sloshed. The only question — the one Republicans surely want us to be asking — was if he was too aggressive, if there was too much eye rolling and interrupting. As a son of Israelis, I can say that this is what normal conversation looks like at my family’s dinner table. Hard to say how the rest of America might perceive it.

3) Contrasts. There were some real moments of contrast tonight, particularly on issues that weren’t even touched on in the first presidential debate. Abortion comes immediately to mind. They each presented distinct and dramatically different views on whether abortion should be legal, and Biden reminded viewers about the president’s role in appointing Supreme Court justices who will decide on this question.

Particularly with these social issues, there are sharp distinctions to draw, and it is here where it will be more harder for Mitt Romney to tack to the middle as he seems to be trying to do in the closing days of the campaign.

4) All about Raddatz. What a difference a moderator makes. Martha Raddatz asked good, tough questions of both Ryan and Biden. She moved it along, was not afraid to interrupt them or ask follow-ups that forced them to respond – and she covered a lot of ground.

It was refreshing to see someone interested in ferreting out the facts and not just letting the two candidates knock off tired talking points. Not surprising, I guess, that one of the memes on Twitter was people wondering if she could be nominated as veep.