What Is the ‘Jewish Vote’? 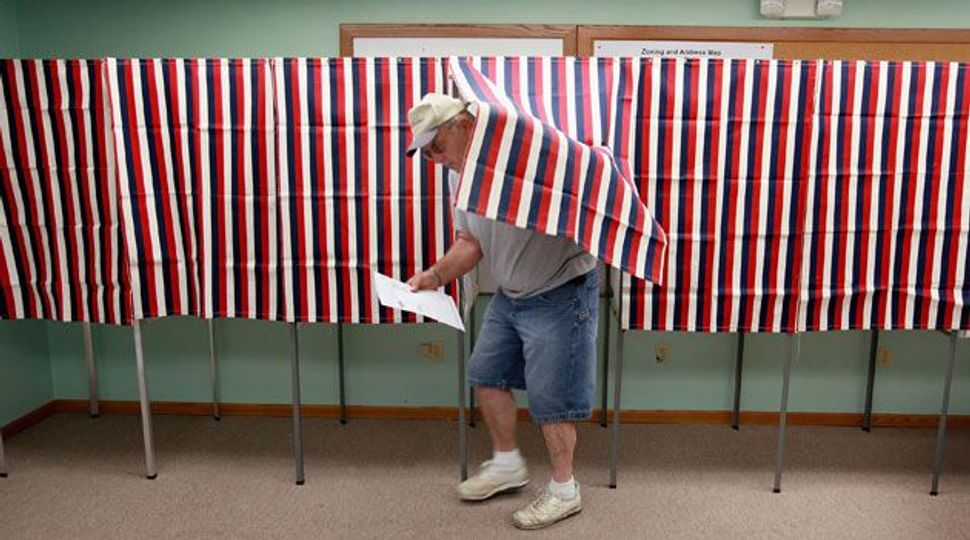 No one can say whether the Jewish vote actually exists. Jews vote, but not as a block. Thus, the idea of a distinctly Jewish vote is, in a way, a mirage, more in our heads than in the heads of voters as they go to the polls. The Jewish vote is the accumulation of votes cast by American Jews. That’s as objective a description as anyone could offer. But in southern Florida, where Election Day is looming larger than other places where Jews reside — say, New York or Los Angeles — the Jewish vote is much more than that: It’s also a political aphrodisiac. It has the smell of promise and the power of evasiveness and mystery. The Jewish faces around here are usually older faces, but the Jewish vote feels as vibrant and unpredictable as the youth.

I’ve spent the past decade immersing myself in the study of the Jewish vote — investigating it, writing about it, speculating, joking, doubting, interviewing, reading, talking, wasting time as I was obsessing about it. A couple of weeks ago I even published a short book about it.

It is we — the Jews — who need the Jewish vote much more then the candidates and the pollsters and the pundits and the political hacks. We need it as one among not many means of proof that we exist as a community, as a living societal organ, as a group. We need it to make us feel different and, at the same time, to make us not seem too different, too separate.

We need it because in this modern world of Jewish acceptability and social blending, not much is left to define us as a group. Yes, we celebrate the same holidays, but that is a religious identity, not exactly a communal one. And we — well, most of us — worry about other Jews in Israel and elsewhere. But this worry, if executed properly, connects us to a larger group of world Jewry, and not to a local community of Jews. Of course we don’t all agree on the specifics of political agendas, but being part of a vibrant, shifting, chaotic “vote” forces us into a group that is markedly Jewish and markedly American and markedly ethnic. And we need it, because we don’t want to be Jews just religiously or to be ethnically defined only in relation to the distant Jews of Israel or Argentina or France.

I write “we,” but really mean “you” — American Jews. As an Israeli, I study the Jewish vote with a great sense of affinity and even emotion, but also behind a double-fenced distance: the distance of the journalist-scholar and the distance of the non-American. At times I think about the Jewish vote as if I have a stake in it, when I really don’t. At times it makes me attentive. At times, I’m afraid, it can make me look pathetic. I can’t do much about it: The Jewish vote fascinates me, and it is also a useful tool for me. It’s one of the best topics with which to lure suspicious Floridian Jewish voters into a heated conversation.

In my book, I compare the Jewish vote with that of the good people of Iowa: “Such a tiny fraction. And yet such an inflated sense of importance.” In both groups of voters, I see what I tag the “bellwether factor.” Jews, much like Iowans, are seen as major political players because they believe that their vote really counts, because they project self-importance. They might not tip elections, but they appear as if they can. Historian Jonathan Sarna, in an article titled “The Jewish Vote in Presidential Elections,” explained that “about 30% of Jewish voters may be characterized as swing voters, swayed by general as well as Jewish issues, particularly the economy, Israel, and church-state issues. When the majority of these voters swing toward the Republicans, it sends a warning to the Democratic Party.”

Such a “warning” might come in many guises. In a post-2008 election conference call with Jewish Republicans — who had to face the undeniable truth that a vast majority of Jews had, yet again, voted for the Democratic candidate — the Republican Jewish Coalition leaders had an interesting case to make. Because of our fierce campaign to sway Jewish voters, they said, the Democrats had to invest much more effort in the Jewish vote this time. Moreover, the concerns the Democrats had about Obama losing Jewish voters made the candidate more prone to give pro-Israel speeches. In essence, the Jewish Republicans were trying to take some of the credit for the making of the pro-Israel Obama. And that’s not as preposterous as one’s initial gut response might dictate. Politicians understand pressure: Obama was pressured, so he made the necessary adjustments — namely, he was more attentive to Jewish concerns, or at least more attentive to the fact that voters needed reassuring.

Obama could have easily won the 2008 election without the Jews, but losing Jewish voters would have projected badly on him, would have raised doubts, would have provoked unnecessary negative attention. Obama wanted to get the Jewish vote; all candidates want to outperform expectations with Jewish voters, for the same reason that they all want to exceed expectations in Iowa. The Jewish vote is a symbol. For Democrats, who get the majority of it, it is a symbol of tradition and well-being. For Republicans, struggling to increase their share, a symbol of possible success with the general public.

That is not to say that where the Jews go, America also goes. But it is interesting to note that when it comes to the Jewish vote, there’s a big difference between 30% of Jews voting for a losing GOP candidate and 30% of Jews voting for a winning GOP candidate. With winning candidates, it does happen from time to time: the 1988 Bush, the 1980 and 1984 Reagan, the 1972 Nixon, the 1952 and the 1956 Eisenhower. Whereas the last losing GOP candidate to get more than 30% of the Jewish vote was Charles Evans Hughes, in 1916. So you see, if Mitt Romney gets 30% or more of the Jewish vote — not an easy benchmark — it is almost like an insurance policy against losing. Or, as I say in the book, “it could be the end of a very long political tradition.”

What Is the ‘Jewish Vote’?