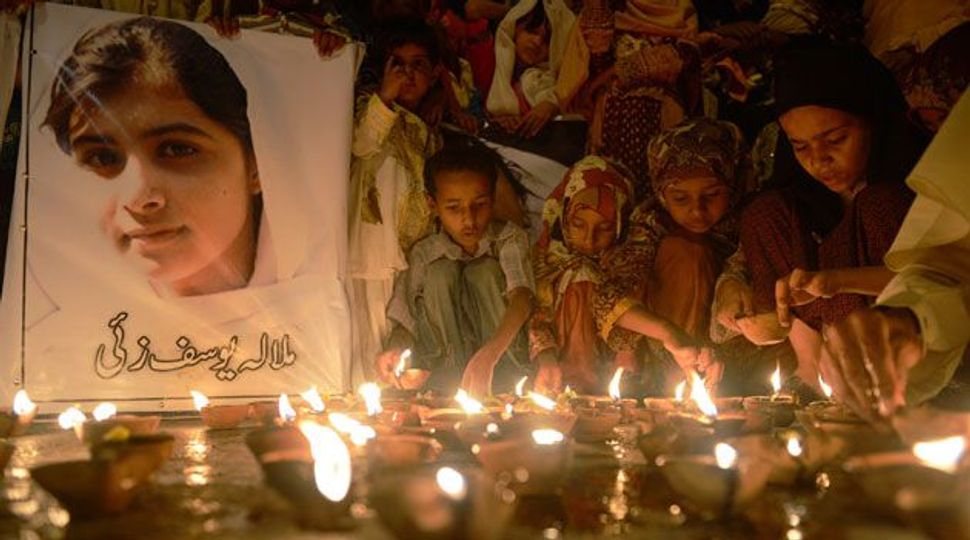 Pakistani children place oil lamps next to a photograph of child activist Malala Yousafzai, who was shot in the head in a Taliban assassination attempt. Image by getty images

Nearly 11 years ago, flushed with what we thought was victory over the Taliban, then-first lady Laura Bush led a noble campaign to highlight the poverty, violence, poor health and illiteracy endured by the women of Afghanistan. “That regime is now in retreat across much of the country, and the people of Afghanistan, especially women, are rejoicing,” she said in a November 17, 2011, radio address. “Afghan women know through hard experience what the rest of the world is discovering: The brutal oppression of women is a central goal of the terrorists.”

Sadly, it still is.

As the dramatic story of Malala Yousafzai illustrates, the Taliban are not content with continuing to make miserable the lives of women in Afghanistan, where just this summer a woman was publicly executed after being accused of adultery. They are also terrorizing the neighboring Swat province in Pakistan, barring girls from attending school, blowing up classrooms and resorting to brazen steps when anyone dare disagree.

Brazen, as in trying to murder an outspoken 14-year-old girl on the streets in front of her friends simply because she eloquently argued her right to go to school.

With her eloquent English and a cherubic face now wounded by gunshots, Malala has become the symbol of gender violence in her country, a rallying cry, an unwitting celebrity of sorts — the Anne Frank of Pakistan, as Laura Bush called her in a recent Washington Post column. But it is a mistake to focus only on her. In July, another Pashtun woman, Farida Afridi, a women’s rights worker, was killed by unknown gunmen on her way to her office.

“The stories of Malala and Farida depict the broader, and frankly confusing, struggle in Pakistan between progressives and extremists,” wrote Pir Zubair Shah, the Edward R. Murrow press fellow at the Council on Foreign Relations. Concerned governments and NGOs must tred carefully, mindful of the vast regional and class differences that bedevil this unruly country, where a woman has been elected prime minister but where literacy among women in rural areas is as low as 7%. According to UNICEF, girls from poor families in rural areas of Pakistan receive on average just over a year of education, while boys from wealthy urban families receive more than nine years of schooling.

“It’s incumbent on all of us to ensure that every child has access to education,” Caryl Stern, president and CEO of the U.S. Fund for UNICEF, told the Forward. Her organization knows the risks in that simple assertion: Perseveranda So, a 52-year-old woman from the Phillipines who served as chief of education in UNICEF’s Islamabad office, died in June 2009 along with other humanitarian workers in a hotel bombing in Peshawar. That troubled city was also where Malala once led a delegation of children’s rights activists, sponsored by UNICEF, that made presentations to provincial politicians.

“This should not be a story about murder. It is a story about education. Equity in education is a tool to interrupt the cycle of poverty, bullying, hate. Put a girl in school and she will marry later, survive longer, be better nourished, provide better for her children,” Stern emphasized. “The sad thing is that the world has left it to a child to fight that battle, when we all should be doing it.”