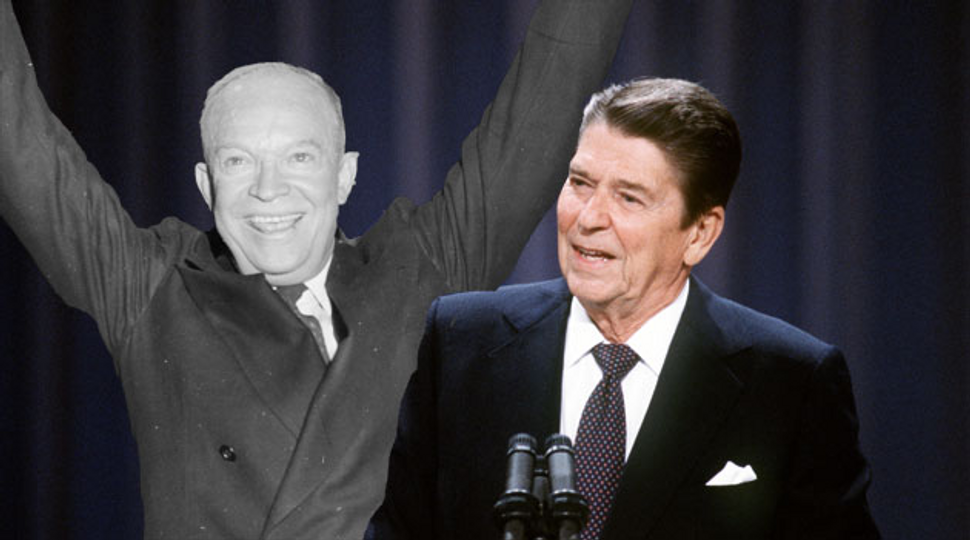 For all the frantic debate-watching that’s swept the nation this fall, one of the most important debates of the current election season has gone largely unheard. It’s a whispered debate between the two most celebrated Republican presidents of the last century, Dwight Eisenhower and Ronald Reagan, over how to achieve economic growth.

Eisenhower, serving from 1953 to 1961, presided over a top marginal income tax rate of 91%. Reagan, in office from 1981 to 1989, inherited a 70% tax rate and lowered it steadily to 28%. Eisenhower’s presidency saw steady growth, low unemployment, a rising middle-class standard of living and largely balanced budgets. The Reagan years saw growth essentially no better than Eisenhower’s, coupled with high unemployment, stagnant middle-class incomes and a skyrocketing national debt.

And yet, somehow, the lesson we’ve come away with is that low taxes create jobs, boost growth and generate prosperity. Eisenhower’s side — which is to say, the factual case — has made barely a peep.

In certain respects Eisenhower and Reagan are very similar historical figures. Both are remembered as affable, avuncular senior statesmen, born and raised in the Midwestern Corn Belt. Eisenhower was one of America’s greatest war heroes, and Reagan played one in the movies. Eisenhower arguably won World War II, and Reagan is widely regarded as having won the Cold War. They were among America’s oldest chief executives, both entering office in their 60s and leaving in their 70s. Both are popularly ranked among the great or near-great presidents.

As it happens, they’re also similar in their popularity with Jewish voters. Reagan captured 39% of Jewish votes in 1980, dropping to a more modest 33% in 1984. Eisenhower did even better: He won 36% of Jewish votes in 1952 and rose to 40% in his re-election in 1956, the highest share of any Republican before or since, going back to Warren Gamaliel Harding’s 43% in 1920. Eisenhower’s 1956 score is particularly noteworthy because it came just a month after the joint Israeli-British-French invasion of Sinai in October 1956, which enraged Eisenhower and caused the most serious crisis in the entire history of U.S.-Israeli relations. Back then, it seems, a presidential squeeze on Israel was no barrier to popularity with Jewish voters. Memory can play funny tricks on us.

What’s most critical, though, is that both Republican icons presided over economies that grew at an average rate of about 3% per year over the course of their administrations. And this brings us to the debate between them — that is, between their legacies and what they mean. The central question: How best to achieve steady economic growth.

Eisenhower inherited a top marginal income tax rate of 92% from his predecessor Harry Truman when he entered the White House in 1953. He quickly lowered it to 91%, where it stayed until Lyndon Johnson lowered it again to 77% in 1964 and then 70% in 1965.

During his eight years in the White House, Eisenhower managed to reduce the federal deficit by 75% — down to a quarter of the size he inherited — while building the Interstate Highway System and launching America’s space program. GDP growth averaged 3% per year. Unemployment averaged just under 5.5%.

Reagan, entering office in 1981, inherited Johnson’s 70% top marginal income tax rate and immediately lowered it to 50%, then to 38.5% and finally to 28%. His theory was that high taxes stifle economic growth, while lowering taxes unleashes growth and creates jobs.

That’s not to say that Reagan’s top-tier tax cut had no economic impact. The effect was profound. Combined with several other factors, including his slashing anti-union policies, it allowed a near-doubling of the share of total national income going to the wealthiest 1% of the population, from 8.3% of every dollar earned in 1981 to 15.2% in 1988. It also launched the national debt into its unending upward spiral, growing from $998 billion when Reagan entered office to nearly $2.9 trillion when he left.

As for great national projects, the biggest was probably his covert war in Central America (in violation of an explicit congressional ban), the first American war to be financed not from tax revenues but by selling arms illegally to Iran.

The debt has continued to grow, of course, an enduring monument to Reagan’s economic theories. Bill Clinton slowed its growth in the 1990s, raising the top tax rate to 39.6% and closing the annual deficit for four years running. But George W. Bush famously took his foot off the brakes again, lowering the top rate to 35% and boosting the debt from $5.8 trillion when he entered office to $11.9 trillion when he left. Further inflating Bush’s debt were his unfunded Medicare drug benefit and his two unfunded wars. Unlike Reagan, he didn’t even try to close the gap through illegal weapons sales to an enemy. Meanwhile, the share of national income going to the top 1% had risen by 2007 to 23%, nearly triple the level before Reagan took office.

So the next time you listen to a presidential debate, remember that nobody up there is taking the Democratic side. The debate we’re having today is between a robust Reaganism and a faint, timid echo of Eisenhower Republicanism. In fact, when you get down to it, the Democrats can’t even bring themselves to take Eisenhower’s side with any conviction. We’re all touting variations on a flimflam theory that’s been tried and proven a colossal failure.