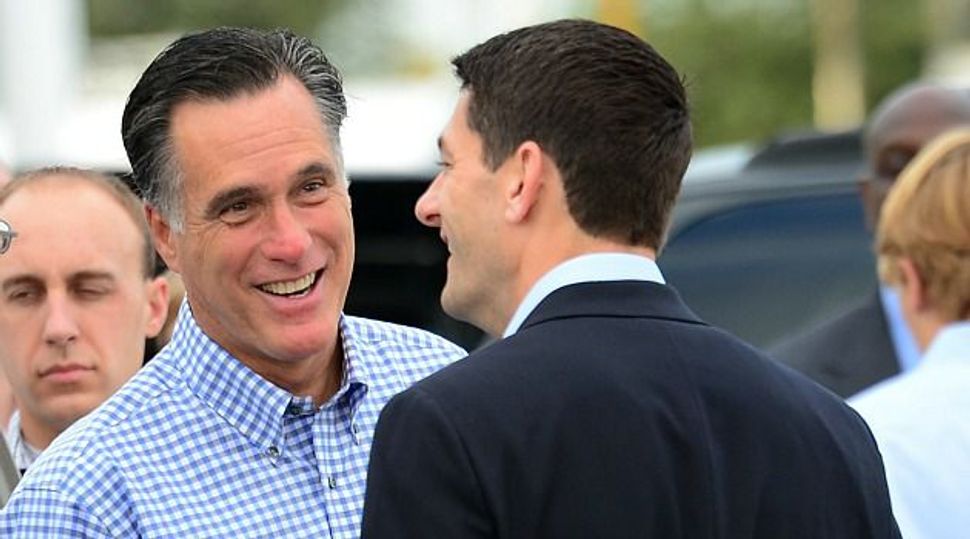 Wrong Vote: Jews may think they can vote for Mitt Romney and avoid the taint of the Christian conservatives who control the Republican Party. They can?t. Image by getty images

As William F. Buckley once reminded us, classical conservatives tended to be anti-Semitic. They looked down on Jews, blacks and immigrants, and had chauvinist ideas about women. It’s part of what being a conservative meant.

That began to change 50 years ago, when neoconservatism — that is, Jewish conservatism — began to take hold. Neoconservatism separated right-wing economic policies from paleoconservatism’s racism, sexism and anti-Semitism. Newly ascendant Jewish Republicans could now associate with the same conservatives who once wouldn’t let them into their social clubs.

But social conservatism never went away. On the contrary, it’s the reason the Republican Party exists today. And Jewish Republicans who prop it up are deceiving themselves.

On the first point, let’s look at the numbers. Republicans came to power in the 1980s because of the “Southern Strategy” — pandering to the racism of some Southerners — and the ascendant Christian Right. Ever since that time, neocons have had to make a deal with the devil. To gain power over economic and foreign affairs, they depend on the same religious (and often racist) paleoconservatives that were supposed to be neo-d out.

This is as true today as it was in 1980. Sure, there are some moderates surrounding Mitt Romney, including many Jews. But they will only gain power thanks to the Republican Party’s extreme Christian Right and Tea Party fringes. Just look at the numbers: Forty-six percent of Americans believe in Creationism. Almost all of them are Republicans; that means that there’s only a sliver of Republicans who aren’t also extremely traditionally religious. Who do you think really calls the shots?

Jewish Republicans may pretend that they’re pulling a lever for smaller government and more free enterprise. But that same lever advances ignorance, theocracy and religious coercion. Of course, most Jewish Republicans don’t favor the Christian Right’s positions. But that’s what a Republican vote means, and to pretend otherwise is just willful ignorance.

Here are three ways it manifests:

When a token Orthodox rabbi appears on a panel of priests and ministers in opposition to contraception coverage, what’s really going on? He’s being used. As long as the photo-op is Judeo-Christian rather than just Christian, then the Republican Party can pretend it’s standing up for “religious freedom” in general. But make no mistake: The Christian conservatives standing next to that rabbi are the same people who want to ban the teaching of evolution in schools, return prayer to public classrooms and make America (once again?) a Christian nation. They don’t have the best interests of American Jews at heart — they’re just using a photogenic Jew as window dressing to cover their radical Christian agenda.

Nor does it matter that Romney himself is a Mormon. If Romney is elected, he will have debts to pay. Let’s face it: Whatever your politics, it’s obvious that Mitt Romney is a politician first and foremost. Do you really think he’s going to stand up to the very people who got him elected? Of course not. He is going to put an anti-choice conservative on the Supreme Court. Roe vs. Wade will be overturned. Because that’s what Romney has to do politically. I don’t know what Romney really believes, but I do know what his base believes — and that is not good for the Jews.

2) The Republican Party Has Fallen to Extremists

The extremists call the shots in the Republican Party these days. Of course, Romney doesn’t talk much about abortion or gay and lesbian rights on the campaign trail; his positions are way, way to the right of most Americans. But he talked about them all the time in the primary, when he described himself as “severely conservative.” Do you think he’s simply forgotten those views? Of course not. It’s a shell game he’s playing. Tell the base one thing, and tell moderate voters another. It’s a bait and switch.

American Jews know better than this. We have been victims of discrimination. We may not always live up to our best values, but we know what they are.

Take the example of equality for gay people — an issue that is close to my heart, as someone both proudly gay and proudly Jewish. Really, I want to ask my moderate and conservative friends: Don’t you know better? You’ve danced at my wedding, you’ve invited me to speak to your synagogues — but in the voting booth, you vote to make it impossible for the man I love and me to build our lives together. How can you look me in the eyes?

Now, I know my moderate friends aren’t focused on these issues. But that is the effect of a Republican vote. Supporting Romney is supporting Georgia Republican Paul Broun, who said evolution and the Big Bang are “lies straight from the pit of hell,” and Missouri Republican Todd Akin, who said that women can’t get pregnant as a result of “legitimate rape.” Will American Jews really vote for a party that would ban all abortion, even in cases of rape and incest? Only by closing their eyes. Or perhaps because of…

Here’s the challenge: Find me one hair of difference between the Obama administration’s policy on Israel and any of the last Republican administrations’. This has been the most pro-Israel four years in American history: Funding the Iron Dome defense system, not opposing Israel’s settlement policy (unlike Bush I), taking a hard line on Iran (unlike Reagan, who condemned Israel’s bombing of the Iraqi nuclear site). Don’t trust me — trust Israel’s generals, who said the same thing.
So what is behind this awful campaign to paint Obama as somehow anti-Israel?

The truth is, it’s not about Israel at all. Republican shills like the so-called “Emergency Committee for Israel” are just ploys designed to elect Republicans by creating a wedge between Democrats and Jews. As The New York Times reported, even Sheldon Adelson’s vaunted pro-Israel politics may just be a facade for his economic interests, including sheltering billions in overseas income from taxation.

In other words, these people are just using Israel for their own motives.

And the way they’re doing it is even more troubling. Conservatives talk about “Barack Hussein Obama,” as if his middle name is evidence of his foreignness, his Arab-ness, his Muslim-ness. Since they don’t have facts, they use innuendo to pander to our fears.

So here’s what I ask of those concerned about Israel and wavering in their support of President Obama: Look for facts, not rhetoric of being “disillusioned,” or generalizations, but actual facts. And if you can’t find them, look inside your own heart. Let’s admit it: All of us carry vestiges of Jewish trauma within us, including fear of anything Arab or Muslim. We are all vulnerable to this kind of manipulation. If something “makes you uneasy,” don’t listen to that unease; second-guess it.

The Jewish moderates I know are basically good people. But make no mistake: Moderates are not at the helm of the Republican Party. The Eric Cantors and Bill Kristols of the world have made a deal with the devil. They may think they’re just using the Christian right to get elected, but really, the Christian right is using them.

Barack Obama may not perfectly represent everything each of us believes on every issue, but the alternative to him is terrifying. Please don’t forget that.