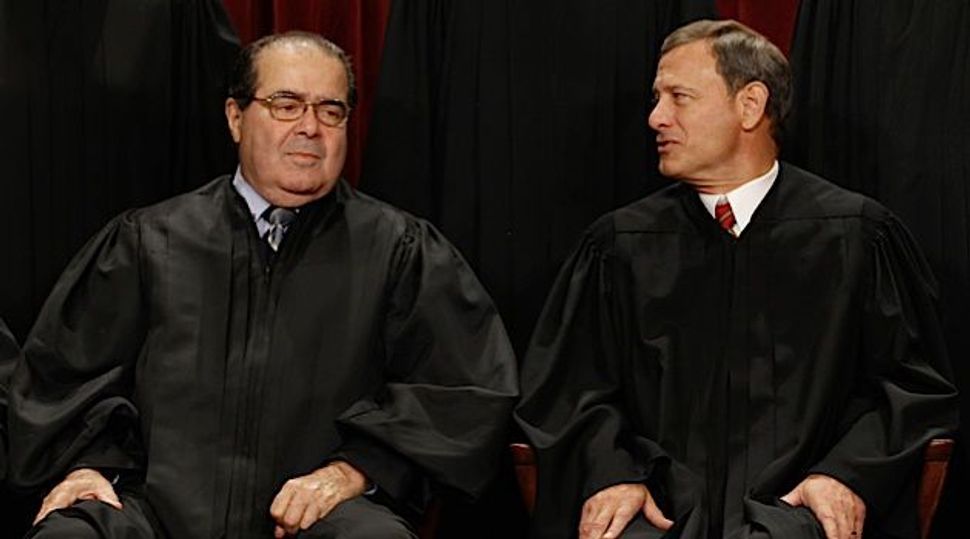 For all the presidential candidates’ talk of jobs, jobs and more jobs, voters face three other decisions that loom much larger. After all, poor economic policies can be changed in four years. The effects of these three decisions will stay with us for a long, long time — in one case for at least a generation, and the other two, arguably, forever.

I’m talking about the Supreme Court, the Israeli-Palestinian conflict and the climate. Or, put differently, the nature of the American social contract, the survival of the Jewish state and future of life on the planet.

Do I have your attention? Good. Let’s take them one at a time.

The Supreme Court. Whoever wins the White House in November will almost certainly get to name at least one justice, and possibly more. This will determine the fate of Roe v. Wade, of course, but the stakes are much higher than that. Ending abortion is part of a larger conservative project aimed at overturning a century of judicial precedent and downsizing the expansive individual rights that defined 20th century America.

The overall project, known as constitutional originalism, seeks to limit government to those functions specifically named in the Constitution, supposedly as the 18th century authors understood them. Short term, it’s about restricting reproductive and other privacy rights, ending affirmative action for racial equity and boosting religion in the public square. In the longer run, it targets a vast array of economic, safety and civil-rights rules rooted in the 20th century reading of the Commerce Clause. The bottom line: less government in the boardroom, more in the bedroom.

Three of the court’s five conservatives, Justices Scalia, Thomas and Alito, are avid originalists. The other two, Justice Kennedy and Chief Justice Roberts, share most of the originalists’ policy goals, but philosophically they’re pragmatists, not ideologues. Kennedy, the court’s swing vote in recent years, sides with the four liberals about one-third of the time. Roberts is more conservative, but he’s known to fear the court will lose credibility if it keeps deciding historic cases like Citizens United and Bush v. Gore by narrow 5-4 majorities. A 6-3 split would make his life simpler.

What are his odds? That depends on who wins November 6. The oldest justice, liberal Ruth Bader Ginsburg, 79, has undergone two cancer surgeries. (Three others, Scalia, Kennedy and liberal Stephen Breyer, are well into their 70s but seem healthy.) If a Democrat names Ginsburg’s successor, the split remains 5-4 conservative. If a Republican wins, Roberts gets his 6-3 court.

Israel and the Palestinians. By all accounts the window for a two-state solution is nearly closed. Unless something dramatic happens very soon, Israelis and Palestinians will find themselves irrevocably joined in a single entity that will be either binational and no longer Jewish or minority-ruled and no longer democratic. Either one spells violent tensions as far as the eye can see.

Conventional wisdom says the sides are too far apart for a deal. That’s not exactly true. Negotiators came close in 1995, 2001 and 2008, but the talks always collapsed just before the finish line. The failures followed a pattern: Israel’s prime minister was removed — by assassination, coalition collapse or criminal charges — and Palestinians erupted in violence, whether bus bombings, intifada or rockets, undermining Israeli public willingness to proceed.

Conditions now look worse than ever: the region in turmoil, Islamic fundamentalism on the rise, Palestinians refusing to negotiate and threatening to run to the United Nations. But that’s not the whole story. Palestinian Authority chief Mahmoud Abbas told visiting Israeli politicians in mid-October, and repeated in an October 19 Yediot Ahronot interview, that he sees the U.N. bid giving him the popular backing to resume talks without preconditions. Egypt’s Islamist President Mohamed Morsi told the U.N. September 26, in Arabic and broadcast across the Arab world, that he remains committed to Egyptian-Israeli peace. He also reaffirmed the Arab Peace Initiative, which offers Israel pan-Arab recognition in return for Palestinian statehood. Israel’s intelligence agencies see a genuine opening.

Successful Israeli-Arab agreements in the past have usually required aggressive shepherding by an American president. Obama tried to do it again in 2010, but it blew up in his face and he backed off. Resistance was too high on both sides, and the political downsides at home too costly.

A reelected Obama might try again. Would a President Romney jump in? Conceivably. He might emerge as a stealth Bush I moderate. But it’s unlikely. He’s shown no taste for Bush-style diplomatic activism. Worse, he’s surrounded himself with Bush II retreads who oppose Israeli compromise. But the essential question isn’t what American voters decide on November 6. It’s what Israeli voters do on January 22.

Barring dramatic action, we’re approaching a series of tipping points that will bring cascading changes, causing permanent, catastrophic damage. Most immediate is the melting of the Arctic ice cap. It shrank this summer to its smallest surface area in thousands of years. Where white ice sheets once reflected the sun’s rays back into space, expanses of dark ocean surface are absorbing heat, creating a global heating element that warms oceans worldwide. Warmer seas mean shifting air and ocean currents, fiercer and more frequent hurricanes in Florida, deadly heat waves in Europe, droughts in Africa. As recently as 2007 scientists predicted Arctic summers would be totally ice-free by 2100. They’re now predicting 2030. At some point, perhaps by mid-century, the ice will fall below a critical mass from which it can’t recover.

Averting the mid-century tipping point requires dramatic fossil fuel cuts within the next decade. President Obama tried to get initial climate legislation through Congress in 2010, but Senate Republicans and coal-state Democrats denied him a veto-proof majority. With time running out, Obama would make it a top priority in the next four years. Romney wouldn’t.