What Readers Think About the Election 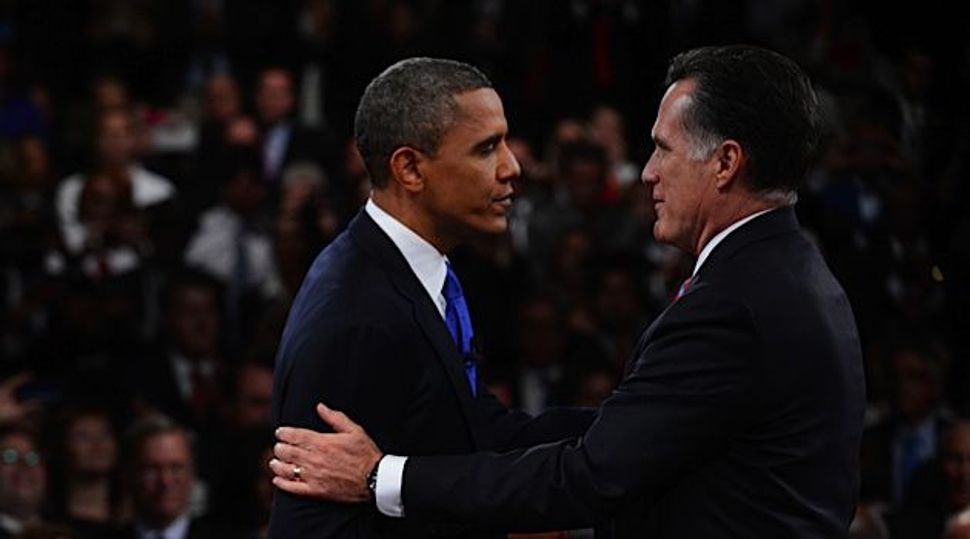 With so much attention on the Jewish vote in this presidential election, the Forward this week asked readers to register their thoughts in three successive polls. We don’t pretend that this web-based exercise is as valid as whatever Gallup or CNN does in the field, nor is our analysis up to Nate Silver’s standards.

But even though ours was not a scientific survey — more a chance to read the minds of readers outside our usual newsroom bubble — the results pretty much confirm the conventional wisdom.

They care most about the economy and health care.

And they say that Jewish issues will affect their voting decisions, but only so much.

The first question went live moments after Obama and Romney left the stage in Boca Raton after their third and final debate, which was meant to concentrate on foreign affairs but strayed into domestic issues, too. We asked readers whether they agreed with each of the candidates’ stands as they were presented that night. Combining the two most enthusiastic options for response (“very much” and “completely”), 36% of readers felt that way about Romney’s views and 61% about Obama’s. Nearly half of those who responded agreed “not at all” or “a little” with Romney, while 30% said so of Obama. (The rest answered “somewhat.”)

The next day we asked readers to rank issues, and there it was clear that domestic topics trumped all. Health care and the economy drew the most passionate responses of “very important”, with Israel a distant third, followed by women’s issues, Iran and the environment. But when all the largely affirmative responses were tallied up, it seems that our readers care at least somewhat about all of them.

Finally, we asked how much Jewish issues will affect readers’ votes in this election. The responses at either end of the spectrum — “not at all” or “completely” — drew very few votes. Instead, it seems that Forward readers say that they consider Jewish issues often and deeply when making electoral decisions, but for most, other issues, too, come into play.

This survey doesn’t predict how Jews will vote on November 6, and it wasn’t meant to do so. But its modest message may be what many of us suspect: Jews care about the issues that all Americans care about, bringing their Jewish values into the voting booth, but not to the exclusion of all else.

What Readers Think About the Election