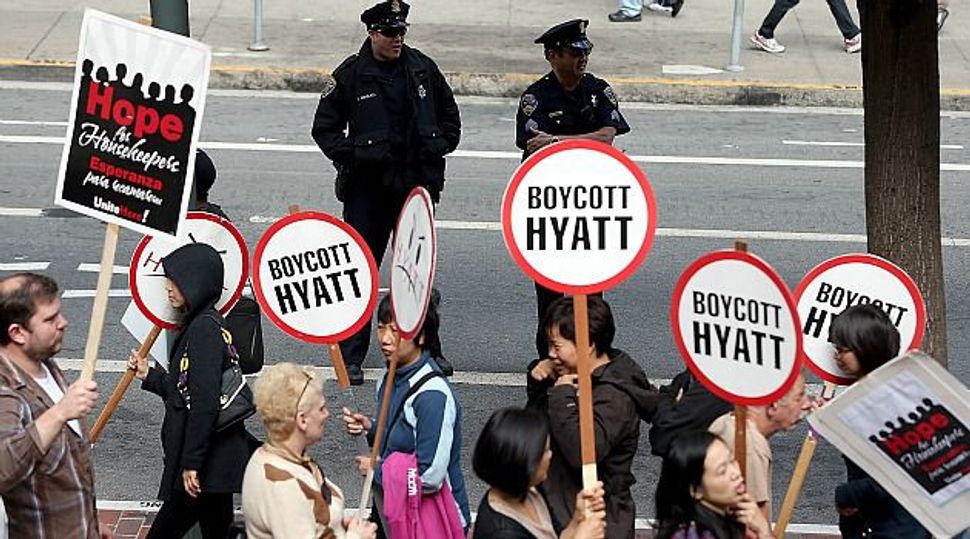 Hotel Debate: Reform Jewry wanted to speak out about the plight of Hyatt hotel workers. But it decided it could not break existing contracts with the company. Image by getty images

When principles and interests collide, it is often difficult to discern which is which. An apposite example, with a thoughtful conclusion, came to pass just days ago, when the Union for Reform Judaism and its public affairs arm, the Religious Action Center, were asked to support a global boycott of all Hyatt hotels and to terminate all signed contracts they might have with Hyatt. (Full disclosure: I served as director of the Reform movement’s Commission on Social Action from 1997 to 2000, and still serve as a senior adviser to the RAC.) The request came from the Unite Here union which represents many hotel workers.

The URJ and the RAC in fact have several contracts at Hyatt hotels over the next two years. But even though many Reform rabbis and lay activists have been at the forefront of efforts to provide greater rights and protections for hotel workers, the request from Unite Here was hardly a no-brainer.

URJ and RAC were founding partners of INMEX, a system established by Unite Here to help not-for-profit organizations avoid entering into contracts with hotels involved in labor disputes. URJ and RAC routinely check INMEX before entering into a hotel contract, and if INMEX shows that a hotel with which it is considering doing business has an existing labor dispute, it will not sign a contract with that hotel — and will let the hotel know why.

But the contracts in question were entered into one to three years before the announcement of the global Hyatt boycott. And the URJ and RAC followed exactly the process Unite Here asked for, checking to see that there were no labor disputes involving the Hyatt hotels in question. There were none, nor are there any today.

Each contract contains standard penalties to be paid by the RAC in the event of cancellation. The total contractual penalties for canceling all their Hyatt conferences would be $450,000. Plus, as the RAC points out, while the act of breaking a contract would provide visible support to Unite Here’s efforts, none of the money would go to the labor union or the workers; it would go to the Hyatt hotels. And the loss of the money would, of course, impede the RAC’s ongoing efforts to promote decent working conditions in hotels, as well as its broader social justice agenda.

The organizations nonetheless considered the request, including a lengthy review by the RAC’s national Commission on Social Action, at its meeting on October 15 in which Tom Snyder, chief of staff of Unite Here, and several Hyatt workers participated. Unite Here argued that, as a chain, Hyatt engages in a number of troubling practices: It requires housekeepers to turn over more rooms daily than the industry average; it is firing full-time workers with benefits and protections to hire temporary agency workers with far weaker protections and benefits; it can punish protesting workers with retaliation or termination. The CSA also heard from high-ranking officials of the Hyatt Corporation who acknowledged problems in a few of their hotels and claimed they’d moved effectively to redress them, and who came with studies and evidence that sharply challenged some of Unite Here’s core claims about the chain’s behavior. (So far, no national religious denomination in America has agreed to Unite Here’s request for a total boycott of Hyatt.)

Boycotts affect many stakeholders who have no involvement in the disputes. As a consequence, the Reform movement has participated in boycotts only rarely and after meeting with stakeholders, considering arguments on all sides and trying to validate the claims made by the various parties.

The upshot? The URJ Oversight Committee concluded that it would not take the actions requested by Unite Here but would “look for ways other than canceling these existing contracts to support hotel workers… [including] educational programs on the situation of workers that will be held at the conferences, showing our support for hotel workers, including those at Hyatt.”