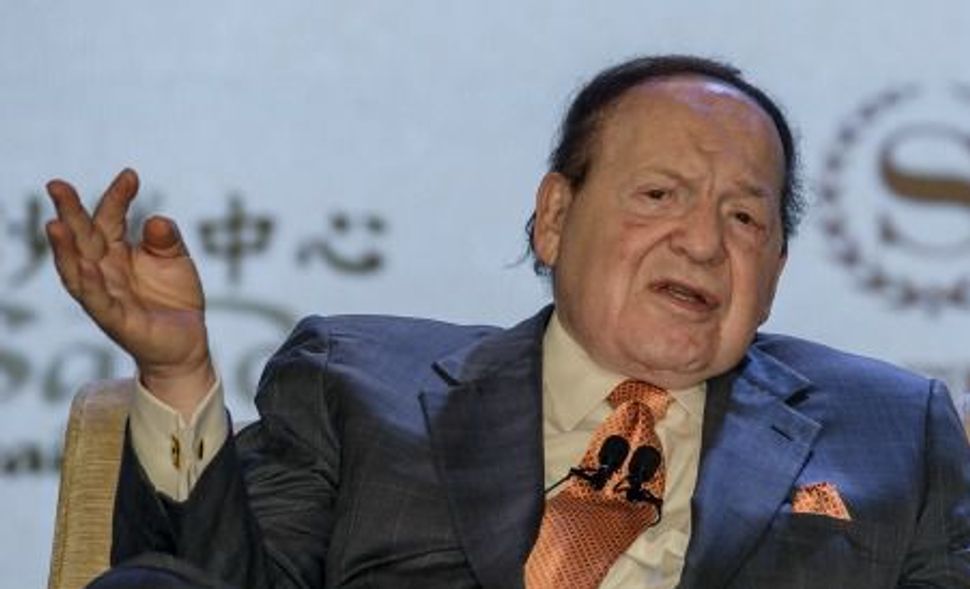 Cash Cow: Sheldon Adelson?s expensive and self-defeating meddling handed the vote to President Obama. On the morning after Election Day, schadenfreude is a Yiddish word. Image by Getty Images

In late July, Sheldon Adelson pledged $6.5 million of his casino empire’s fortune, and potentially as much as $100 million, to a campaign by the Republican Jewish Coalition. It was aimed at peeling away Jewish voters from the incumbent Democratic president, Barack Obama, in potential swing states like Florida, Ohio, and Pennsylvania. Just to underscore the point, the Adelson announcement came as the Republican candidate, Mitt Romney, was traveling to Israel to meet with Prime Minister Benjamin Netanyahu, another one of the magnate’s favored politicians.

Well, we now know that Adelson emphatically succeeded in his goal of affecting the presidential election. The only thing is, he succeeded in re-electing Obama. In the broad sense, the national campaign saw the newly unlimited corporate and personal political spending by SuperPACs mostly harm Republicans by fueling a vicious primary race that bloodied up even its victor. In the very specific case of Adelson, his role as Newt Gingrich’s bankroller may well have cost Republicans the White House.

Admittedly, it is difficult if not impossible to prove a counter-factual. (Just ask President Obama, who had to persuade disappointed voters how much worse the economy would have been without his stimulus bill.) To comprehend how Adelson unintentionally assisted his enemy requires the leap of imagination — “What if?” — of an alt-history novel. Finally, the point here is not about a Jewish conspiracy in the person of Adelson. Rather, the point here is about hubris unhinged.

Just pause for a moment to consider what happened during the Republican primaries. Adelson and his wife Miriam poured an estimated $20 million into a SuperPAC that supported the quixotic campaign of Gingrich. Thrice married, a polarizing figure for 20 years, and a card wild enough to assail Romney about Bain Capital’s predatory style, Gingrich was never, ever going to win the Republican presidential nomination. What he did manage to do, however, once endowed with Adelson’s riches, was deny the nomination to the man who might well have defeated Obama: former Pennsylvania Senator Rick Santorum.

Everything that Mitt Romey so flagrantly lacked, everything that he looked transparently artificial in trying to express, was what Santorum embodied naturally, in his family history, in his bones. He was a conservative Catholic whose consistent record against abortion and gay marriage genuinely energized the GOP’s evangelical Christian base. He was the product of immigrant parents, grew up in the steel and coal region of western Pennsylvania, and had built an organic constituency in the industrial heartland.

In his successful races for Senate in 1994 and 2000, Santorum polled strongly among middle-class voters and in union households; he made actual efforts to compete for votes among African-Americans. When Santorum was routed by Bob Casey in 2006, it was an anomalous race, taking place amid a national backlash against George W. Bush for the ongoing Iraq and Afghanistan wars and featuring an opponent who was an anti-abortion Catholic Democrat.

In other words, Santorum in 2012 was exactly the kind of candidate who could have boosted evangelical turnout in states like Florida and Virginia that Romney narrowly lost. Santorum was exactly the kind of instinctual blue-collar politician with Catholic ethnic roots who, despite opposing the auto-industry bailout, could have spoken with genuine rather than feigned empathy to the Reagan Democrats and swing independents in Ohio, the state that more than any other decided the election.

That is how the course of recent history might have gone, were it not for the accidental kingmaker, Sheldon Adelson.

From the moment in early 2012 when he squeaked out a win in the Iowa caucus, Santorum emerged as the most serious challenger to Romney within the GOP. Texas governor Rick Perry, Minnesota Representative Michele Bachmann, and pizza entrepreneur Herman Cain all sequentially collapsed, clearing the way for a binary Romney-Santorum showdown. But with Adelson’s backing, Gingrich stayed in the race for months, pulling away just enough of the anti-Romney vote in state after state — including Ohio — for Santorum either to lose to Romney or to win by a plurality rather than a majority. Although Santorum had his own friendly SuperPAC funded by the investor Foster Freiss, Adelson and Gingrich essentially spent Santorum into oblivion, handing the nomination to a wounded Romney, who appeared to excite nobody outside of his immediate family.

Having written all this, I should add one footnote. I did not and do not support Rick Santorum. I abhor many of his positions. To say he could have beaten Barack Obama is not a wish but an analysis. Rather, as one Jewish voter who despaired of being pandered to and pressured about Obama’s supposed weakness on Israel, as one Jewish voter resentful of being expected to cast a one-issue vote predicated on a right-wing mutation of true Zionism, I could not help appreciating the spectacle of Sheldon Adelson’s expensive and self-defeating meddling. On the morning after Election Day, schadenfreude is a Yiddish word.

Samuel G. Freedman, an occasional contributor to the Forward, is a journalism professor at Columbia University and the author of books including “Jew vs. Jew” (Random House).