Scarlet ‘A’ Is for ‘Anti-Semitism’ 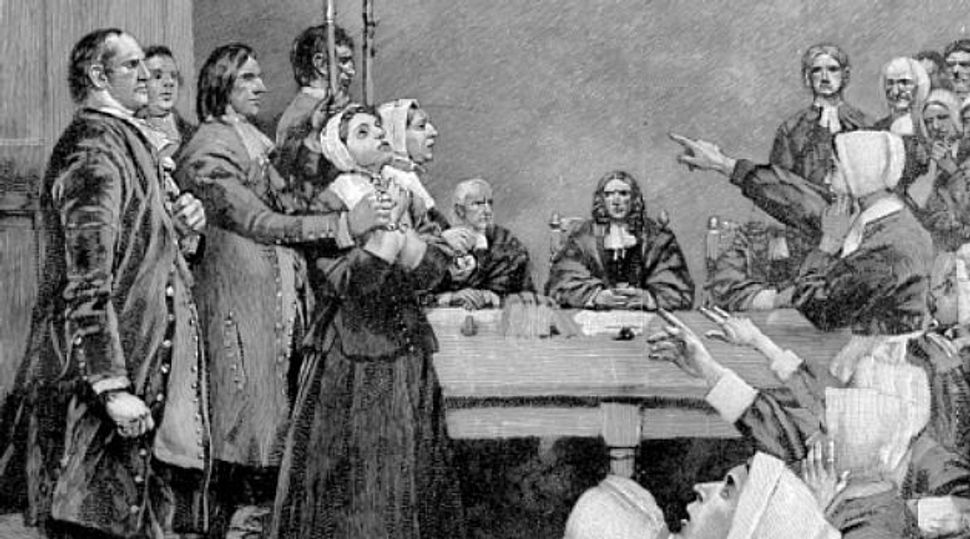 Puritan Ways: Branding heretics and witchhunts were hallmarks of 17th century America. Some Zionists are going down a similar path today. Image by getty images

Like Hester Prynne, the heroine of Nathaniel Hawthorne’s 1850 novel “The Scarlet Letter” about the rigid and harsh religiosity of 17th century Puritans, many contemporary Jewish intellectuals are marked with the infamous letter ‘A’ (not for adultery as in the novel, but for anti-Semitism).

Peter Beinart, Noam Chomsky, Judith Butler, Avi Shlaim, Shlomo Sand and more recently, myself share the dubious privilege of being viewed as anti-Semitic by members of their own ethnic and religious community. What have we done to deserve such ignoble epithet? Nothing more than exercise the right to think and to evaluate critically the accomplishments and failures of the state of Israel.

The people who developed with exceptional brilliance the Talmudic art of debate and argumentation, count today many members and institutions who respond to critique with the rather inarticulate practice of ex-communication (to call a critical Jew anti-Semitic, is nothing but a variation on that old form of zealotry). The accusation of anti-Semitism is especially puzzling when it is aimed against Jews, like me, who have made the deliberate choice of living in Israel.

One simple explanation to these repeated assaults is that anger hides anxiety. According to this view, the French (or American) Jewish community perceives itself in the urgency of its own vulnerability, which in turn commands solidarity against a common enemy – the antisemite. This is particularly true of the French context, in which Muslim anti-Semitism has considerably grown in the last decade. This explanation overlaps with the “dirty laundry” argument: what can be said among members of one’s primary group, cannot be said in the presence of others, and what can be said in Israel cannot be said outside of Israel (my article published in Le Monde is a shortened version of an article published in Haaretz).

Surprisingly perhaps, I accept the validity of these two objections. Indeed, as hermeneutic philosophy has taught us from Heidegger to Gadamer, the interpretation of any claim or text is embedded in a cultural context. Critiques of Jews by Jews have necessarily a different resonance among non-Jews, whose beliefs and attitudes cannot be presumed to be always and only benevolent. Yet, I would argue there are also other reasons, which derive from the paradoxes which plague the position of Jewish communities in their rapport to Israel.

Zionism was created to stop the anomaly of Jewish existence which had been the object of centuries of persecutions in Christian countries (far more than in Islamic countries). Zionism, which was a European nationalist movement, claimed that Jews needed a national homeland in order to “normalize” their existence. In Zionist thought, national sovereignty was not only territorial but also a practice vis-à-vis oneself, in one’s “rapport a soi” as Foucault would have it.

Zionism commanded the new Jew to banish fear and weakness in order to make Jews into political subjects and the collective destiny of the Jews the outcome of an affirmative political will. In becoming an Israeli Jew some 20 years ago, I became the affirmative political subject envisioned by Zionism. The fear of anti-Semitism does not dictate my positions, not because I am not aware of its widespread presence, and not because I am not appalled by it and by all forms of racism, but rather because fear does not shape my emotional and political vocabulary.

As Zionism has intended to do, it ‘normalized me,’ that is, it has enabled me to become similar to my non-Jewish friends, to think of myself as a majority, and thus to care about the minorities who live in my midst. It is from this position of security and sovereignty vis-a-vis my own self that I question the inequality entailed by definitions of citizenship based in and on religion in vigor in Israel. There is thus a flagrant contradiction in being Zionist and in denying in Zionism its normalizing intent.

French (and other) Jews often experience another contradiction: they (rightly and justly) demand a universalist citizenship from France (even the rights to cultural minorities are ultimately and always embedded in universalist demands), yet they accept from Israel that it treats Arabs as third-rate citizens. That cannot be. This is using different standards. A Jew who fights for equality in Europe (for his own or for other groups) must demand it from Israel as well. One Arab judge in the Israeli Supreme Court cannot compensate for the fact that Israeli Arabs — 20% of Israeli population — are excluded from active participation to most military, cultural, and political institutions of Israel; for the fact that the occupation has blunted the moral sensibility of Israelis; and for the fact that Israeli politicians are spectacularly devoid of moral compass.

It is true that Arab citizenship threatens the Jewish character of the country, but this fact should be agonized over by the people who gave birth to the biblical prophets, and not simply accepted as an ineluctable, and therefore tolerable fact. It is true our political institutions are better than those of undemocratic and bloody regimes in the region. But is that the standard by which we want to be judged?

My article was interpreted as a point by point comparison between France and Israel. But it was an attempt to engage in an exercise in historical and political imagination in order to illustrate that something fundamental about universalist morality is becoming increasingly flawed in Israeli polity. My point is simply this: in basing the definition of citizenship on religion, the Israeli-Jewish polity has considerably narrowed the range, the force and the intensity of the morality present in the Israeli public sphere.

Finally, in calling any critic of Israel anti-Semitic, some Jews are acting irresponsibly: they make the fight against real anti-Semitism less effective. Surely, there is a difference between moral critique and racial hatred? Between the will to dominate a group and the desire of justice for all?

As an Israeli I must ask my Jewish brothers and sisters to stop projecting on us their tangled relations with the majority cultures they live in, however painful these relations may be. We Israelis are facing a different set of problems. Zionism was a movement of national self-determination, which conceived of itself as a just political project. It emerged from the ardent desire of Jews to espouse the Enlightenment ideal of living a self-determined life free of fear. But whereas other movements for national emancipation in Europe succeeded, Zionism, which brought European ideas in the Middle East faced far more serious challenges, internal and external. To become again a just and universalist political project, Zionism demands an unprecedented capacity to stretch the boundaries of our political imagination. Rather than exercising a close surveillance of any and all critiques of Israel, members of the Jewish community would better help their cause by facing up to this challenge.

Scarlet ‘A’ Is for ‘Anti-Semitism’