A Palestine That Israelis Can’t See 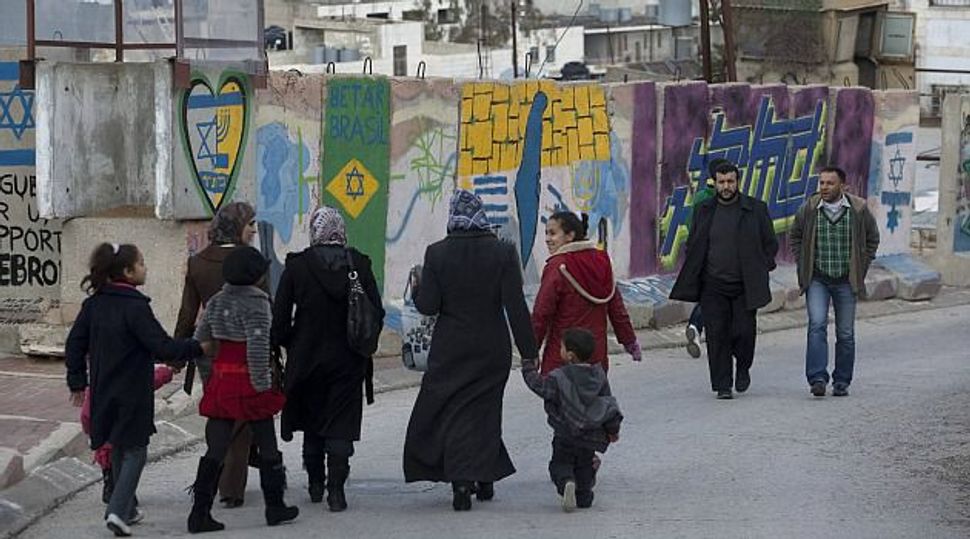 Dead End: It?s a truism to say that the Israeli occupation of the Palestinian territories is unsustainable. So why does it show no sign of ending anytime soon? Image by getty images

The status quo in Palestine and Israel is unsustainable. Anyone involved in the reality on the ground in this part of the world knows this for a fact. As such, one can view the current Palestinian bid to the United Nations General Assembly for non-member state status as a last-ditch effort by the secular Palestinian leadership to save whatever may be remaining of the two-state paradigm as the basis to ending Israel’s 45 years of military occupation.

A significant driver of the current political paralysis is the stereotype, designed and propagated by Israelis, that Palestinians living on the other side of the separation barrier are violent and not deserving of freedom or independence. As such, most Israeli Jews do not see Palestinians as equal human beings, and thus any violent action against them becomes justified, no matter how cruel, illegal or in contradiction of Jewish values.

Nearly all Palestinians on the receiving end of this stereotype miraculously wake up every morning and — beyond doing their utmost to sustain a livelihood under miserable conditions — somehow remain focused on working toward realizing a future free of military occupation.

This stereotype, spread by Israeli authorities to foreign audiences and, sadly, inculcated through Israel’s state education system, is that any substantial relief or complete removal of the 45 years of Israeli military occupation of the West Bank, including East Jerusalem and Gaza, would result in a security risk. A similar fear-mongering strategy is used to dismiss the inalienable right of Palestinian refugees to return to Israel. In the meantime, Israel makes matters worse on the ground by, for example, continuing to build illegal, Jewish-only settlements.

Foreign countries, donors and international organizations have come around, albeit belatedly, to noting in their reports that the status quo is unsustainable. The data is there, in dizzying detail, for all to read.

Additionally, newspapers of record in Israel, France and America have started to editorialize with some hard questions, such as “Can Israel really be a Jewish (only) state?” and “Is a two-state solution still possible?” More recently, even The New York Times questioned the future of Israel’s democratic character when it noted in an editorial: “One of Israel’s greatest strengths is its origins as a democratic state committed to liberal values and human rights. Those basic truths are in danger of being lost.” Human rights aside, there is no doubt that Israel is at a foundational crossroads.

The dominant narrative, especially in the United States — that any change in the status quo would put Israel in existential danger — is one that Israel has sustained for decades, spending hefty amounts on professional public relation firms and masters of spin to disseminate this message. Listening to world leaders and consuming today’s corporate media, the average person would have a hard time reaching a different conclusion.

Israel’s 10-meter high separation barrier and the country’s decades of indoctrination have blocked its view and allowed Israelis to simply stop seeing real live Palestinians — decidedly alive, even if not well, and determined to live normal lives.

They can’t see an army of telecommunication engineers and call center operators struggling to create a commercially viable network with a full suite of services even though the needed, imported equipment is routinely delayed — at times for years — at Israeli ports.

They can’t see an army of youth pocketing the latest 3G-enabled smartphones that are useless because the electromagnetic spectrum required to operate a 3G network is controlled by the Israel military, and therefore use of 3G frequencies — like pasta and crayons in Gaza, not long ago — is prohibited by Israel.

They can’t see the dozen or so business incubators that host innovative entrepreneurs, many of them women, who routinely pitch their ideas to investors and enter their business plans in competition, only to be vulnerable to failure because of the innumerable structural impediments imposed by the Israeli occupation.

They can’t see the 18 banks and half-dozen or so equity capital funds that, day in and day out, seek viable businesses to invest in, only to end up with more funds than this militarily occupied market can absorb. They can’t see the enthusiastic young men and women at the Hereditary Research Lab at Bethlehem University exploring the genetics of hearing loss and breast cancer.

They can’t see hundreds of parents — yes, mothers and fathers — holding their children’s hands as they lead them to watch the performances of the Palestinian Circus School or Al Kamandjâti music school.

They can’t see bank investment committee members toiling with the moral dilemma of financing projects in the besieged Gaza, when nothing in their formal education ever prepared them for the market risk of societal collapse that they must calculate into their decisions every day.

They were blind to the excitement and grassroots campaigning across cities and villages in the occupied Palestinian territory as West Bank residents recently went to the polls, again, for municipal elections.

Most important, they also can’t see something much more serious than any of this — that the Israeli status quo, built on a cruel collective indifference, and the false glow of a rigged prosperity in which the Israeli public is basking can lead to only one outcome: collapse.

Socially, economically and definitely politically, Palestinians will not, and cannot, take any route other than reducing their efforts to build their state and redoubling their efforts toward ridding themselves of the Israeli boot of occupation pressing on their necks. Even if successful in attaining non-member state status in the U.N., the upgraded status will be used as a tool of resistance to terminate this doomed occupation once and for all.

Israelis may be living in utter denial of the peculiar and unsustainable reality they have created by the sheer might of force — but this is no excuse for the rest of the world, especially the United States, not to wake up and realize that ending the occupation has the potential to release a tremendous amount of positive energy in the Palestinian community — a necessary energy for a party to negotiate in good faith as it rebuilds its society from the ruins of decades of destitution.

Ending this military occupation, at long last, will not totally resolve the conflict. Yet in light of current trends putting Israel on a collision course with history, arranging for Palestinians to reach the point where they have real authority over their affairs would be a huge step forward, one that could save many lives on both sides of the Wall.

Sam Bahour is a business development consultant living in Ramallah. He frequently provides independent commentary on Palestine and serves as a policy adviser of Al-Shabaka, the Palestinian Policy Network. He blogs at www.epalestine.com.

A Palestine That Israelis Can’t See