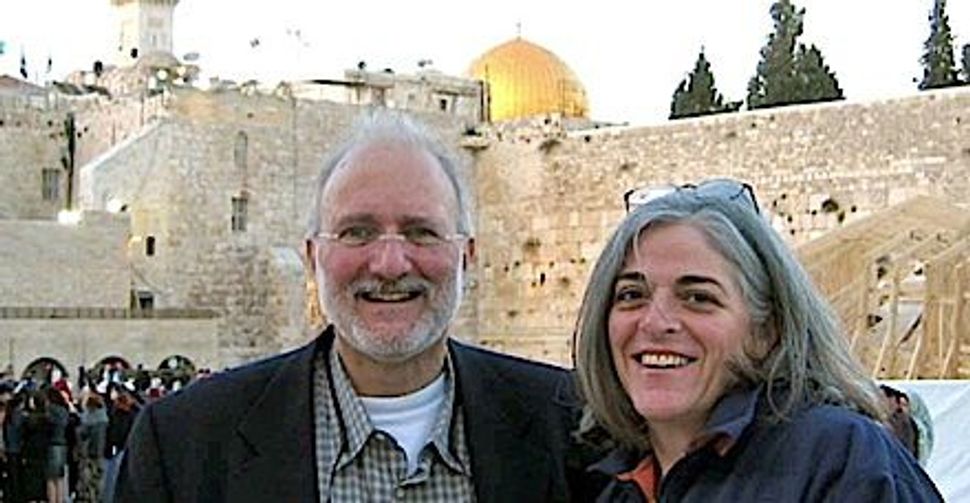 Happier Days: Alan Gross, with his wife, Judy, in Jerusalem in 2005. Image by courtesy of Gross Family

A few weeks ago, more than 500 rabbis signed their names to a letter urging the Cuban government to release Alan Gross. He’s the 63-year-old Jew who has served three years of a 15-year term in a Cuban jail for “crimes against the state” — that is, spying for the United States. He has lost 100 pounds and may be suffering from cancer.

His 90-year-old mother wants to see him before she dies. His story demands compassion, and that’s what the rabbis asked of Cuban President Raul Castro.

“We would urge your government to release Mr. Gross on humanitarian grounds,” said the letter. “Alternatively, if despite his and his family’s suffering over the past three years in prison you remain determined to detain him, we would urge you to allow a doctor of his choosing to evaluate and treat him for whatever medical conditions that he may have.”

Cuba is an anti-democratic state, with an oppressive central government and little personal freedom. Allowing Gross to languish in jail serves no productive purpose; it only emphasizes the implacability of the regime.

But Gross was in Cuba working for a Development Alternatives, Inc., a subcontractor paid by the U.S. Agency for International Development, and therefore the Obama administration also bears responsibility for his plight. As our Paul Berger has reported, Cuba has hinted that it would be willing to negotiate Gross’s release, but the State Department has insisted that Gross was doing nothing wrong in Cuba and that negotiation is out of the question.

Really? Gross traveled to Cuba five times before he was arrested on December 3, 2009. He claimed to have been working on a project to improve Internet access for the island’s tiny Jewish community, but along with the cell phones and other computer equipment he brought into the country were sophisticated, high-tech SIM cards more commonly used by the Defense Department.

It’s unclear how much Gross knew of the complexity and potential danger of his task. He and his wife Judy filed a lawsuit on November 16 against DAI and the U.S. government, saying they didn’t adequately train him or disclose the risks he was undertaking by doing development work.

But the lawsuit quotes from reports Gross sent to his employer that hint at something more dire: “In his fourth trip memorandum, Mr. Gross began his section on risk with the following sentence in bold lettering: ‘In no uncertain terms, this is [very] risky business.’ To illustrate the risks involved, he described an incident during which Cuban customs officials attempted to seize some of his team’s equipment when they arrived at the airport in Havana.”

Who asked Alan Gross to assume those risks? And why doesn’t the U.S. government care about its own citizen in a foreign jail? The Forward’s request for a response from the State Department went unanswered. But there is a logical explanation — a political one.

Gross isn’t just in any jail. He’s imprisoned in the island nation 90 miles off our shores that is the subject of an anachronistic foreign policy deeming it a serious enemy when it’s anything but. The Obama administration has eased restrictions on travel and on the amount of money American citizens could send to Cubans. His administration should do more.

And it can do more. Obama received nearly half of the Cuban- American vote on Nov. 6, amidst signs that the younger generation in that Florida-centric voting bloc doesn’t share the recalcitrance of its elders toward normalizing relations. A growing chorus is arguing that the U.S. should lift the 50-year-old trade embargo to encourage the Cuban government’s tentative steps towards capitalism, even if they don’t lead directly to political reform.

It’s difficult from this distance to judge the veracity of Alan Gross’s legal claims, but it’s clear the the U.S. government bears some responsibility for his travel to Cuba and therefore some responsibility to extract him. Negotiations over his release could, in a larger context, lead to relaxing the anachronistic policies that have perpetuated the Cold War in one small part of the world when it’s over everywhere else.