Life With a Knife to the Neck 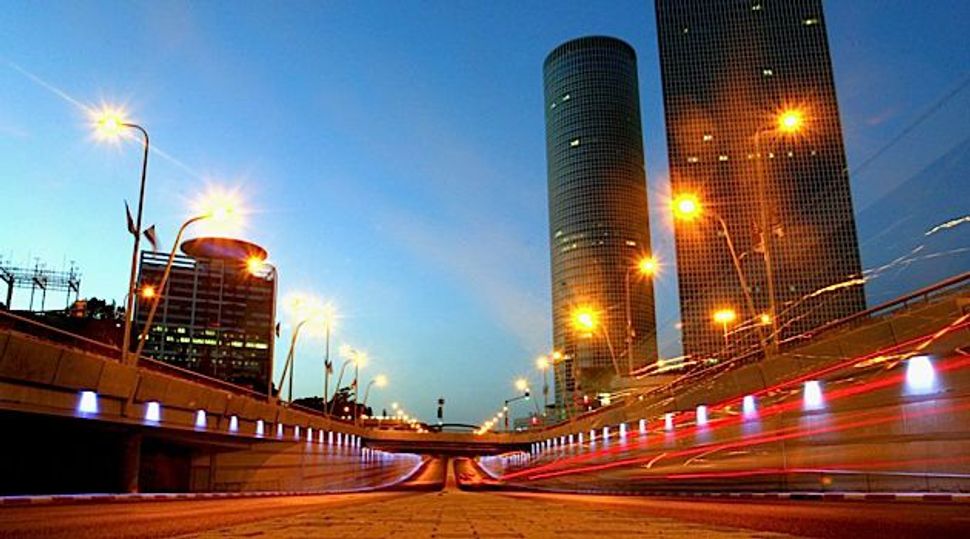 Still Moving: Despite a week of attacks, life in Tel Aviv went on. Image by Getty Images

Imagine every car on a main street suddenly screeching to a stop and all the passengers running out, with only a siren wailing in the background.

When the first siren went off, we thought it was a test. It took us 10 seconds to realize that it was the real thing. We hurried to our safe room, where the washing machine was rattling along, indifferent to the laundry room’s entirely new designation.

When the second siren sounded, I was driving with my daughter, who recently finished her military service as an officer, in a car full of shopping bags. It was midday Friday, always a bustling time in Tel Aviv. We left the car in the middle of the road and took off for shelter. The clock was ticking; we had no choice but to crouch down on the sidewalk and wait for the boom. We were surrounded by quiet, obedient people, except for one little girl who burst into tears. For a moment I thought it was Remembrance Day or Holocaust Memorial Day — the only dates on the Israeli calendar when sirens bring our daily routine to a standstill.

Since the First Gulf War, there have been no sirens in my hometown of Tel Aviv, the city whose legendary mayor, Shlomo “Chich” Lahat, first called it “The City That Never Sleeps.” The city whose slanderers refer to it as “the bubble.” Tel Aviv has shifted to a lower gear, but it has not stopped moving; its frenetic pace has just slowed down a little. I know from experience that the city won’t become a ghost town so easily.

We Tel Avivis are well versed in suffering. Years of exploding buses and suicide bombers ­— including one on November 21 ­— have taught us to live life to the fullest while always glancing over our shoulders. We are a unique urban species, having evolved to possess a “third eye” of sorts — not on our foreheads, like the New Age kind, but on the backs of our necks. In Hebrew, incidentally, the word for “home front,” oref, means “nape.”

Tel Aviv seemed tense on Saturday November 17, but the residents were out and about. In my neighborhood, people rode bicycles and took their morning runs in Yarkon Park. The cafes weren’t empty, weren’t overflowing. I thought I might be able to finally get a table at Benedict, a well-known restaurant where breakfast is served all day and where there’s always a line out the door. On Ibn Gabirol Street, people sat on benches, looking up at the sky — not to spot mushroom clouds, but to catch some rays of sun after an unusually rainy week.

When I drove along the promenade, the beach was crowded. Later I would see the bathers on TV, sprinting out of the water when the third siren went off. They all looked up to watch the Iron Dome intercept a barrage of rockets from Gaza. If not for this ingenious system, developed by anonymous engineers at the military technology company Rafael, Tel Aviv might have responded differently.

As I write, another siren goes off — the fourth. My house cleaner, who came to Israel a few years ago from Bucharest, joins me in the safe room. The washer is running again. Zizi reveals no signs of panic, and I compliment her: “You’re a real Tel Avivi.”

Nava Semel is an author and playwright. She was born in Tel Aviv, where she resides. Her novel, “Paper Bride,” was recently published by Hybrid. The novel takes place in 1930s Palestine, during the Arab uprising and the early days of terrorism.

A longer version of this piece can be found here

Life With a Knife to the Neck