When It Gets Hot, Go to the Beach 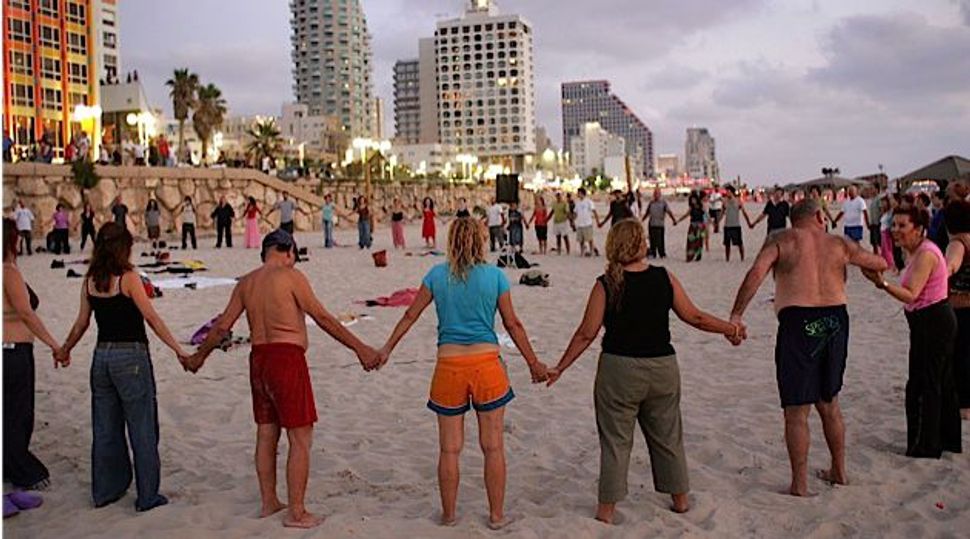 Togetherness: Attacks on Tel Aviv have not broken the city, rather they have brought its citizens together. Image by Getty Images

Did the bubble burst when the rockets started falling on Tel Aviv on November 15? I think it didn’t.

If “the bubble” means pretending to be New York or London — well, they also suffer from terror once in a while. And if it means the possibility to disengage yourself from the news and do whatever you choose to — then that possibility is still here. The bars and clubs are open, the cafes full of espresso drinkers, the streets brimming with bicycle riders and the beaches with swimmers, since, even in November, it is still 80 degrees.

Okay, there are 90-second intervals once in a while — when a rocket is on its way, we hear a siren and then need to take shelter for 90 seconds, until it either falls or is intercepted midair — but they don’t seem to hamper the excitement and togetherness of Tel Avivis. If anything, they have an opposite effect.

There is something about the sirens that feels almost like a party: Everyone is called outside, people are required to get together in shelters, connections are forged. Apart from that, there is the tension of the 90-second wait — a kind of adrenalin rush I suspect Russian roulette players or skydivers feel — and then the release when the time is up and you seem to have stayed alive, which makes people even more excited and friendly.

Unlike in the days of suicide bombings, the attacks bring a togetherness. Everyone is included, merely by hearing the siren and acting on it. And there is another dimension to this collectiveness: On Facebook and Twitter, the anger, black humor and complaints are shared quickly and widely. It is scary — seeing the amount of hatred, blindness and hopelessness of so many of your people — but also reassuring, because you warm up to the feeling of community that the people on “your side” create with their wisdom and humor.

Granted, this is no fun — not for Tel Avivis, who experience undeniable moments of fear; not for the residents of the south of Israel, who suffer a relentless and unbearable rocket attack, and definitely not for Gazans, who are counting their dead and wounded and suffer heavy wreckage. But I guess the mind plays a game on you — pushing dread to the back and pulling up the best it can, under the circumstances. Which is, I guess, the embodiment of “the bubble.”

Assaf Gavron is the author of “Almost Dead,” (2010) a dark comic novel about the era of suicide bombings in Israel.

When It Gets Hot, Go to the Beach