Behind the French ‘Oui’ for Abbas 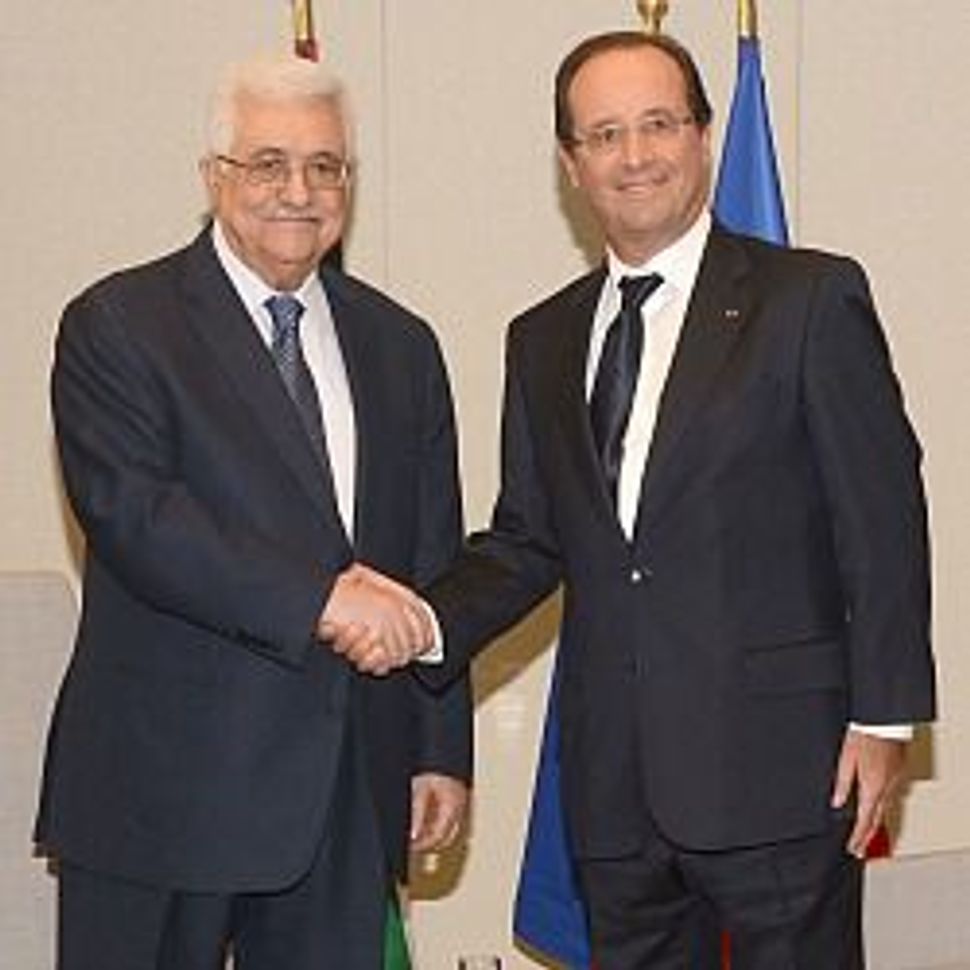 The announcement, made by Laurent Fabius, France’s foreign minister, that his government will support the Palestinian Authority’s bid for “non-member observer status” at the United Nations next week is hardly news, but nevertheless newsworthy.

The news, of course, has been in the offing for quite some time. France’s Socialist Party, which has historically enjoyed closer ties with Israel than have the nation’s Gaullist and conservative parties, has long been an advocate for Palestinian statehood. In 1982, shortly after becoming president, François Mitterrand spoke to this very issue in a speech he gave before the Knesset. When he began his own run for the presidency last year, Mitterrand’s disciple François Hollande announced sixty campaign promises: the next to last was that he would support international recognition of a Palestinian state.

There was little surprise, as a result, when Fabius, during an exchange in the National Assembly, affirmed that France, one of the five permanent members of the Security Council, would “with coherence and lucidity” vote “oui” at the U.N. This desire for coherence applies not just to past commitments made by Hollande and the Socialists, but also public opinion: according to a recent poll published in the newspaper Le Figaro, nearly 80% of the French believe that Palestinians should have their own nation. As for lucidity, the bloodshed in Gaza, which tragically has burnished Hamas’ image while tarnishing Fatah’s, deeply concerns the Quai d’Orsay (France’s equivalent of our own Foggy Bottom). Mahmoud Abbas is the best hope for peace, they believe, but they fear this frail hope will collapse under the weight of recent events.

At first glance, Hollande’s decision to support Abbas’ effort at the UN thus seems little more than a lifeline to the Palestinian leader. But it is also a lifeline thrown to his very own party. Since his coalition government took office six months ago, public approval ratings have plummeted to historic lows. In part, this has been the result of a series of political missteps by Hollande’s prime minister, Jean-Marc Ayrault, as well as infighting between the Socialist and Green Party ministers. More importantly, Hollande’s plunge in popularity has to do with France’s dismal economic situation. Constrained by EU monetary and budgetary constraints, as well as by France’s own admirable but increasingly costly health and social security system, the Socialists seem mostly powerless in the face of endemic unemployment and a decaying industrial base.

Hollande’s embrace of foreign affairs is thus, in part, a flight from domestic affairs. His decision earlier this month to grant official recognition to the Syrian opposition (reinforced by the decision, also announced this week by Fabius, to give more than $1.5 million in emergency aid to the group), can also be seen in this light. Ironically, these Socialist policies betray a deeply Gaullist reflex. For the General, France could only remain France by assuming what he called “grands travaux”, or great projects. Perhaps his greatest project was resurrecting postwar France as a independent and powerful force in international affairs. (It was by dint of his personality, and precious little else, that de Gaulle managed to insert a recently defeated and devastated France as one of the five permanent members of the Security Council.)

Unable to carry out these grands travaux at home, the Socialists are looking abroad and have become Gaullists despite themselves. If it helps leads to a better tomorrow in the Middle East, it is an irony we can easily live with.

Behind the French ‘Oui’ for Abbas