FEMA on the Bimah? 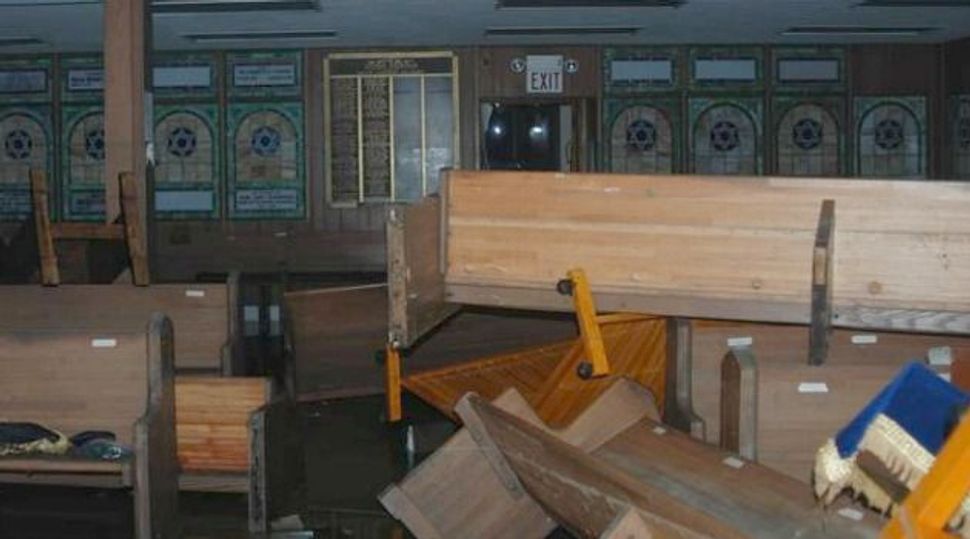 Image by courtesy of temple israel

Only the heartless wouldn’t sympathize with the plight of these synagogues. The flood waters of Hurricane Sandy soared 10 feet high in the building that houses Temple Israel in Long Beach, N.Y., destroying its library, a kitchen and classrooms. A month later, the Modern Orthodox synagogue still had no power or heat, forcing its rabbi to work from his home and car. Estimated cost of repairs: $5 million.

West End Temple, a Reform congregation in Neponsit, N.Y., is facing more than a million dollars in damages from the storm. Even small congregations like the one-room Chabad of Manhattan Beach are facing serious challenges, as entire walls had to be removed because of seeping mold.

As our Seth Berkman reports, all these congregations are applying for funds from the Federal Emergency Management Agency, hoping that the federal government will pay for repairs once flood insurance is exhausted. Only one problem: FEMA regulations do not allow houses of worship to apply for such relief. The congregations are appealing for the funds in the hopes that an ongoing lobbying effort, led by the Orthodox Union, will persuade FEMA to relax its rules.

A compassionate government ought to do this, don’t you think? How can it not? It is difficult, if not heartless, to argue that constitutional prohibitions against taxpayer monies going directly to religious institutions ought to apply in this case. Helping fellow citizens recover from a natural disaster like this historic storm ought to trump other concerns, so the argument goes.

But such compassion comes at a civic cost, even an abstract one. If these synagogues are allowed to receive FEMA funding, it would represent yet another example of federal money going to religious institutions — part of a gradual, subtle trend in the last decade or so. Some view this as a welcome recalibration after years of strict separationist interpretation by a liberal Supreme Court.

Others place this trend in a more worrying context, saying that such “neutrality” can actually endanger the distinctiveness so prized by religious institutions. If houses of worship are treated like other nonprofits, will that help religious life in America, or ultimately hurt it?

This is not a new debate. It goes all the way back to when James Madison led the fight against a proposed tax assessment in Virginia that would have, among other things, paid for the creation and maintenance of houses of worship. That was in 1785. The proposal lost. As Ira Lupu and Robert Tuttle wrote in a legal analysis in 2003, “the Supreme Court has frequently looked to this historical episode as a guide to the original meaning of the Establishment Clause, which became part of the federal constitution in 1791.”

Then in the 1971 case Tilton v. Richardson, the court essentially prohibited government construction or repair of buildings used for religious worship or instruction. That case, along with a pair of subsequent decisions, has so far been the last word from the court on this issue.

But Congress and the executive branch have nudged federal officials to be more generous with public funds. So houses of worship may now apply for grants for historic preservation and homeland security — a program that, as the Forward has reported, was essentially crafted to aid Jewish institutions. Another chink in the proverbial wall of separation was carved in 2002, when the Seattle Hebrew Academy was allowed to use federal money to repair a building damaged by an earthquake.

The theory is that the public funding is justified because it’s going to deal with events or obligations outside the institutions’ control — damage caused by flood or earthquake, for example, or the need to protect from potential terrorism. The easy analogy is fire: Should the local fire department not respond to the call from a church when its bell tower erupts in flames, just because it’s a religious nonprofit and doesn’t pay taxes?

Of course the fire department should respond. That’s what a compassionate government does — protects not just the church, but its neighbors. The concept of “neutrality” obligates government to treat houses of worship like other buildings, just as FEMA grants are not skewed to religious organizations but to anyone suffering from the ravages of natural disasters. (This is why the homeland security grants are so problematic, because they are essentially Jewish earmarks.)

But that church or synagogue is not like its neighbors in many respects. Religious institutions hold special privileges even among groups that are qualified as nonprofits and not required to pay taxes.

They do not have to abide by certain civil rights laws and can, for example, discriminate in hiring, so that the Orthodox shul can’t be subject to a lawsuit if it doesn’t hire the lesbian rabbi. These institutions do not have to disclose the salaries of their top officials or other information about their financial operations, and are allowed to bypass the public transparency required of other tax-exempt groups.

These protections aren’t just niceties. They acknowledge the special role religion plays in our society, and prevent government from becoming excessively entangled in the practices of these faith institutions, precisely what the First Amendment is supposed to guarantee.

Like any privilege in this society, however, this specialness can be abused — and it has been, by clergy who earn fantastic sums of money without any obligation of disclosure, for instance. Or, in a more generous light, these protections allow faith institutions to ignore certain norms and expectations of society — by openly discriminating according to gender, race or sexuality, for another example.

Tax-exempt organizations are so designated because they fulfill a secular purpose for the good of us all. The doctrine of neutrality obligates faith institutions to use public money for secular purposes, too: to restore the street facade of a synagogue but not its sanctuary; to fix the ordinary, not the sacred. But where to draw the line?

That question has bedeviled the federal government’s faith-based initiative ever since it was created in the early days of the George W. Bush administration. And if the Obama administration extends the purview of FEMA to include houses of worship, the difficulty of drawing the line will be there, too. How do you avoid using public money for a pervasively religious purpose when helping a synagogue that exists for a pervasively religious purpose?

And if the trend continues and expands, allowing churches, synagogues, mosques and temples to apply for more and more federal funding, will their position of distinctiveness be diminished? Will they be entangled with more paperwork, more government oversight and more pressure to conform to the norms and practices of other nonprofits?

Our hearts go out to the suffering congregations, and it’s impossible to say they shouldn’t receive the kind of help only government is able to provide. But context matters. History matters. These FEMA grants could be a one-time, extraordinary measure, or could be another step in a fraught process that moves the boundary between religion and state to an unwelcome place.

FEMA on the Bimah?