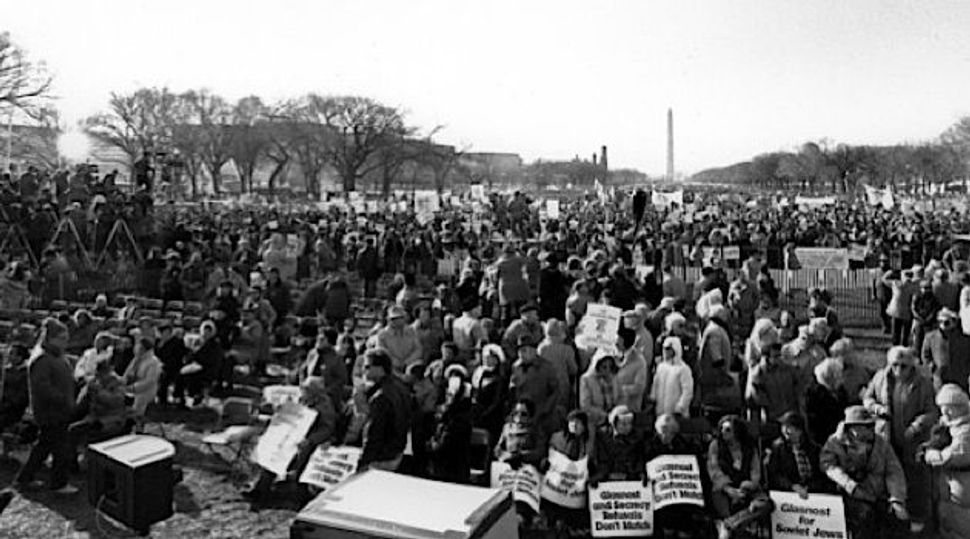 The massive Soviet Jewry rally that took place in Washington 25 years ago on December 6 was a powerful event. The gathering of so many people who traveled great distances, raising a voice of Jewish conscience, of moral conscience, was unprecedented. The rally’s success remains a tribute to Natan Sharansky, one of the great heroes of the Soviet Jewry movement. When he first conceived of the idea, I, for one, was skeptical: I did not think thousands would come.

What I didn’t know was that Sharansky himself would travel from community to community, urging people to join. The rally reflected his tremendous moral leadership. It could not have happened, it would not have happened, without his vision, his drive and his belief that the amcha, the people, would stand up and be counted. The rally also is testament to the Jewish establishment that pulled off a logistical feat, making the event a great success.

While many gathered together on that brisk Sunday in Washington, it was hardly a time of Jewish unity for Soviet Jewry. In December 1987, Soviet Jewry organizations were actually split on the issue of glasnost, the term used to describe Soviet Leader Mikhail Gorbachev’s program of increasing government transparency in the Soviet Union. The Jewish establishment believed that Gorbachev was being honest; many of the activists did not.

For this reason, on the Sabbath before the rally, the activists convened a Sabbath vigil in front of the Washington offices of the Soviet airlines, Aeroflot. The legendary Sister Rose Thering, of blessed memory, played a critical role, carrying the Torah through the Washington streets so that we could read it at the outdoor services. Important grassroots Soviet Jewry activists from around the country were there, as well. Some were wearing memorable T-shirts, on the back of which were splashed the words “glasnost shmasnost,” poking fun at the so called openness of the Soviet government.

The establishment and activists were also split on the future of the Jackson-Vanik Amendment, the legislation that tied freedom of emigration to the Soviet’s trade relationship with the United States. Despite glasnost, many activists felt that it could not be done away with. This position was barely reflected in the large rally. For this reason, two days later, activists were arrested protesting in front of the Soviet Embassy in Washington, demanding that Jackson-Vanik remain intact until Soviet Jewry was free.

As our community commemorates the Washington rally, it ought to be remembered that it was not that event that defined the movement. Soviet Jewry was about a visceral, almost gut reaction of common folks around the world who, in small demonstrations everywhere, raised a grassroots voice of Jewish conscience. It was 10 people here, 100 there, who became a family of protesters, relentlessly, powerfully, endlessly, over and over, speaking out.

The Washington rally lacked this earthiness; it was a much more professional gathering. Excluded was the presence of Rabbi Shlomo Carlebach, the sweet singer of the Soviet Jewry Movement who composed the Soviet Jewry theme song, “Am Yisrael Chai.” On several occasions, Carlebach mentioned this painful slight to me. Absent was the simple bullhorn, or megaphone, or master of ceremonies standing before a borrowed microphone, calling people forward. It was replaced by a professional voice of a man who could not be seen, announcing, Hollywood style, who the next speaker would be. Not heard at all was any representative from the SSSJ. Of all the national Soviet Jewry organizations, we alone were not permitted to speak. Our message of remaining tough on the Soviets was hardly heard. Although Vice President George H.W. Bush spoke at the event, we, the activists believed that strong words had to be directed at President Reagan, demanding that he continue the pressure.

With all its positives, the rally fell short in significant ways. It had the ring of a celebration to mark what many felt was the imminent emigration of hundreds of thousands of Jews. The best indicator of this was that there was virtually no follow-through in the days and weeks and months after the event. Not surprisingly, for the first time in many years, the New York Solidarity rally — an event that annually attracted tens of thousands — was canceled a few months later. This despite the fact that another Reagan-Gorbachev summit was soon to take place. It was as if the movement were being officially retired. Activist and former Refusenik Yosef Begun expressed deep disappointment when he said, “We have no right to weaken our struggle and pressure on the Soviet Union.”

A rally the size of the Washington event should have triggered a massive outpouring of support. This did not happen. Rather than catapult the community to act en masse, a lull set in. This occurred at a very dangerous time for Soviet Jewry. It’s precisely when victory seems at hand that one is most vulnerable. And the activists knew this and kept the pressure on for a good three to four more years, pressure that was critically necessary to finally free Soviet Jewry.

It’s 25 years later. Younger activists have grown older. Looking back, I see what I could not see then. I’ve come to recognize the tremendous commitment and organizational skills of the establishment. But if we are to teach what the Soviet Jewry movement was truly about, we must keep the record straight.

Let the commemoration of this rally trigger a deeper study of the movement, a movement that was made up of millions of humble heroes — young and old, across denominations, across oceans and across faiths — who were inspired to speak out loudly and clearly, declaring “Let my people go! Am Yisrael chai!”

Avi Weiss is founder of Yeshivat Chovevei Torah and Yeshivat Maharat, senior rabbi of the Hebrew Institute of Riverdale and the author of “Spiritual Activism” (Jewish Lights, 2008).