What the E1 Move Says About Bibi 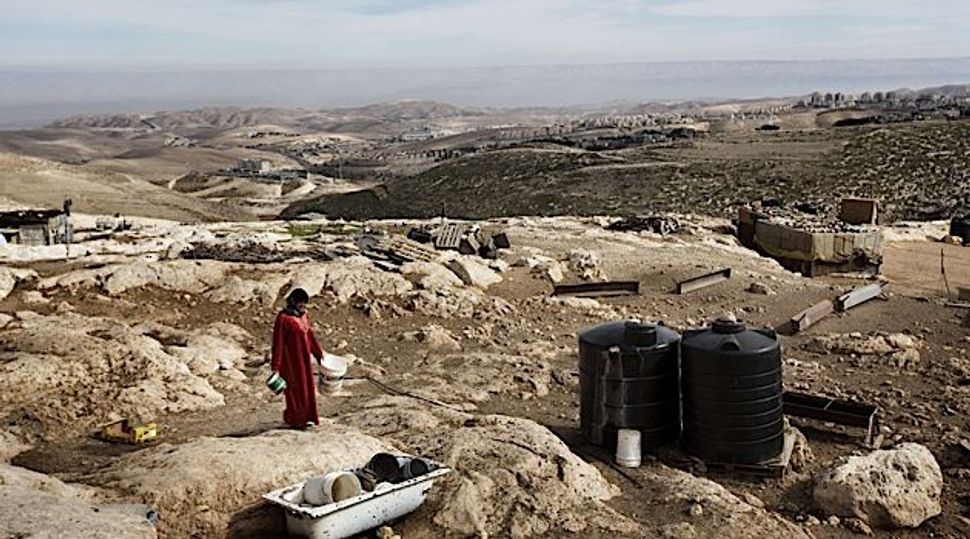 Contested Land: Bibi is planning to build on land that could the Palestinians say they need for a state. Image by Getty Images

A 3000-acre hilly expanse of parkland that is, improbably, part of East Jerusalem has long tantalized Israeli expansionists. Construction and development in the area, known as E1, would isolate Bethlehem and Ramallah, sealing them off from the remaining Palestinian neighborhoods of East Jerusalem. This would at least threaten, if not destroy, any prospect of a two-state solution to the Israel/Palestine conflict. Yet in the immediate aftermath of the United Nations General Assembly vote upgrading the status of the Palestinians, the Israeli government announced that Israel is moving forward on preliminary zoning and planning preparations for building housing in E1.

Its appeal to expansionists? Hear the word of Dani Dayan, leader of Israel’s settler movement, as reported in Haaretz on November 30: It is “a very important Israeli interest to develop E1.” The two-state solution, according to Dayan, is “an existential threat to Israel.” E1 development, he went on to say, is “beneficial for peace because a two-state solution is a prologue for another bloody confrontation.”

Evidently, the government of Israel agrees with Dayan, offering further evidence — as if further evidence were required — of Prime Minister Benjamin Netanyahu’s utter contempt for any two state solution that allows for a viable Palestinian state.

This creates, one hopes, a bit of a quandary for the United States, which has in the past fiercely objected — but only rhetorically — to Israel’s designs on E1. What then shall America do? What it will doubtless say is well known, but are words becoming inadequate? America’s commitment to Israel’s security, we say, is iron-clad, rock-solid and so forth. But if E1 development wrecks the prospect of a two-state solution, is Israel’s security advanced or subverted? If your neighbor, your dear friend, your ally, is about to step into an open manhole, do you shout out a warning, then run to intercept him before he plunges downward? If you do not, what sort of ally are you?

From Leviticus 19:17: “You shall surely reprove your fellow,” else you shall bear guilt because of him.

One is bound to ask: Would the Netanyahu government have spat in the face of the United States if America had opened up this smidgen of difference between itself and Israel? After all, France, Italy, Spain and Switzerland all voted yes; Britain and Germany abstained. And the sky did not fall in.

Prior to the U.N. vote, the Israeli government was misleading about what its reaction would be to the anticipated victory for the Palestinians. The New York Times reported that Israel had toned down its threats of countermeasures after the vote, “aware that a harsh reaction would only isolate it further.” Israel’s response, according to the government’s official spokesman, will be “proportionate” to how the Palestinians act after the vote. But in fact the Israelis did not wait to see how the Palestinians acted. The announcement of plans for E1 happened less than 24 hours after the General Assembly vote.

Whether or not Israel’s aggressiveness is due to the dramatic turn rightward in the primaries for Netanyahu’s Likud party, it is consistent with Netanyahu’s refusal to take any step towards President Mahmoud Abbas. From Israel’s post-G.A. vote we have learned that all the talk about Israel’s restraint on the matter of raising the Palestinian’s status at the U.N. was just talk, no more. From America’s response, we learn that America defines security too narrowly. A nation’s security is determined by the state of its armed forces – and also by the educational attainments of its people, its economic development, its relationship to its minority populations, its alliances and its standing in the international community. By those criteria, Israel today gets a mixed report card. The milk is curdling, the honey dripping away.

And it remains the case, the lamentable case, that Abbas has no serious partner for peace.

What the E1 Move Says About Bibi