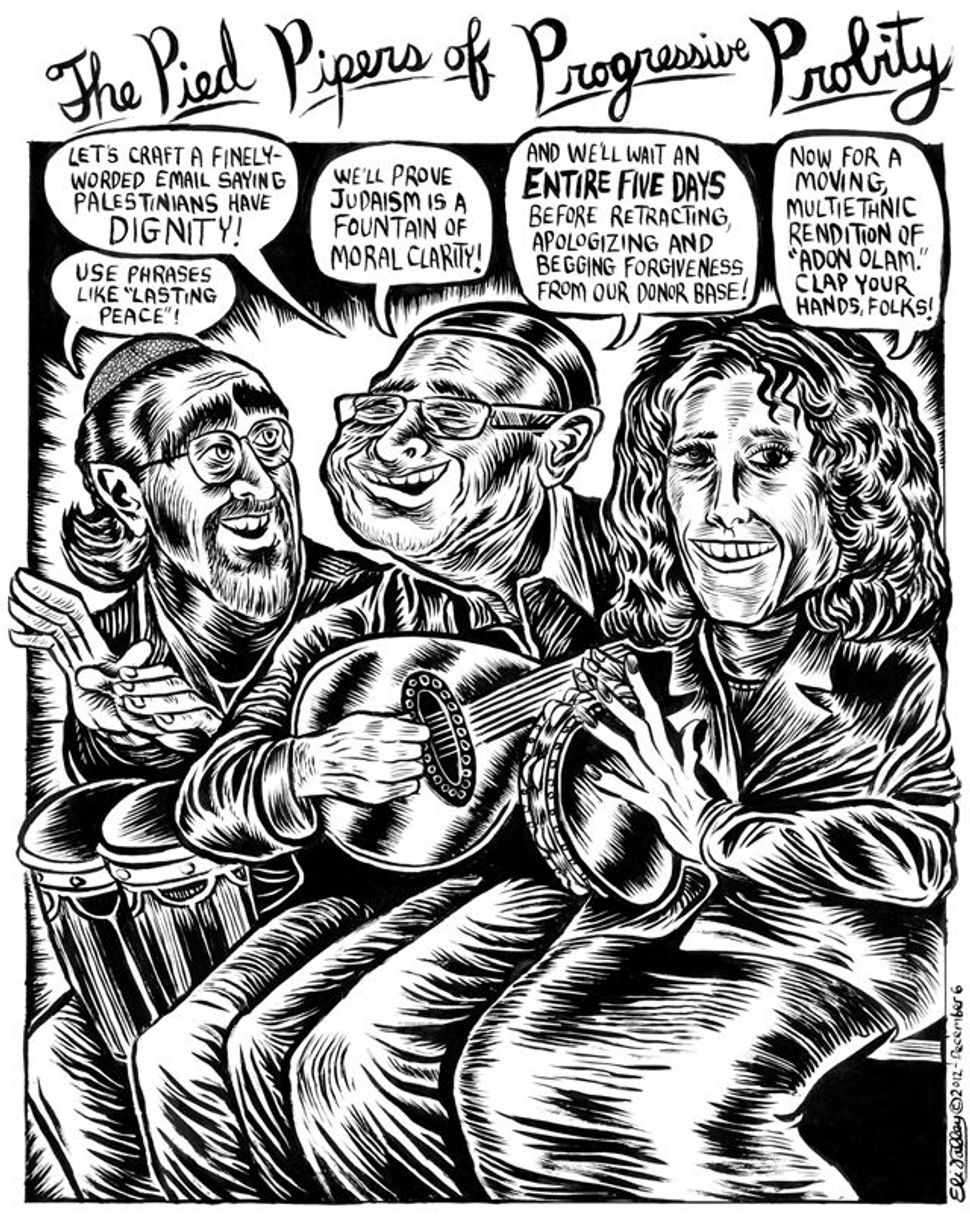 Eli Valley’s satirical drawings often elicit critical comments, but they usually come from the political right, his frequent target of ridicule. His latest comic, published on this blog the past Thursday, has drawn the ire of the political left. A basic journalistic calculation would say that Eli is just doing his job, with no fear or favor to any ideological or political cause, and I agree.

I also feel that basic journalistic fairness requires us to air those criticisms, and respond to them.

Some of the critics strongly objected to Eli’s characterization of the rabbis of B’nai Jeshurun, who stirred up controversy with a letter to the congregants of their progressive Upper West Side synagogue supportive of the Palestinian bid for statehood at the United Nations. After the New York Times ran a story about the controversy on Page One (which I, for one, thought was over-hyped and overblown), and an outcry from some of their members, the rabbis issued a partial retraction.

This is what caught Eli’s scathing eye.

And drew some virulent response from BJ members and supporters.

“I was shocked and dismayed at your paper’s printing of this atrocious mockery of the rabbis of Congregation B’nai Jeshurun for having stated their views re the UN vote about the Palestinians. One may disagree with their view without allowing this kind of disrespect to be printed in what I believed to be a progressive, respectable Jewish newspaper. I believe an apology from you would be more than appropriate,” wrote Claire Hertz.

“You slandered rabbis who love and support the essence of Judaism and the future of Israel, ” wrote Connie Gruber.

The comic “shocked me because of its mindless ridicule of a serious issue, with no content except caricature and done in a style that, in another context, some might have derided as anti-semitic [sic],” wrote Paul Scham.

There will be more letters at the bottom of this blog post. But let me briefly respond:

To those who ask for an apology, I respectfully decline. As the ultimate arbiter of what is published in the Forward in print and online, I see no reason to apologize for Eli’s comic. It was fair comment, published on an opinion blog (and not in the paper) where standards are looser than in the print edition and vigorous debate encouraged. A comic — or to use an older phrase, an editorial cartoon — is by its nature sharp and exaggerated; the artist has a moment to make his or her point, with no time for nuance or mitigation. The Yiddish press is filled with historic examples of cartoons that employed stereotype and exaggeration to ridicule the powers-that-be, including our legendary founding editor, Ab Cahan. Eli’s work carries on that tradition.

Now for more of the letters to the editor:

“I am appalled by the cartoon you published denigrating the BJ rabbis. While I may not like it, I understand your paper’s policy of accepting paid advertisements that disparage rabbis, citing free speech (ex. the National Republican Women’s attack on Rabbi Lynn Gottlieb). However, Jewish values are very clear about slander. I cannot fathom why the Forward, a Jewish paper I respect, would permit such a repugnant attack on three highly respected rabbis in our community. Shame on you.” — Barbara Dobkin

“I was very dismayed to see that you chose to publish a cartoon depicting the BJ rabbis as jokesters. The cartoon undermines what Bnai Jeshurun takes very seriously: prayer, taking the messages and interpretations from Torah and trying to apply them to present day difficult situations, and inclusivity. I expected much more sapience coming form the editors of the Forward.” — Paula Rackoff

“As a member of Bnai Jeshrun, I resent the caricature drawn and the false characterization of the rabbinical leadership of the BJ congregation. Although there is music and sometimes joyous dancing during the welcoming of Shabbat, there is always a solid and solemn joy in the deep work during our worship. In addition, the stand the rabbis took concerning what they saw as some tiny movement towards peace in the Israeli Palestinian conflict was well thought out and courageous. Your comments do not reflect knowledge of our congregation and the high regard members hold for their 3 rabbis.” — Esta Rose

I’ve also heard from members of BJ who agreed with the comic’s point and presentation.

As an editor, I always welcome this kind of debate, no matter how uncomfortable it may seem, because it shows that readers are attentive and that they care. And I invite others to continue the conversation by posting (civil) comments below. But I hope that this doesn’t obscure the larger point raised by this story: How should rabbis express partisan/prophetic views without turning away congregants who don’t agree? Look to our oped page later this week for more on that.