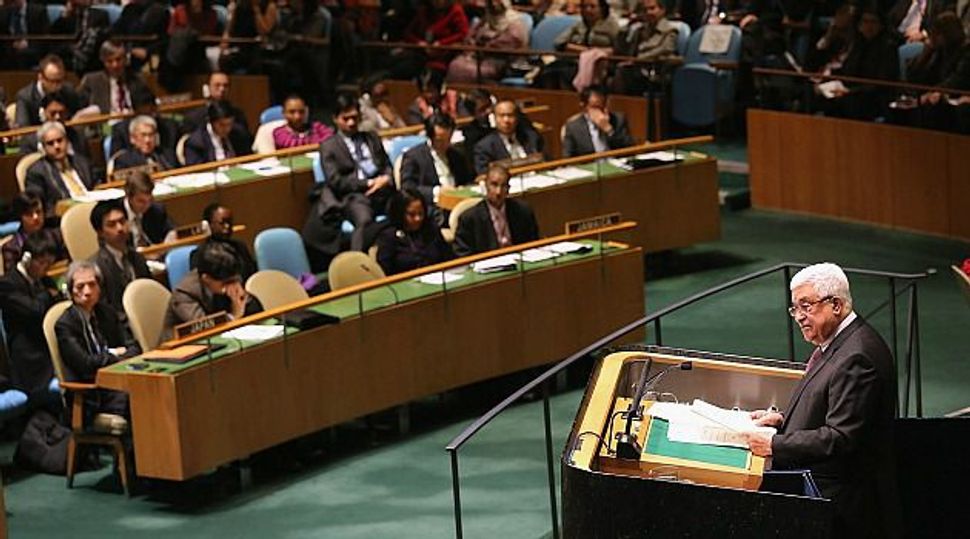 Mr. Abbas?s Drama: Not everyone at B?nai Jeshurun agrees with the rabbis? statement about Palestinian statehood. But that doesn?t mean they are going to abandon the congregation, either. Image by Getty Images

“You’re taking them to BJ after what the rabbis there did?” the text message from my ex-husband read. He was referring to the fact that I’d taken my two boys to Shabbat services that morning at the Upper West Side congregation B’nai Jeshurun.

And he wasn’t the only one expressing disbelief. “If MY rabbis wrote an e-mail like that, I’d stop being a member there,” one of my friends told me over lunch, jabbing her finger in the air as a ‘J’accuse.’ Another friend forwarded me an e-mail he’d sent to the synagogue’s rabbis, which concluded with him telling them that he was only sorry he wasn’t a member and therefore couldn’t resign his membership.

As most everyone knows by now, the rabbis of BJ unleashed a tidal wave of criticism with their e-mailed statement supporting the United Nations vote on the upgrade of Palestine’s status. News of their statement was splashed across the front page of The New York Times, and used as a handy illustration in the latest salvo of loyalty wars — accusations by Jews, against Jews, of being not adequately loyal or too blindly loyal to the State of Israel.

“I am sure that those of us who occasionally attend services at B’nai Jeshurun, as I do, and those who are members and frequent attendees, are deeply divided about these issues,” Alan Dershowitz wrote in the Forward’s pages. “It required incredible chutzpah and insensitivity to the intelligence of congregants for the rabbis and lay-leaders to issue their announcement without first allowing both sides of this issue to be heard and debated.”

That being said, surely the general position of BJ’s rabbis came as not much of a surprise to those in the know. BJ has long worn its left-wing politics proudly, practically binding them as signs upon their hands and letting them serve as symbols between their eyes.

As someone whose politics run more middle of the road, I often find myself alienated by the institutionalized assumption that every congregant is on the right side — that is, the left side! — of any given debate. Statements are routinely made in shul by the rabbis, whether as part of a sermon or as offhanded remarks, that reflect their liberal outlook.

The BJ statement did not reflect my politics, nor do the rabbis’ words in shul serve as a mirror image of my feelings on the issue of Israeli-Palestinian peace or others. But these rabbis do lead what, for me, is the most vibrant, engaging and Judaism-affirming experience I’ve ever had within the walls of a synagogue — and I cannot leave that behind.

Once you have tasted what it is like to truly be moved by a service — to be pushed to tears, to laughter, and to depths of feeling by liturgy that is centuries old — you find that you don’t want to go anywhere else, and that is the case for me at BJ. For me, every other service feels dry and cold by comparison. I go so far as to schlep into the city for Kol Nidre and Yom Kippur, despite the fact that the drive from New Jersey prolongs my fast on each end by about three hours every year.

In order to feel comfortable at BJ, though, I have to check my political leanings at the door. So why don’t rabbis do the same?

Let me be clear — I’m not just talking about BJ. I’ve been a member of various congregations in my life, and each time the rabbis opt to spend sermon time on a political issue, there’s inevitably a backlash. I understand that many rabbis must feel the need to poke their sleeping congregants into engagement — or at least, consciousness — with their sermons. And it works: Whenever rabbis talk politics, people listen, get irritated and discuss the sermons over their meals.

And none of that will be any closer to being achieved if I opt to walk away.

Jordana Horn is the former New York bureau chief for the Jerusalem Post.