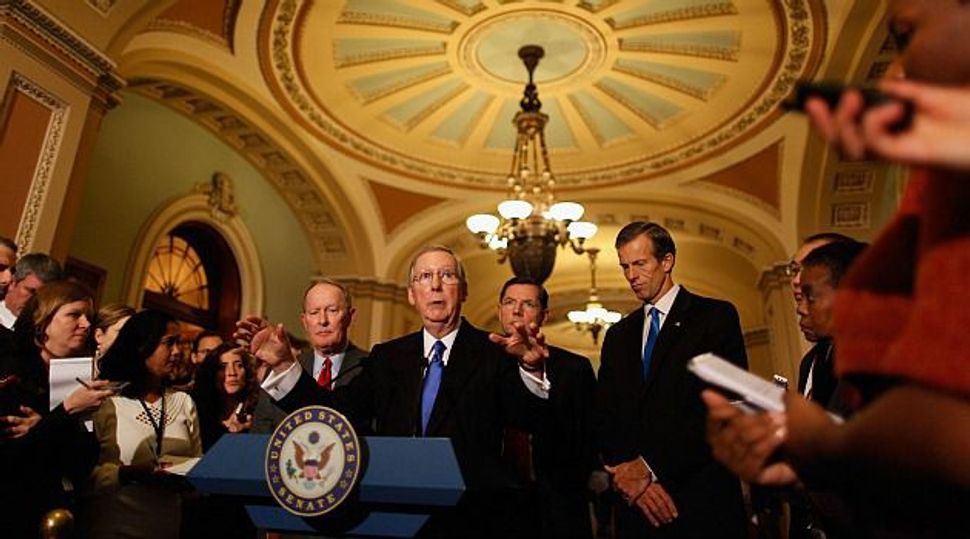 Nothing New: Sen. Mitch McConnell and Republicans in the Senate recently mustered enough votes to block a needed two-thirds vote in favor of approving a U.N. treaty on the rights of the disabled. Image by getty images

Given all the bellyaching these days about the decrepitude of the United States Senate, I’d like to say a word in its defense. There’s never been a shortage of critics pouring bile on that august body, but lately the carping has reached a crescendo. A little perspective is in order.

The current wave of vitriol reached a peak on December 4, when the Senate failed to ratify a United Nations treaty protecting people with disabilities. The vote was 61 (all the Democrats plus eight Republicans) to 38 (all the other Republicans), a majority but shy of the two-thirds required by the Constitution to approve treaties. Considering that one of treaty’s prime initiators was President George W. Bush, and that it was based on his father’s landmark Americans with Disabilities Act, liberals were predictably livid about the defeat. One commentator, writing in the Kansas City Star, called it “a new low” in congressional dithering.

That’s where the critics are wrong. The truth is, there’s nothing new or unusual about our Senate rejecting an international human rights treaty. We reached that particular low a long time ago. In fact, it’s the norm. Of 10 major human rights treaties adopted by the U.N. since World War II, America has ratified just three.

In all three cases — the rights of women, children and the disabled — Senate opposition arose from a mixture of isolationism, Christian fundamentalism and a sort of militant American exceptionalism, along with a surprisingly well-organized home-schooling movement. Opponents have claimed the treaties would let the U.N. intervene in local American communities to force children into public schools, outlaw spanking and force women to have abortions. Business lobbyists were also involved, warning, for example, that the women’s rights treaty would overrule the free market by mandating equal pay.

Beyond those specific fears, a perennial complaint is that the treaties would violate American sovereignty. That was a key factor in Senate dismissal of three other treaties as well, the conventions on the rights of refugees (1951), stateless persons (1954) and migrant workers (1990).

The opposition’s base has always been among senators from what we now call Red States, namely the Old South and the prairie-mountain West. Those are the same regions that opposed relaxing U.S. immigration laws to let in Jewish refugees before and after World War II. The party labels have changed — back then the South was Democratic and the Northeast had a flock of liberal Republicans — but the philosophical and demographic breakdown has endured.

The three treaties that did win U.S. ratification include the conventions against torture and against racial discrimination, as well as the International Covenant on Civil and Political Rights. That last one is a catch-all document that closely resembles the U.S. Bill of Rights (though it includes a ban on capital punishment, which we’ve opted out of).

The history behind the civil-political covenant is telling. It’s one-third of a trio of documents making up the so-called International Bill of Rights. A second, the Covenant on Economic, Social and Cultural Rights, is regarded as the civil-political covenant’s twin; both were approved together in the General Assembly in 1966 and took effect in 1976. The third is the non-binding Universal Declaration on Human Rights. Approved in 1948, it is the source-text for all the other human rights treaties.

The economic and social covenant says that every person has a right to a job at a living wage, a home, health care and to join a union to protect those rights. It’s been ratified by 160 countries, including every developed democracy except the United States.

Here is one of the basics of American exceptionalism: Alone among the world’s democracies, we don’t view food, clothing and shelter — much less medical care or collective bargaining — as human rights.

Obviously, we do a better job than most other countries at providing our citizens with most of the rights these treaties talk about. Our resistance to treaties stems partly from a national sense that we don’t want other countries with less freedom telling us what to do. Part, too, comes from our philosophical traditions on matters like eating, spanking and execution.

The expanding body of U.N. human rights law is a legacy of the world organization’s founding years after World War II. The victorious Allies agreed to create a world forum to negotiate interstate conflicts and try to avoid future world wars, improving on the failed League of Nations. But they split on a second goal, arising from the unique horrors of Nazism. The Western democracies wanted to define and monitor basic laws of human rights, in hopes of preventing a future Hitler. The Soviets were opposed.

As a compromise, the founders launched the U.N. without a human rights arm and set up a committee to define those rights and figure out what to do about them. The panel, led by Eleanor Roosevelt and French-Jewish lawyer Rene Cassin, produced the Universal Declaration of Human Rights, as stirring a document today as it was then. It was adopted by the General Assembly 64 years ago, on December 10, 1948, celebrated worldwide ever since as International Human Rights Day.

Since then the assembly has been rolling out a series of individual treaties for approval by the individual nations, codifying specific aspects of the declaration. At the heart of the system are the two key pillars, the political and economic covenants, considered the core of global human rights law. Except, that is, in America, where freedom of speech and religion are considered basic human rights, but eating is not.

It’s worth recalling, too, that it took us 30 years to ratify the Convention on Prevention and Punishment of Genocide, one of the U.N.’s first efforts, adopted amid the ashes of Auschwitz in 1948. It’s still more aspirational than practical, but it did help the world community to mobilize against mass murders in the Balkans, Sierra Leone and Ivory Coast.

It wouldn’t be correct to conclude that the United States has some particular animus against international human rights law. Why, just this past July the Senate blocked ratification of the new International Convention on the Law of the Sea, which was 20 years in the making and has 163 signatories. We also cast the sole “no” vote in a 2001 decision to begin preparing a treaty limiting small arms and light weapons trade. And, of course, we’ve famously refused to join the Kyoto Protocol on Climate Change (in this we’re joined by Afghanistan, Andorra, South Sudan and Canada) and the International Criminal Court.