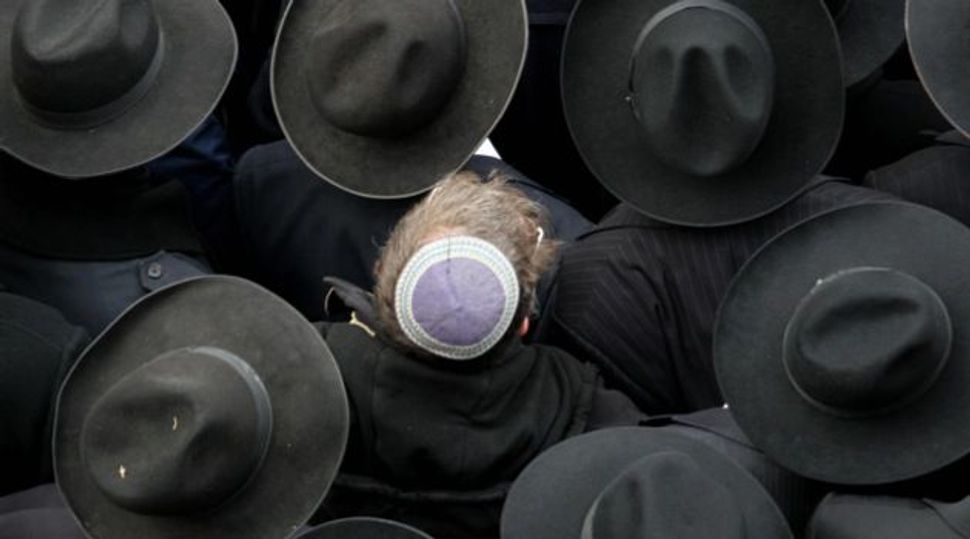 After the verdict in the infamous Nechemya Weberman trial was announced, the Satmar community found itself reeling. This story of an unlicensed therapist who for years was sexually abusing a young girl multiple times a week has inflamed our passions to unprecedented levels, and rightfully so. But now that the dust has settled somewhat, it’s time for some personal introspection.

This was brought home to me, a Hasidic Jew who lives in Borough Park, just as the trial ended when I met someone who confided that his daughter’s best friend was also abused by this very same perpetrator. Stunned, I asked him if anyone else knows about this. “No,” he answered. “And that’s how it should remain.”

Who knows how many other young children are living among us, playing, learning, studying, sitting at the Sabbath table, and yet hiding a deep, dark and terrifying secret in their hearts? Who knows how many shattered lives walk among us? Those who come forward are indisputably courageous and bold. But instead of being embraced by our community as heroes, they are shunned and terrorized. The victims are being treated as though they were at fault. Why?

We need to have an honest conversation. The Weberman trial, for all practical purposes, has brought to light a painful issue with which our community is reluctant to deal. For many of us, it’s just too difficult to digest the truth about this case. As a parent of two young children, one of whom is now in kindergarten, I am personally horrified. I simply cannot fathom how vulnerable my child, or anyone’s child, can be and how devastating it would be if any harm would befall him.

To be fair, our community has so much to be proud of. We are second to none in every category of chesed — kindness — and caring. Our record of achievement in terms of aiding the poor, the ill, the suffering and the lonely is outstanding. We were the envy of the rest of society when our people joined forces en masse to help the victims of Hurricane Sandy. We showed compassion and caring to Jew and non-Jew alike. So why is it that in the area of protecting our children from predators, we have failed so miserably?

Perhaps this is why this case baffles me so.

We have built an infrastructure that successfully weeds out any negative elements that could harm our children, our families and our community. We do everything possible to shelter our young ones from foreign influences. Yet in this one area, we have chosen to look the other way and to neglect our communal responsibility. Instead, we have preferred to remain passive in the face of this obvious aggression, even though it severely affects the sanctity of our precious children. It just doesn’t make sense.

There are those among us who choose to defend the accused simply because their natural inclination cannot accept the fact that these things have happened. There are those who are simply too mortified to accept that this epidemic exists. I understand their feelings; I, too, am horrified beyond words.

The world is watching us, make no mistake about it. As someone who is engaged in the world of public relations and public opinion, I am sensing that the collateral damage of this trial has substantially affected the Orthodox Jewish community. And believe me when I tell you — public opinion matters.

Even Moses understood this. When Hashem chose him to advocate on behalf of klal yisroel, all of Israel, before Pharaoh, his response was that he was ”aral sefosayim” — meaning that he had a speech impediment. Moses recognized the significance of advocating for the Jewish people and knew that their case must be presented carefully and with clarity. Even in biblical times, public opinion mattered.

In modern-day warfare, battles are raged, lives are lost and territories are conquered. But the barometer of victory and defeat is not necessarily measured by the number of casualties or the land gained; it is measured more by the indiscriminate judgment of world opinion. The winner is the one who has gathered more positive comments on websites and social media and has conquered people’s hearts.

Be that as it may, the news media must also bear some responsibility for fanning the flames during the current fiasco. Quick to paint our entire community with a broad brush of defamation, they eagerly pounce on every story of an Orthodox Jew who is being investigated for any reason. The general tendency is to publish a large photo that plainly identifies the individual as a member of our community, coupled with an insulting headline. More often than not, they randomly choose to classify him as a “rabbi” or “community leader.”

The repercussions to our community are very real. I am sensing a distancing from elected officials and others — people who have been sympathetic to our needs in the past. There is a sense among them that no one at the top is addressing this crisis satisfactorily. People have called me aside and asked me off the record why our leaders aren’t dealing with this issue. They can’t understand how circumstances could have allowed a perpetrator to spend so many unsupervised hours alone with his victim. “Is that allowed?” they ask me. “Isn’t this against your rules?”

I fear that they are correct.

I am calling for a Marshall Plan, a total overhaul of the system similar to the one that re-created the infrastructure of the European continent after World War II. It is time for us to rebuild our own infrastructure. It is time to gather together all yeshivas and educational institutions to implement a new series of policies and procedures that can deal with these issues in a practical yet effective manner. Simple changes like windows in every classroom, audio and video surveillance, and licensed counselors and social workers are just some of the improvements that could be made.

All these changes should be administered under the haskama, a letter of approbation, and supervision of our Torah leaders. Procedures should be put in place that would protect both the victim and the accused in the event that false allegations are ever presented. And precisely those among us who are convinced that Weberman is innocent should be paving the way in implementing these changes. If this is not a wake-up call for our community, then what is? It will be costly, for sure. But it can be done. We have the resources to build magnificent buildings for our communal institutions. What good are they if we cannot protect our children from what may be happening in these very same buildings?

It is ironic that precisely our very own community, known for our trailblazing efforts to protect our children, is coming under fire for our meek response to this devastating crisis. We have managed to raise families largely unaware of the vulgarity of the world at large and the threats to our cherished traditions. Yet we can’t seem to take the necessary steps to safeguard our children from the villains in our very own midst.

I sincerely hope that recent events will force us to make the necessary changes. I pray that the outcry will finally come forth. But so far, the silence is deafening.

Ezra Friedlander is CEO of The Friedlander Group, a public affairs and government relations company based in New York City and in Washington.