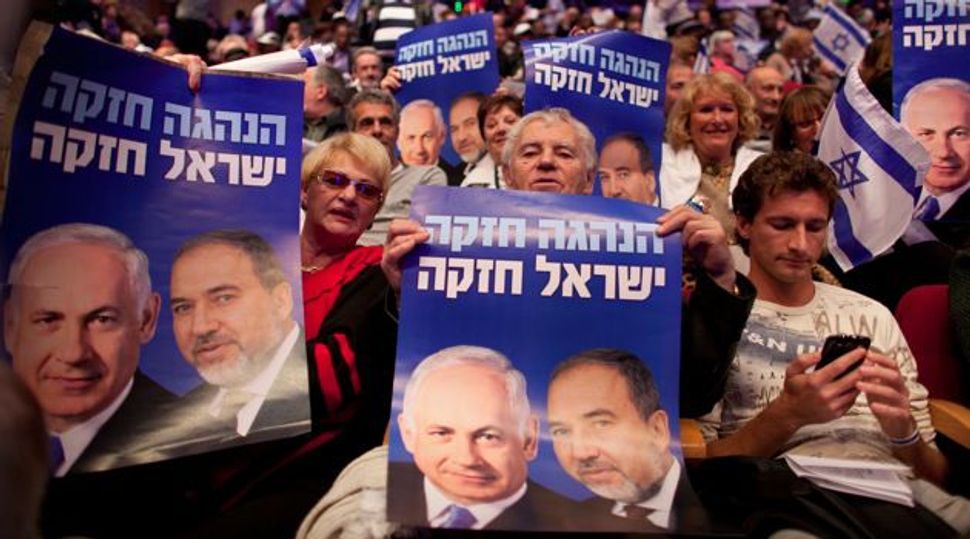 Having finally come to the end of a grueling election season in the United States, American Jews — certainly this one included — could be forgiven for wanting to take a long break from electoral politics. Yet those of us invested in the Israeli future, with friends and family living in cities recently targeted by Hamas attacks, well know that another important Jewish election looms on the horizon: the Israeli elections, called by Israel’s right/far-right governing coalition, currently ahead in all the polls.

From our perch in America, those of us without Israeli citizenship are relegated to the passive role of spectators and occasional commentators. Yet this election is nonetheless a defining moment, not only for Israel but for the American Jewish community as well.

Why? Because of three new developments — the new Likud/Yisrael Beiteinu political list, the E1 construction plan and the gradual coming-out of the Israeli right-wing narrative regarding the Palestinian issue, together with Palestine’s statehood status ­— have changed the game forAmerican Jews. We now know that the ruling parties in Israel are not interested in a peace agreement with the Palestinians or in a two-state solution to this crisis, and that they believe a long, protracted conflict is inevitable. Thus, we can no longer pretend all of “us” want to make peace. “We” don’t — some of us believe that the best we can hope for is a managed occupation.

Although such a position is eminently reasonable and defensible, the reason that its partisans don’t admit that they hold it is obvious: Europe, the United States and the rest of the civilized world do not agree. They believe that the current situation, in which 2.5 million Palestinians don’t have the right to vote and aren’t citizens of the country that rules over them, is unacceptable. To say it offends democratic values is an understatement. So, for more than 40 years, the public discourse — duplicitous as it may be — has been that there must be a solution to this crisis that involves these 2.5 million people having the same basic democratic rights as everyone else in the Western world.

The truth, however, is turning out to be quite different from the rhetoric.

First, there’s the Likud’s new list of parliamentary candidates. This list has purged everyone in Likud who had been interested in some form of negotiated peace, as well as its more moderate intellectual leadership — Dan Meridor, Benny Begin, Micky Eitan and so on. In its place, it includes not only the followers of the rejectionist Avigdor Lieberman (now off the list himself due to a corruption inquiry), but also the know-nothing Moshe Feiglin, the anti-democratic Danny Danon and the xenophobic Miri Regev.

These may not be household names in America, but those of us who have lived in Israel and paid attention to politics know them well. Indeed, my centrist Israeli friends — some of whom have voted for Likud in the past — are gnashing their teeth. It’s as if the Republican Party nominated Rush Limbaugh and Glenn Beck to its presidential ticket.

Any American supporting the Likud now has to face the facts. This is not a list taking a somewhat harder negotiating line, or being a bit tougher on Iran. This is a list of nationalist thugs who pander to the absolute worst in all of us: fears, prejudices and most of all, anger. This tactic works; after all, what supporter of Israel isn’t furious with Hamas? Who didn’t entertain a thought of “turning Gaza into a parking lot,” as one conservative friend of mine proposed? It’s natural to feel these emotions — but ill-advised to act on them, and cynical to exploit them.

Second, among Israeli conservative pundits, a new — or at least newly discussed — narrative has taken hold. The story is that the Palestinian people are not ready for peace, and that this conflict will continue for 100 years. This past November, the writer Daniel Gordis made this point — as a statement of fact — on a panel I shared with him at the General Assembly. Danny Danon, a member of Knesset, made the same argument in an op-ed published in The New York Times.

Strictly speaking, this argument is not new. Netanyahu’s late father made it decades ago, and arguably it goes back to Ze’ev Jabotinsky’s claim that the Arabs are too proud to ever make peace.

But think about it: The intellectual leaders of the Israeli right, the brains behind the power today, are telling us that there will be no peace for 100 years: 100 years of occupation (within a few decades, of 5 million people); 100 years of Israeli 18-year-olds risking their lives at checkpoints; 100 years of two-faced Israeli policies, of expanding settlements while maintaining the propaganda of peace. This is appalling to consider — and yet it is what’s being offered in this election.

And it’s not just words. The decision to build in E1 in retaliation for the Palestinian statehood bid is yet another nail in the two-state solution’s coffin. An Israeli E1 would cut the West Bank in two. That’s not a state; it’s a joke.

It’s also naive. Israelis love to brag about how tough they are and how they don’t need their American uncles to protect them. “Don’t worry, America — Israel is behind you!” But the reality is that Israel is a small state still dependent on American foreign aid and American protection. Is Israel really ready to be the next North Korea, a worldwide pariah that remains afloat thanks to its nuclear arsenal, but is reviled all around the world? Sure, some Israelis may think they’re already seen that way, and they may well vote based on that perception. But that’s paranoia, not reality. The reality of an ostracized Israel, an Israel like Libya or apartheid-era South Africa, with global economic sanctions that choke Israel’s economy, and with an end to Israel’s most important strategic alliances, can be considered seriously only if one has drunk the nationalistic Kool-Aid of Israel’s most jingoistic partisans.

Which, of course, many on the new Likud/Beiteinu list have done.

This is why there’s such heated agreement between the Israeli far right and the anti-Israel far left. Both believe in one, bi-national state between the Jordan and the Mediterranean. Both believe that time is on their side, and so both take steps to sabotage the two-state solution. The only difference is that the Israeli right believes the state should be an undemocratic Jewish one, while the anti-Zionist left thinks that it should be a democratic Arab one. In my opinion, both are leading us to hell.

If, as Americans, we cheer the re-election of this government, we are supporting 100 more years of occupation, and a perilous path for Israel on the world stage. In my view, such a position is not just anti-peace and anti-Jewish values but also anti-Israel, because it is so dangerous to Israel’s very survival — in the real world, if not the far right’s fantasyland. It is the path of madmen and mad men: leaders intoxicated with nationalistic rhetoric, and a population that is (understandably) enraged at the Palestinians.

Of course, this regime believes it is doing what’s best for Israel. And of course, it’s hard to argue for a Palestine in the West Bank when the Palestine in Gaza recently rained rockets on Israeli civilians across Israel. But pro-peace, pro-Israel people are not ignorant; we know the difficult road that lies ahead, and the many conditions that will be necessary for any solution to be implemented. Yet we also know that Palestinian Prime Minister Mahmoud Abbas has, once again, explicitly endorsed a two-state solution more or less on the 1967 lines (accompanied by unfortunate and belligerent rhetoric — but hardly more belligerent than what one hears from Israeli politicians), and that Israel’s moderate-left and centrist parties are ready to sign such a deal. And, thanks to Israel’s right, we now know the horrifying implications of the alternative.

The choice Israel faces is stark this year: between moderates and rejectionists, between a two-state solution and a one-state morass, between hope and fear. We in America may be passive, but we can no longer claim to be blind.