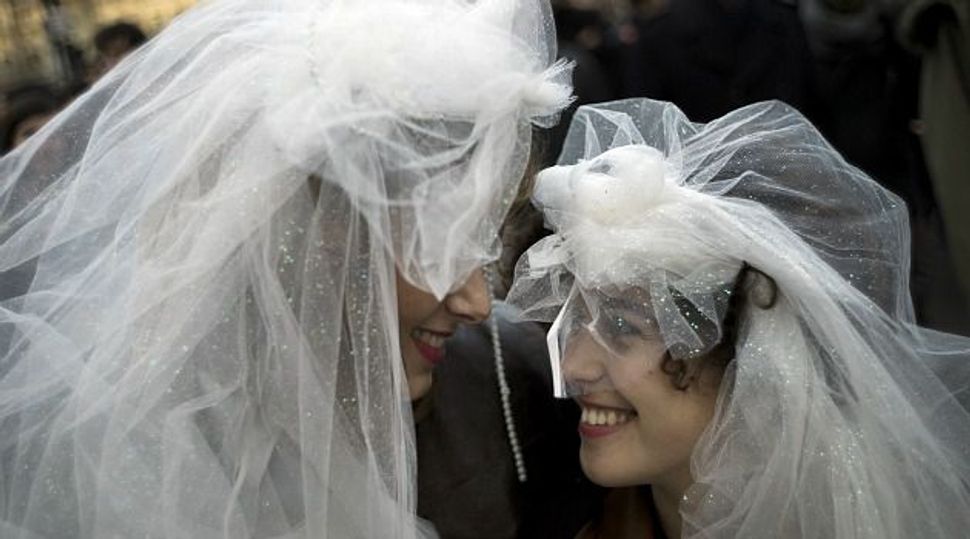 It’s looking like 2013 will be the year of same-sex marriage. The Supreme Court will decide on the constitutionality of the Defense of Marriage Act (it’s up to Justice Kennedy) and California’s Proposition 8, both of which try to criminalize marriage that is not between a man and a woman.

The Obama administration, already not defending DOMA, may take a more active role in overturning it.

And with the momentum of last November’s same-sex marriage sweep in four states where the issue was on the ballot, look for smaller marriage battles in various contexts (spousal benefits, partner recognition, etc.) and the run-up to more state referenda in the next few months.

And yet, in many parts of the LGBT activist world, there’s less enthusiasm about marriage than you might expect. First – and, shh, please don’t tell anyone – we know that we’ve won. The trend lines are all in our favor, and the demographic and spiritual re-alignments have already occurred. Even Newt Gingrich is telling Republicans to bow to the inevitable.

More to the point, many in our movement are ready to move beyond marriage to focus on the most vulnerable: kids still killing themselves out there, people still being bashed and targeted, and folks in communities of color, rural communities, and other places where not everyone watches “Modern Family.”

It’s still legal to be fired simply for being gay in many states. And 2012 saw a wave of lethal violence against transgender people, particularly transwomen, that cries out for more education, protection and prosecution.

Finally, there are increasing efforts to erode our civil rights under the bogus guise of preserving “religious freedom.” This is the “freedom” to bully gay kids, to discriminate against same-sex couples, and to disobey laws of universal application by citing religious precept. Make no mistake: The people behind this approach are the usual religious right extremists — evangelicals and anti-abortion conservative Catholics, along with the fig-leaf of a small handful of Orthodox rabbis used to mask their theocratic agenda. This will be a significant front for the fight in 2013 as well.

Jay Michaelson is the founder and executive director of Nehirim and a contributing editor to the Forward.