Sandy Is Still With Us 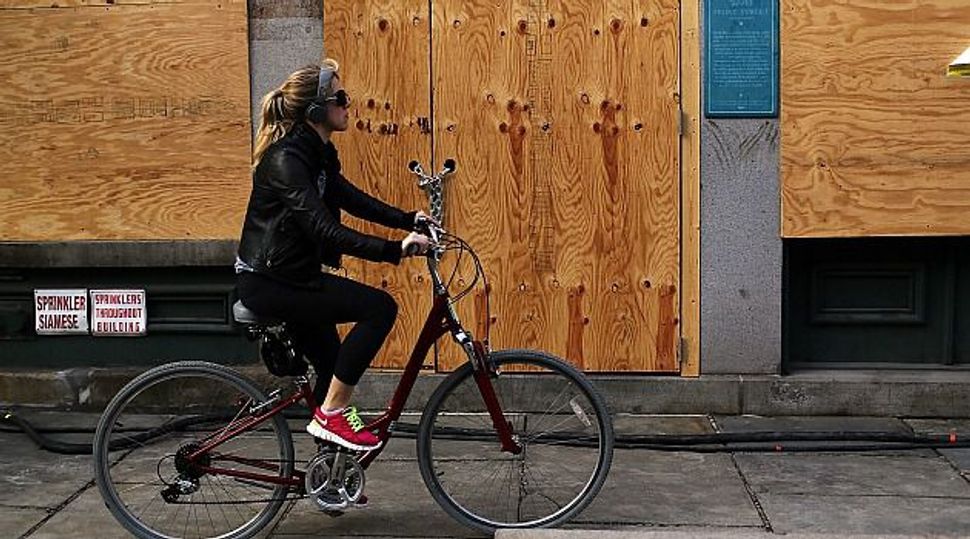 On Friday, October 26, staff members left the Forward offices with the warning that a wicked storm was going to bear down on New York City that weekend. Better bring home notes in case you have to write your stories from someplace else on Monday, they were told.

One day turned into eleven weeks. Only by Monday, January 14 were the offices on Maiden Lane in Lower Manhattan ready to accept everyone who works on the Forward’s English and Yiddish publications, along with the business and administrative staff that supports them. Hurricane Sandy ravaged the office building as it did entire neighborhoods along the turbulent East Coast, causing billions of dollars in damage and taking an estimated one hundred lives.

Everyone knows that. But here’s what you may not know:

Outside the Forward’s offices, hulking generators clog the streets and fill the air with an endless thrum as some buildings still struggle to obtain reliable heat, power, phone service. Scores of businesses are still shut, posting plaintive signs on huge slabs of wood or drapes of cloth, all but begging not to be forgotten. Lines outside the few open restaurants wind out the door at lunchtime. Even the Starbucks is closed.

This neighborhood, which had only recently come back to life after the terrorist attacks nearby on 9/11, will again recover — it’s too close to the lusty halls of Wall Street and the charming blocks of historic old Manhattan to lose its footing. But so many other neighborhoods and towns face the existential question of whether they can ever rebuild, and at what cost.

While some Republicans in Congress yesterday stupidly resisted appropriating federal funds for storm recovery — really, is there a better definition of the constitutional mandate to “promote the general welfare” than this sort of emergency aid? — even larger challenges lay ahead. The imperative to prepare for the next storm has lost its urgency, drowned out by the sheer size of the challenge and the reluctance of Americans to plan for a disaster they can’t instantly see. But that storm will come. We know it but we don’t want to admit it.

Just like we don’t want to admit that this extreme, erratic weather is caused at least in part by climate change that is warming the planet and altering the landscape. As Justin Gillis reported January 14 in his energy and environment blog on nytimes.com, a draft report issued by a federal advisory committee is warning that a pattern of global climate change, driven largely by human activity, is already upon us. Glaciers are melting, sea levels are rising, oceans are becoming more acidic, while heat waves, heavy downpours, floods and droughts are becoming more common.

“Climate change is already affecting the American people,” declares the opening paragraph of the report, issued under the auspices of the Global Change Research Program, which coordinates federally sponsored climate research, Gillis wrote.

Those rendered homeless and jobless by Hurricane Sandy certainly know with painful clarity how climate change has affected their lives. In the storm’s deadly wake, there was a spurt of national conversation about the need to better protect shorelines from flooding and infrastructure from succumbing to the elements, but that seems to have receded faster than the muddy outlines of Sandy’s wrath. Meanwhile, serious federal policy to begin to arrest climate change is once again being resisted by those who cannot or will not recognize what is before us.

It’s not over. The evidence is everywhere. Even outside our door.

Sandy Is Still With Us