Israel’s Supposed Lurch to Right Was Just a Myth 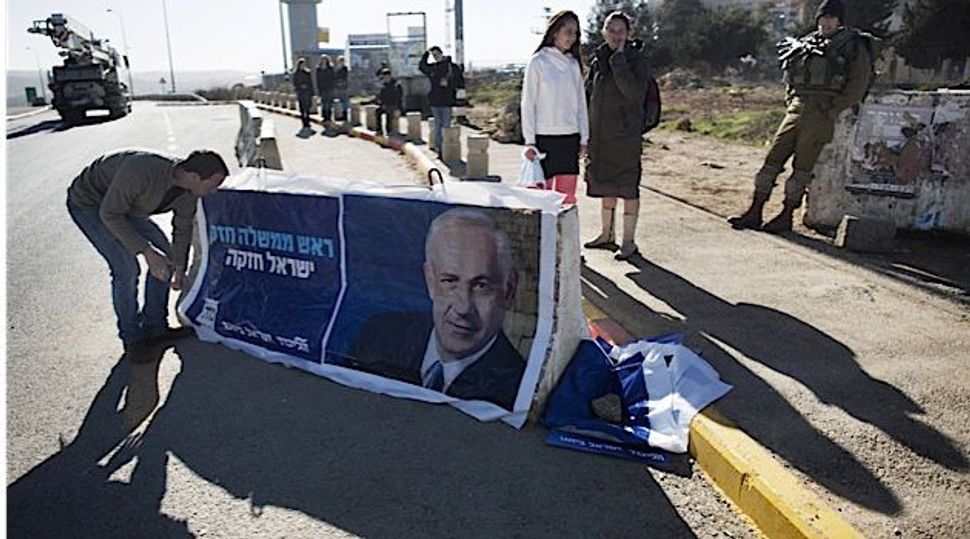 For a few years now I’ve been carping at the widening gap between perception and reality among both critics and supporters of Israel in the United States. Now that I’ve arrived in Washington for a prolonged stay (a new job, but please don’t call it yerida), I’m just starting to see how deep the rabbit hole goes.

The immediate example of this is, of course, the widely reported “Shift to the Right” by the Israeli electorate. Now, I understand why many American Jews might be troubled if Israel were turning away from their own cherished values. But if the elections have proved anything, it’s that Israelis never did lurch to the right, after all.

Like so many other narratives spun by interested parties during an election cycle, the red-shift theory was based on a selective reading of the data, and on the accumulation of multiple mini-myths adding up to one fat pile of bull. To wit:

Mini-myth #1: Israelis have given up on the two-state solution in favor of pro-settlement belligerence. The most glaring salient fact, affirmed by repeated polling, is that while two decades ago the two-state solution was a matter of harsh debate in Israel, today it has achieved consensus status — including among a majority of voters for right-wing parties, and two-thirds of Israelis overall. If anything, this sounds more like a shift to the left over time.

Also, if you take a look at bloc voting, it turns out that Israelis have been surprisingly consistent in recent years. If we bracket out the Arab and religious parties, what remains is a left-right divide that gives the right bloc 43 seats in the new Knesset, to the left’s 27 — plus 19 more for the liberal-centrist Yesh Atid party, which, headed by TV celeb Yair Lapid, has a voter base that leans much more left than right. In the outgoing Knesset, it was 49 seats for the right, to the left’s 44.

The Knesset before, elected in 2006, had Ehud Olmert’s Kadima party taking up a genuinely centrist position and winning 29 seats, splitting the rest between left and right. But in the elections before that, in 2003, the right clobbered the left, 57 to 40. So where’s the Shift to the Right?

Mini-myth #2: Israelis are pushing for increasingly right-wing politics: Look at the merger between the Likud and Yisrael Beiteinu and at the success of Naftali Bennett’s Habayit Hayehudi. What few people notice is that these two developments are actually one and the same — and they belie the Shift-to-the-Right thesis.

The merger itself was much less a policy change, or a reflection on changing voters, than it was a tactic designed to guarantee Benjamin Netanyahu’s continued premiership. Forced to resign from the foreign ministry, Beiteinu Chairman (and former Likud director-general) Avigdor Lieberman was suddenly weakened, and his party’s voters needed a compelling home. Netanyahu correctly calculated that the merger would create a large party unmet by anything on the left.

Bennett’s achievement (if you can call it that) was a natural outcome of that same merger — but you can only understand this if you look from the perspective of a settler activist voter. For while people to the left of Bibi saw it as a shift to the right by the Likud, pro-settlement voters saw it as a shift to the left by Beitenu, whose secularism and advocacy of land swaps made Lieberman’s party suspect in their eyes to begin with. It was only natural that a chunk of them would defect to Bennett, the new kid on the block, but that doesn’t mean their beliefs changed.

Mini-myth #3: The rise of Moshe Feiglin in the Likud, at the expense of liberals like Benny Begin and Dan Meridor, suggests an abandonment of classic pro-democracy views in Israel’s ruling party. For this to be true, two other things need to be true: (a) that Israelis choose midlevel politicians mainly on their positions regarding the Palestinians, and (b) that Feiglin getting the 15th spot on the Likud list will translate into influence on Israeli policy. Neither of these, however, is likely. Feiglin’s bizarre combination of jingoism and ’60s-style groovy radicalism (including frequently quoting Martin Luther King Jr. and advocating the legalization of marijuana) makes him far more entertaining than the old-school Likud moderates; but No. 15 turned into No. 22 once the Likud’s list combined with Beiteinu’s for the Knesset faction. Feiglin will be a backbencher, spliff in hand, while Meridor and Begin could easily end up as government ministers.

Mini-myth #4: The disarray of the left-wing parties is yet another case in point. No, in this case it proves the reverse — and not just because the far-left Meretz party has bounced back to six seats from three. Kadima’s evisceration reflected the inevitable collapse of a weird alliance between ex-Likud politicians and disaffected Labor voters who spent the past decade waiting for their home party to become viable again after the second intifada and the collapse of Oslo. With the rise of radio-celeb Shelly Yachimovich (most likely the new leader of the Opposition), Labor has returned to its historical position as a plausible ruling party — and the voters have gone back, as well. To the left.

Mini-myth #5: Netanyahu will form a hard-right coalition together with Naftali Bennett’s Habayit Hayehudi, increasing international isolation and making Israel a pariah. Um, when has Bibi ever done that? Given the opportunity, Netanyahu has always preferred to balance his international standing and keep people guessing. In 1996, Netanyahu rejected a coalition with Rehavam Zeevi’s Moledet party — at the height of anti-Oslo Accords backlash in Israel — instead forming a centrist government that accepted the accords. His second government, in 2009, was built on an alliance with then-Labor leader Ehud Barak. Now, after the elections, Yesh Atid has already made it clear that it’s happy to join the government, as will Tzipi Livni for the right price. My money’s on another centrist coalition.

But you wouldn’t know it from reading coverage of the Middle East from certain commentators over the past few months who, for whatever reason, preferred to perpetuate the headline-grabbing story rather than a more nuanced, if less sexy, political reality.

David Hazony is a contributing editor at the Forward. He is the author of “The Ten Commandments” (Scribner, 2010).

Israel’s Supposed Lurch to Right Was Just a Myth