Egypt on the Edge 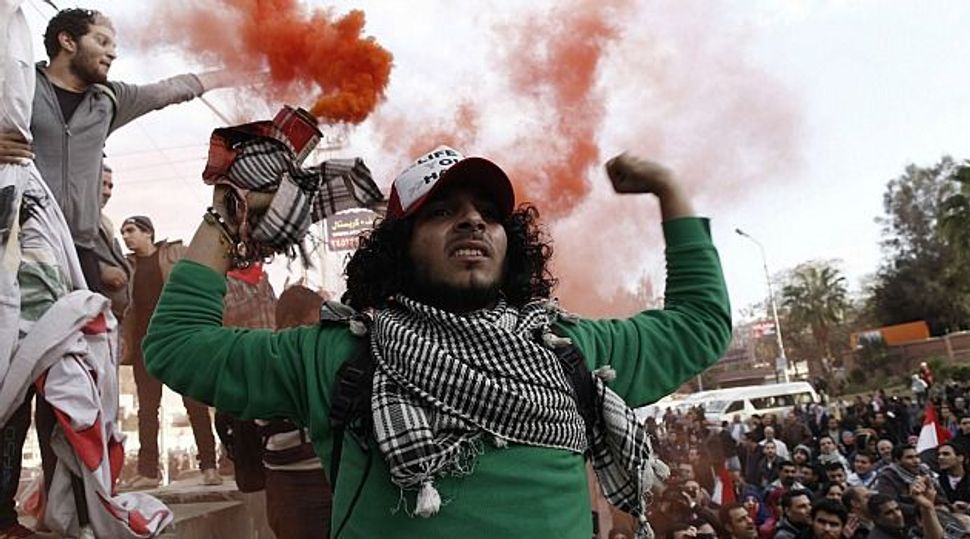 Amid the blaze of graffiti in and around Cairo’s Tahrir Square — from hastily scribbled political slogans to elaborate portraits of the many martyrs of Egypt’s unfinished revolution — is an arresting image that encapsulates some of the rage engulfing the country right now. It shows the easily recognizable face of Mohamed Morsi, the embattled president and former Muslim Brotherhood official, pictured with the domed headress of Egypt’s Pharaohs.

No words are necessary; the message is unmistakable. There was a time in Egypt’s storied history when the Pharaohs were all-powerful, beloved and feared, ruling a vast and wealthy empire. Now, such unbridled authoritarianism is deeply hated, and as of this writing, Egypt hovers on the edge of a crisis that could undo the glorious gains of its 2011 revolution.

The inspiring images of young men and women occupying Tahrir Square two years ago, bravely resisting the thuggery of dictator Hosni Mubarak’s regime, have been replaced by angry rock throwers fed up with the slowness of reform and the absence of real change in their lives. The economy is in a freefall, with the Egyptian pound rapidly losing value and the Mubarak regime’s decades of disinvestment evident in crumbling buildings, unpaved roads and children who beg with abandon. Tourism is at 17% of what it was in 2010. Unemployment among educated young adults is endemic.

All this would argue against further American diplomatic and economic engagement. Why get involved in such an unpredictable environment? Why help out an Islamist government whose leader is known for ugly, anti-Israel statements, persistent human rights violations, and who resorts to blaming outside collaborators for fomenting street violence he himself cannot control?

That’s the sentiment among congressional Republicans, who have successfully held up $450 million in American aid to Egypt since Morsi’s election last year. But simply pulling back from Egypt would be a serious mistake, risking American influence in the region and inviting other, less friendly countries to write large checks and dictate the behavior of what, despite its current troubles, is still the most important player in the Arab Middle East.

Americans don’t need to rail against the ruling Muslim Brotherhood — Egyptians are already doing that, sometimes more violently than they should. The Morsi government has lost the faith of the largely liberal but fractured opposition and the more fundamentalist Salafists, who scored surprisingly well in the last election and who would pose a much more serious threat to our interests than would the generally middle class, market-oriented Brotherhood. The religious fervor in Morsi’s party may be less of a worry than its members’ inexperience — or even incompetence — in governing, as evidenced by the aggressive push to ratify a flawed constitution and the routine use of emergency decrees. Morsi isn’t likened to Pharaoh for nothing.

America can’t turn away. Nor can it send unconditional aid into such a risky, potentially explosive situation. Some sort of middle ground is needed. One possible blueprint comes from a bipartisan task force convened by the Washington Institute, which argued for continued American aid with conditions to strengthen the Morsi government’s commitment to growing Egypt’s democracy, and combating terrorism in the Sinai. “While Washington cannot convince or compel the Islamists governing Egypt to give up their deeply held ideology, the United States can use its leverage to affect Egyptian behavior,” the task force wrote in the report released this past November.

Following such a path requires skillful and delicate diplomacy, for exacting too heavy a price risks alienating the Egyptian government and allowing others to fill the vacuum. A failed Egyptian state would be a disaster for Israel, Jordan and the entire region. Surely the spirit of Tahrir Square can be kept alive with the right kind of American help.

Egypt on the Edge