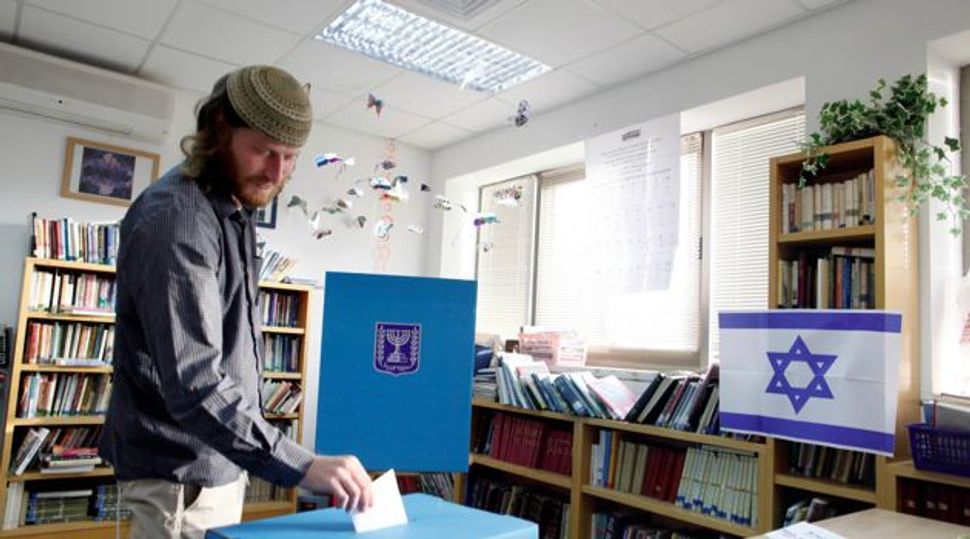 God On Their Side: A settler in Ofra casts his vote in the January 22 parliamentary elections. Image by Getty Images

How did Benjamin Netanyahu do in West Bank settlements?

Considering his party’s pro-settlement policies and the staunch pro-settlement positions of its leading Knesset members, you’d expect Netanyahu’s Likud-Beiteinu list to perform better among West Bank settlers than it did in Israel proper. It didn’t.

Surprising as it may be, overall, only 19 percent of the settlers’ vote went to Likud-Beiteinu, compared to 23 percent of the overall Israeli national vote, according to official Israeli data.

The settlers’ rejection of Netanyahu’s party is even more striking if you consider the voting patterns in national-religious “ideological” settlements, those whose residents were the chief pandering target of Prime Minister Netanyahu and his senior fellow travelers in the years and months that preceded the elections. Likud’s performance in such settlements was astonishingly poor: 8 percent in Beit El, 13 percent in Elon Moreh and Eli, 11 percent in Ofrah and Kedumim and as low as 5 percent in other, smaller ideological settlements.

The leaders of Israel’s largest party are now undoubtedly examining the voting trends among settlers, as they try to understand how Likud and Israel Beiteinu lost almost a quarter of their combined strength, deflating from 42 seats in the outgoing Knesset to 31 seats in the incoming Knesset. They are surely considering the price they paid for trying to appeal to the ideological settlers, a population that is perhaps 5 percent of the Israeli public, and an even smaller sliver of the Israeli electorate.

Why a small sliver? Because according to the settlers’ own data, only about 45 percent of Israelis living in the West Bank (not including East Jerusalem) identify with the ideological national-religious hard core of the settlement movement. And because only 51 percent of the settlers are eligible to vote (a full half of this population is under 18), compared with an Israeli national eligibility rate of 72 percent. True, the turnout rate among the settlers is higher than the national average (around 80 percent compared to 67 percent nationally), but since the actual number of voters residing in the West Bank is so small, compared to the overall national number, that high turnout rate among settlers makes but a marginal difference.

So who did the settlers vote for? Well, the settler population is not monolithic. A distinction is usually made between the “ideological” settlers, those who chose to live across the Green Line to fulfill a biblically prescribed mission, and the “quality of life” settlers, who move to the West Bank in pursuit of cheaper housing. Most of the “ideological” settlers live in remote settlements, farther from the Green Line, while the others typically live closer to Israel, in so-called “settlement blocs,” which may be annexed to Israel in the context of an Israeli-Palestinian peace accord. The second category includes settlements that are largely secular and settlements that are largely or even exclusively ultra-Orthodox.

Most interesting, however, is the voting pattern among ideological settlers, the dynamo of the West Bank settlement movement. There, the extreme right reigns supreme.

In ultra-radical settlements near Nablus and Hebron, the leading party is the Kahanist Otzmah Le-Israel (Might to Israel). This extremist party, which nationally did not meet the 2 percent threshold to make it into the Knesset, was almost uniformly one of the three largest parties in ideological settlements. In Yitzhar, it received 72 percent of the vote, in Tapuah 30 percent, in Kiryat Arba 28 percent and in Elon Moreh 27 percent. Even in the less radical national-religious settlements, this party’s showing is typically in the double digits (24 percent in Shiloh, 14 percent in Karnei Shomron and 13 percent in Kedumim).

In the less radical ideological settlements, unsurprisingly, the big winner is Naftali Bennet’s Habayit Hayehudi (The Jewish Home), the extreme right-wing current incarnation of the National-Religious Party. In Kedumim, it gets 70 percent of the vote, in Ofra 74 percent, in Eli 71 percent, in Psagot 78 percent and in Elon Moreh 55 percent. Nationally, Bennet’s party got 9 percent of the vote.

In almost all the ideological settlements, Habayit Hayehudi and Otzmah Le-Israel, combined, receive between eighty and ninety percent of the vote.

What can we learn from this pattern? First, it reaffirms that the ideological settlers’ worldview differs greatly from that of most Israelis. Second, it shows that the ideological settlers are extremely successful in creating an image of having a larger electoral footprint than they actually have. Third, it shows how successful they were at manipulating Likud. In the past few years, ideological setters registered in droves as members of Likud’s Party Center, acquiring the right to vote in the party primaries. That, to a large extent, explains the strong showing of extremist pro-settlement Likud leaders in last November’s primaries and the rejection of relative moderates such as Dan Meridor. Fourth, we learn that while the settlers worked hard to shape the makeup of Likud’s Knesset list, they ended up following their heart and voting for extreme right-wing parties. Lastly, one should keep in mind that numerically, the ideological settlers’ vote is a drop in the bucket — maybe two or three percent — of Israel’s overall electorate. They may be a very well-mobilized, influential pressure group, but a small group as well.

Netanyahu should keep all that in mind as he finds himself under pressure from President Obama and from Yair Lapid to tackle the settlements in pursuit of peace.

Ori Nir, formerly the Forward’s Washington correspondent, is the spokesman for Americans for Peace Now.