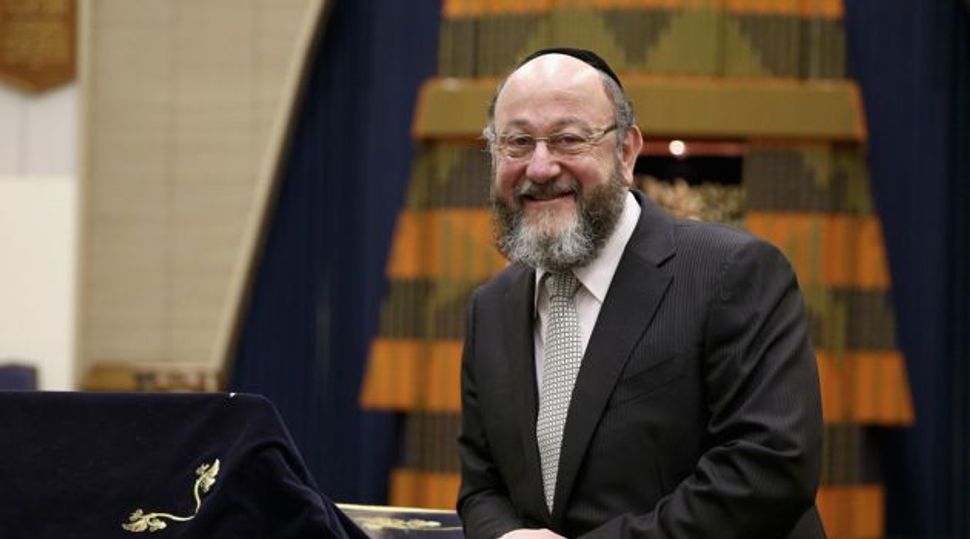 New Chief: Rabbi Ephraim Mirvis Is the new chief rabbi of the United Kingdom. But is he really needed? Image by Getty Images

Finally, after more than a year of deliberation, the United Kingdom has chosen Ephraim Mirvis to be its new chief rabbi, replacing Lord Jonathan Sacks.

Actually, much of that sentence isn’t correct. It isn’t “the United Kingdom” that chooses the chief rabbi. For all its pretensions to established status, the chief rabbinate has only a very limited state-sanctioned function — the licensing of marriages in some synagogues — and the state has no role in his selection.

So behind the imposing title of chief rabbi lies an often beleaguered office, struggling to reconcile the United Synagogue’s different wings. Outside the United Synagogue, other denominations, from Reform to Haredi, are clear that the chief rabbi does not represent them. At the national level, other Jewish leaders are invited to most state events alongside him.

As head of Jews College in the 1980s, Sacks was the poster boy for liberal, intellectual Modern Orthodoxy, with a substantial reputation as a public intellectual. He began his term in 1991 with a bold effort to reach out to all wings of the community and kick-start a process of renewal in a stagnating U.K. Jewish community.

But he raised expectations that he could not fulfill, and in the 1990s he was caught up in repeated controversies as his tendency to defer to the ascendant power of right-wing Orthodoxy resulted in grievous insults to non-Orthodox denominations. While his reputation outside the Jewish community has only soared, within the community he often has been a hapless and divisive figure.

The attempt to recruit his successor has not been easy. The Orthodox rabbinate, now dominated by educated Israeli and American rabbis who usually lean to the right, offered a small pool of candidates. An international search ultimately led nowhere.

Mirvis was the best possible choice for the new chief rabbi, given the circumstances. A respected, well-liked figure, he owes his reputation as a rabbi to one of the U.K.’s most vibrant Orthodox synagogues. He is unlikely to be more than a safe pair of hands, and that is probably best for all sides.

In fact, the office of chief rabbi is long past its sell-by date. From the 18th to the early 20th century, the chief rabbi, whose office was modeled closely on the established Church of England, provided an arguably useful service in demonstrating to non-Jewish British society that Jews were respectable enough to be emancipated. But in today’s multicultural Britain, where even the established church doesn’t command the loyalty of more than a small minority of Britons, the chief rabbinate is clearly anachronistic.

Indeed, it’s more than anachronistic. The most baleful effect of the chief rabbinate has been to retard the progress of Modern Orthodoxy in Anglo-Jewry. In its efforts to maintain itself as a quasi-established Orthodox denomination, the United Synagogue has become an institution that satisfies few.

It’s clear why the United States has never had a chief rabbi. In a religiously pluralist country, with no established church, there was no need or desire to set up a Jewish primate. In the innately free-market approach of American society, in which Jews, like everyone else, crave choice, it was always going to be impossible for any one leading denomination to claim superior status.

The effect of this pluralism has been to ensure that the United States has been the engine room of development of all the significant currents of contemporary Judaism — Haredi, Modern Orthodox, Conservative, Reform and so on. Unlike in the U.K., different currents can develop themselves without having a chief rabbinate challenging their legitimacy.

And yet the chief rabbinate has had one odd effect on Anglo-Jewry. The ossified established structure of the community has forced British Jews to be incredibly creative should they wish to escape its shackles. The chief rabbinate gave the generation of innovators who have transformed Anglo-Jewry since the 1980s something to kick against.

The shining example of this is Limmud, the non-denominational, do-it-yourself Jewish learning movement, which holds annual conferences. Developed in the early 1980s out of intense frustration at the stultifying anti-intellectualism and conservatism of Anglo-Jewry, Limmud has grown to be a global educational phenomenon whose effect on the community has been profound.

It is significant, then, that though Sacks was a Limmud regular in the 1980s, he never attended during his chief rabbinate, his participation effectively having been vetoed by a beit din horrified at its pluralism. Mirvis may or may not attend Limmud, but it hardly matters now: Anglo-Jewry has learned how to develop a vibrant community without the chief rabbinate’s help.

Keith Kahn-Harris is an associate fellow of the Institute for Jewish Policy Research and a visiting scholar at Oxford University’s Oxford Centre for Hebrew and Jewish Studies.