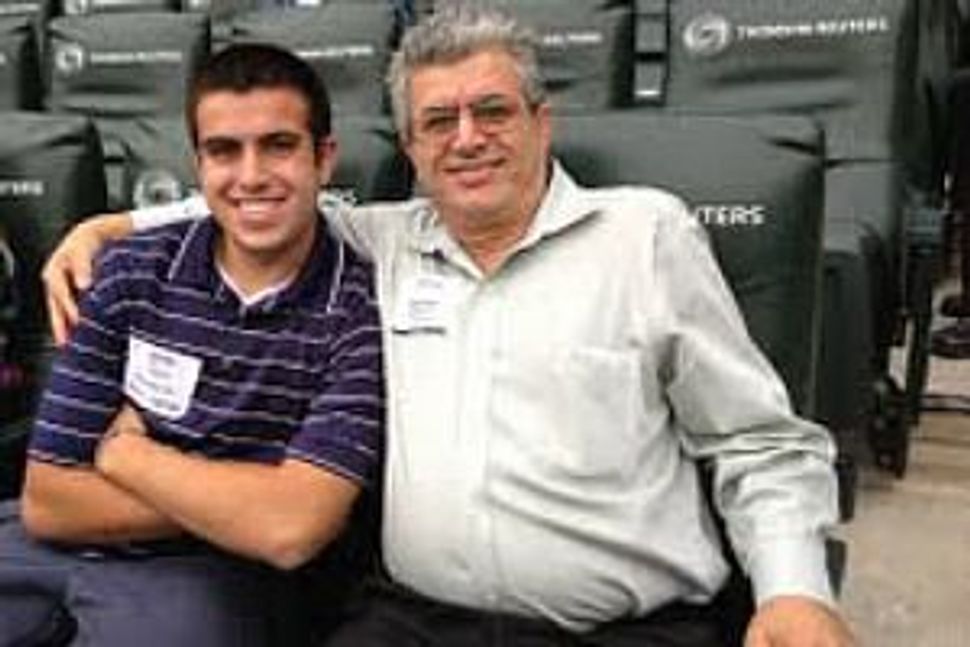 In Dad?s Name: Sami Rahamim with his late father, Reuven Rahamim, who was killed in a workplace shooting in Minnesota on the day after Yom Kippur.

As far as Sami Rahamim knows, the seating at the State of the Union address is random. He told the Forward that there “were couples invited who were separated.” His seat, as the guest of his congressman, Rep. Keith Ellison (D-Minn.), was “up in the gallery, facing the President on the left side.”

The man he was seated next to was Ruben Reyes, a district director for the Congressman Raul Grijalva (D-Ariz.), the congressman from the district bordering that of former representative Gabby Giffords. While waiting for the president’s entrance, Rahamim chatted with his seatmate and found that they were “aligned” on many issues and spoke about being an immigrant and “what it takes to make it in this country.” Another coincidence is that Reyes shares a first name and the same initials as Sami’s late father Reuven, who was fatally shot at his workplace, Accent Signage in Minneapolis, the day after Yom Kippur, September 27, 2012.

Sami was at the State of the Union along with 120 other survivors of gun violence sponsored by the group Mayors Against Illegal Guns They are spending the day after the address in small groups, “visiting our members of Congress, particularly the swing votes, to show what we really mean in this fight,” he said.

He had met many of the other survivors at a press conference sponsored by Mayor Michael Bloomberg on December 17 in New York, and says of the others that even though they have only met a few times “we are a close community, and share something extremely powerful.” In a dvar Torah he gave at his synagogue, Beth El in St Louis Park, Minn., on January 5, he wrote of how being with other survivors, there was a “profound lump sum of grief” and “yet, there was an immense feeling of strength and unity among us” because “we were all there to stand for something together.”

He spoke of Ellison, who is Muslim, as an “amazing host” who “made sure to introduce me to any members of Congress we ran into, at the reception or passing in the hall.” Prior to the address Rahamim and Ellison attended a reception hosted by minority leader Nancy Pelosi where he got to meet two personal heroes, the pro-Israel legislator Ted Deutch (D-Fla.) and Gabby Giffords.

The advocate in Rahamim was not star struck into silence at the event though. He told the Forward, that he was sure to speak with both Representatives Richard Nolan (D-Minn.) and Timothy Walz (D-Minn.) and ask them to support gun violence prevention measures.

“It is you guys, rural house Deomocrats who will win the fight,” he told the congressmen. “We are not going to be able to do it without you, we are counting on you.’”

Rahamim described the experience of being at the address as “one of the coolest things I’ve ever been a part of” being in a room with so many powerful people.

Yet as his Twitter feed says: “Yesterday was awesome. Today the real work begins” In the January 5 talk at Beth El, on the Torah portion of Exodus he spoke of Moses growing up “seemingly oblivious to the injustices, pain, and suffering going on outside the palace gates” and that Moses “felt the pain of others and knew he had to act. We must act.”

This Jewish young man, who was also filmed for a public service announcement for the mayoral group is certainly growing up fast on a national stage.