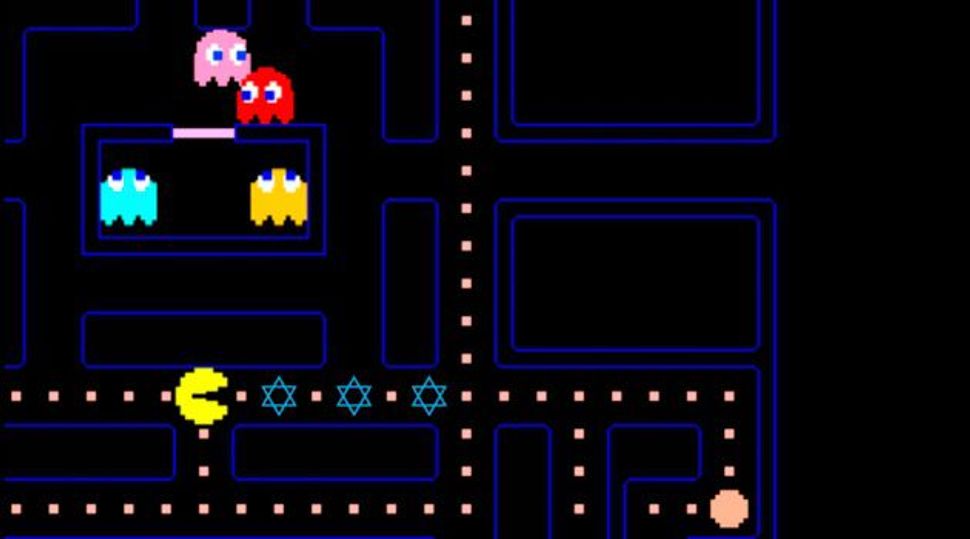 Jew-Man: Would more people practice Judaism if they could play it like a game? Image by Kurt Hoffman

In the past few weeks, I’ve become an expert at epidemiology. I didn’t watch a documentary or read a magazine article or take a class — I simply played a videogame called “Plague,” which requires players to pursue a single objective in order to win the game: Place a virus or bacteria somewhere in the world, and mutate it so that it wipes out all humanity.

Within a few hours of game play, anyone will quickly understand not only how a plague can spread, but also how to stop it. And thus the game becomes the greatest teacher one can ever imagine. One thing I’ve learned: If a plague ever starts, shut down the airports.

As it happens, online games are motivating people to lose weight, learn languages, improve their own behavior, solve social and environmental problems and organize political movements.

The biggest draws seem to be social games like Words With Friends — games that involve competition, but more often comparison and even cooperation.

Could we do this in Judaism? More than introduce learning games (which are already common), could we somehow encourage gamification so that people engage in Jewish life more actively?

The way to do it might start as a social competition of some kind. If people simply logged Jewish activities on a website so that positive behaviors are rewarded — even with fictional and entirely valueless awards — you’d suddenly have an immediate feedback loop.

People would do things to earn rewards, and then compete with each other. Here’s a simple example: If congregations logged their daily minyan attendance and published the data daily, I imagine minyan attendance would go up nationwide. If Daf Yomi, the act of reading a page of Talmud a day, were to be combined with a daily quiz on content and people could compare their quiz scores with those of their study partners, they’d surely focus more each day.

The scolds out there will say that Judaism doesn’t need to be a game or competition and that it offers its own eternal rewards anyway. That’s true, but that doesn’t mean Judaism couldn’t benefit from some gamesmanship.

We know that games work to change behavior and improve insight. For example, people are more likely to lose weight when they are part of a public weight-loss competition than when they do it on their own. Ordinary amateur athletes log their workouts on a website called Strava. Despite the fact that literally nothing is at stake, these people compete as if something were. Lance Armstrong was kicked off the site after he admitted his doping.

And what about Foursquare? I know a handful of people who attach great significance to being the “mayor” of locations important to them. Regular Facebook users value their friend count. Twitter users measure their re-Tweets and new followers. Does it matter? Sure it does. Because people care about it.

The goal is not so much to win as to measure and improve. People attach value to their Facebook friend count because it’s a proxy for their social standing. They value what they can compare, and they compare what they can measure.

What we need is something like Nike’s FuelBand, which measures steps taken, calories burned and so on, but for the Jewish soul. Let’s call it the JewBelt. It could even look like tefillin.

Maybe the JewBelt could measure how often we devote ourselves to moral thought, text study and proper observance of dietary laws. Logging in the data would reveal a chart of Jewish devotion — trackable, shareable and easily graphable.

I would love to see how often my fellow Jews are able to achieve spiritual clarity. What keeps people on the road of morality? What is the best time for Jewish learning? I would love to learn how others experience these things. I might even emulate them.

If Jews aren’t ready for this kind of individual measurement and online comparison, we could start at the organizational level. I would love to have tracking data on a variety of key components of communal life. In a sense, we already do this with major charitable gifts. Every organization publishes a list of its top givers in dinner programs. Do they do this to thank the givers? No. They do it to shame the non-givers or the too-little-givers.

We need to apply this principle on a broader level, and with deeper impact on other aspects of Jewish organizational life.

If the information were posted publicly and in real time, think of what that would reveal about American Jewish life. We wouldn’t have to wait every few years for some big census underwritten by the federation. We could do away with lists of important Jews — such as the one published in this newspaper — and see just who is doing measurably important things.

We could simply self-report our growth or diminishment as a people, one person at a time. We might learn something.

Noam Neusner is a principal with the communications firm 30 Point Strategies. He was a speechwriter for President George W. Bush. Follow him on Twitter @Glutens.