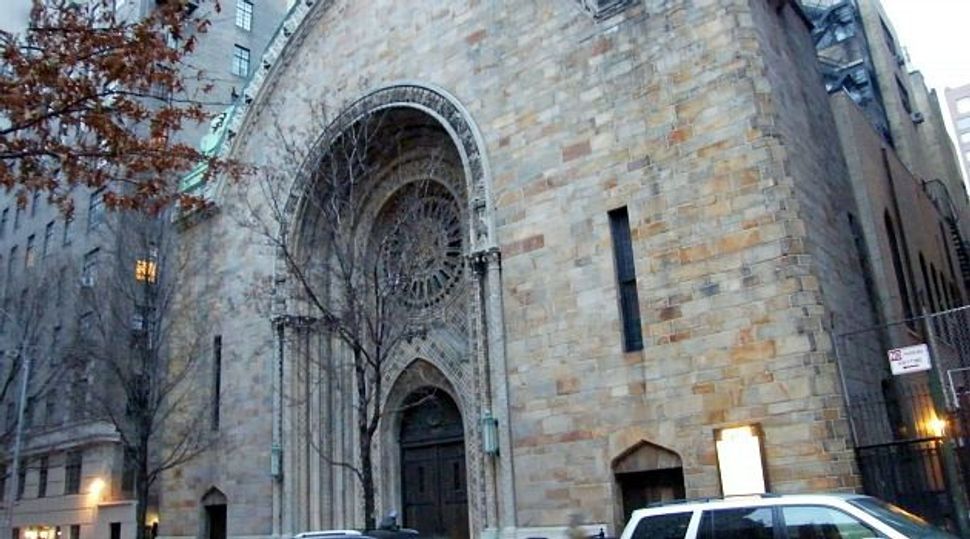 Serial Member: Jordana Horn belongs to B?nai Jeshurun in Manhattan and another synagogue in New Jersey. She may join a third and is being wooed by a fourth shul. Image by getty images

My family belongs to two synagogues. In two years, when our two smallest children start going to synagogue nursery school, we’re probably going to join the nursery school’s synagogue, too. Have I mentioned that we are also being actively recruited as members of a fourth synagogue?

Up front, let me be clear: Not everyone should join four synagogues. But I worry very much about a future Jewish community in which people join not even one. Synagogue membership can be expensive, sure. Trust me: I know. But I don’t see how Jewish communal continuity can possibly be achieved without them — nor do I think it should.

Our personal synagogue spread-thin-ness comes from a few factors. We belong to B’nai Jeshurun in the city as our spiritual home base; however, we’re New Jersey residents (to my husband’s chagrin), and therefore, we belong to a second synagogue, where our children go to Hebrew school and where my extended family belongs.

We will be sending our daughters to a third synagogue, geographically closer and therefore easier for my work-at-home schedule and for nursery school. And when we have two kids there, it will probably make more economic sense to join and get the tuition discount for members. And the fourth? Well, we just went there at a friend’s invitation one Sabbath, and started getting courting e-mails from the membership committee.

All this adds up to a lot of Sukkot dinner invitations. And a lot of Purim baskets.

Don’t think that I’m “just a girl who can’t say no.” The checking account is, after all, finite. But the dues to join a true community are worth the price of admission. A synagogue is an essential “home base” of Judaism. Without that community home base, we are at risk of becoming, quite literally, nothing.

On my “home” website, Kveller.com, a blog post published almost a year ago still haunts me. In the piece, the writer — an engaged, smart Jewish woman — talked about visiting numerous synagogues and not finding any of them palatable, in terms of either the service or the social environment.

Then, the writer connected with people who were looking to establish an “alternative Hebrew school”: that is, a Hebrew school not affiliated with a synagogue. Part of the lure of such a venue, as she described it, would be not having to pay thousands of dollars in membership fees.

In this group, she found the Jewish engagement she sought — and I fear that the synagogues in her area lost a potentially involved Jewish family. “I think it’s great that you are taking an active role in your children’s Jewish education,” I wrote in the comments to the piece. “I also think/know synagogues have what to worry about, as more and more families either a) don’t care enough to join or b) care enough to know that the synagogue is wrong for them. There’s got to be a big reboot on synagogue life in America in order to make it more appealing to people like you.”

Should subsidized memberships be available for younger members, or for members in not-particularly-well-paid jobs? Yes. Should “membership scholarships” be available to members of the community who are willing to commit to a certain number of hours of synagogue-related volunteer work? Yes. Basically, I believe that anything can and should be tried to make sure that synagogue membership numbers grow rather than diminish.

Why do I feel that being a member of a synagogue is so fundamentally necessary? It’s not just because I have plenty of rabbi friends that I don’t want to see out of work. It’s really because I see an inevitable snowball effect: If you decide you can “do something yourself,” why not? Why bother with the institutions? And Judaism is actually an institutionally centered religion and culture.

Everything, from the mikveh to keeping kosher to burying the dead, requires the presence of other Jews. Even prayer requires a minyan. Each one of these structures is in place so as to ensure that we don’t try to “go it alone,” and that we build communities of support and strength.

As fewer and fewer Jews go to the mikveh, though, or keep kosher, or care particularly about the chevra kadisha existing, much less about being part of one, synagogue membership starts to look outdated — only a necessity for setting the stage for the lavish bar or bat mitzvah. And even that rite of passage is being outsourced by many, with freelance clergy offering families the opportunity to stage a self-designed bar or bat mitzvah in the location of their choice — perhaps even the party venue itself so guests only need park once.

While you could argue that you’d rather keep searching than settle on a synagogue that doesn’t meet your needs, I’m a big proponent of changing institutions from within. I’d like to see synagogues partner immediately with young members, independent members and family members and build chevruta — smaller, welcoming groups that would facilitate relationships and discussions.

There is no Jewish continuity without Jewish community. And it’s incumbent on those of us who care to make it so, and to make it grow.

Jordana Horn is the former New York bureau chief for The Jerusalem Post and a contributing editor to the parenting website Kveller.com.