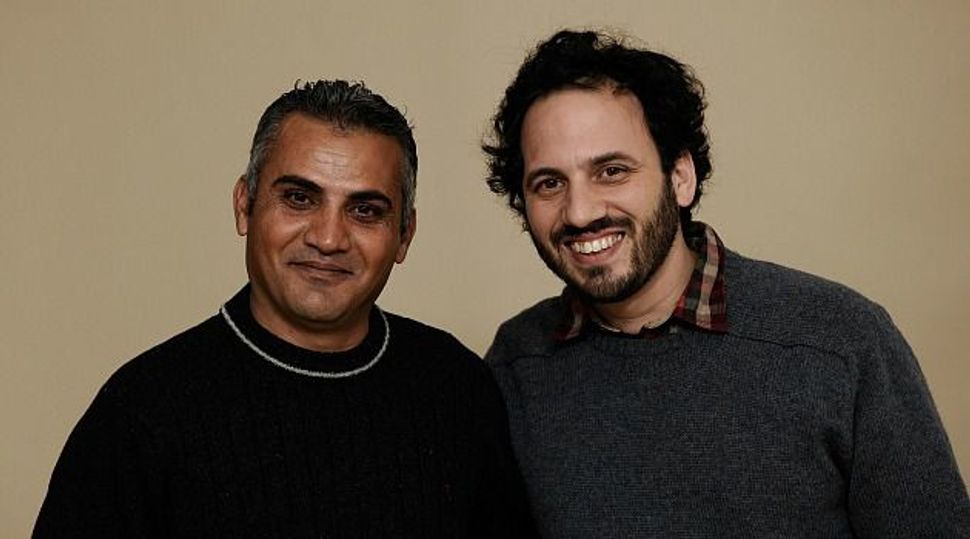 What Message? If Guy Davidi and Emad Burnat win the Oscar for best documentary, it will be a wake-up call to Israel from the world. Image by getty images

“The Gatekeepers” and “5 Broken Cameras” have already succeeded in breaking one of Israel’s biggest taboos: airing out its dirty laundry on the big screen, for the whole world to see. Now the two films are both heading to the biggest stage of all: the Academy Awards.

If either one of the films from Israel/Palestine wins in the Best Documentary category, it will be a symbolic achievement for all those who believe Israeli government policies and the occupation are untenable and want to see it held accountable for the violent cycle Israelis and Palestinians continue to be in.

But there are salient and important differences between the films. Most obviously, “The Gatekeepers” provides the perspective of the privileged and powerful occupier, while “5 Broken Cameras” speaks for the powerless and debilitated occupied. While each film exposes Israel’s systematically unethical treatment of Palestinians, if one is chosen by the Academy as the winner, it will mean very different things.

“The Gatekeepers,” directed by Israeli filmmaker Dror Moreh, who previously made a movie about Ariel Sharon and his decision to withdraw from Gaza in 2005, brings together six former Shin Bet agents to expose the moral and tactical failures in the country’s secret internal security infrastructure. “5 Broken Cameras” is a documentary jointly directed by Palestinian Emad Burnat and Israeli Guy Davidi, chronicling the West Bank village Bil’in’s response to Israel’s construction of the separation wall and routine Israeli Defense Force harassment and raids.

To make the $1.5 million-film, Moreh had to gain access to some of Israel’s most elite and authoritative figures on national security. It was filmed in a polished studio, providing the six interviewees with impeccable make-up and lighting and includes highly sophisticated digitally recreated archive footage.

To make the $250,000 “5 Broken Cameras,” Burnat pretty much just had to get hold of a camera and turn it on. It shows rough and at times jumbled footage shot by Burnat with his five different cameras, all of which are an objective testament to the damage inflicted by IDF methods over the course of years of weekly protests in Bil’in.

While both films reflect a different piece of the harsh reality of the Israeli-Palestinian conflict, they exist in entirely separate political discourses. “The Gatekeepers” takes place within Israel’s national ethos, from a conscious place of privilege and power. Palestinians are not really present in “The Gatekeepers,” except as the legitimate enemy as well as the victimized “other.”

The six spymasters who divulge for the first time their involvement in operations like targeted assassinations and mass arrests, do so out of a patriotic concern for what Israel has achieved and where it is headed (and probably political motives, as three out of the six are Israeli politicians from centrist parties). They all insist that negotiations with Palestinians are necessary to secure Israel as a Jewish and democratic state long term.

In the context of the right-wing shift in Israeli society and its increasingly draconian government, led by Prime Minister Benjamin Netanyahu (who reportedly refuses to see the film), this may seem like a radical message. However, the argument that occupation corrupts the occupier and that Israeli military control of Palestinians is untenable stems from a veteran left-wing Zionist discourse in Israel.

In this sense, recognition of the film looks like the Academy’s way of commending Israelis who question and challenge immoral actions they have taken in the name of national security. This is not as much a condemnation of the occupation as it is a lamentation of its stain on Israeli democracy. It in effect applauds Israeli guilt over being the occupying force.

“5 Broken Cameras” is simply a portrayal of life under occupation – a portrait of a disenfranchised agricultural community in the West Bank confronted with construction of a wall on their farmlands, uprooted olive trees, and tear gas and live ammunition at their protests, which have caused the death of several residents and hundreds of injuries.

The fact that Palestinian co-director Emad Burnat was detained in Los Angeles Airport en route to the Oscars on Wednesday is a painfully ironic example of the starkly different realities Israelis and Palestinians live in, at home and abroad.

“5 Broken Cameras,” on the other hand, is a personal Palestinian story, showing the implications of occupation and its human rights violations on the very people suffering it. It gives voice to a narrative often neglected, dismissed or combated — or simply ignored — in Israeli society and media.

So what message would the Academy send by picking one or other of the films? (Several polls and articles indicate that few expect either one to take home the Oscar).

If “The Gatekeepers” wins, it will be like the Academy giving the film — and by extension, Israeli society — a pat on the back for demonstrating that some of Israel’s most elite security men know how to be retrospectively self-critical. While that may be a nod toward a more honest way of viewing Israel, it’s ultimately a cop-out since it still manages to portray Israel in a redeeming light, and thus stops short of a sea change.

If “5 Broken Cameras” wins, it will amount to symbolic recognition by mainstream America of the Palestinian narrative as the occupied – and defy arguments voiced in Israel that it is nothing more than a provocative Palestinian propaganda film. It will go beyond the message expressed in “The Gatekeepers” that what Israel is doing is wrong and show the world what wrong looks like – and just how ugly it is.