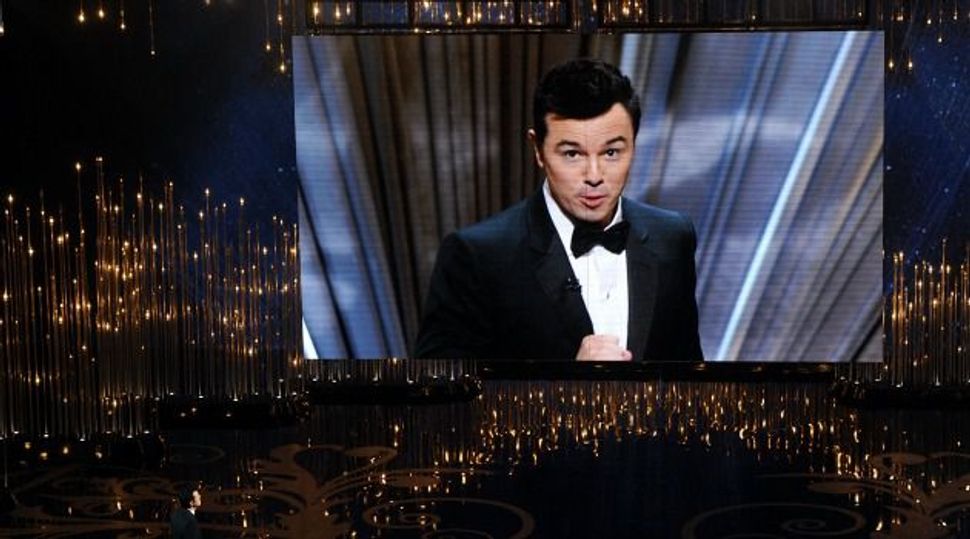 Not Funny: Seth MacFarlane?s Jewish joke at the Oscars was a sign of a bigger phenomena. Image by getty images

So far this year, the Anti-Defamation League has felt compelled to issue press releases in response to a belligerent talking teddy bear, a mildly funny Saturday Night Live sketch, and a fictional character portrayed by Kevin Spacey.

You might think the trigger-happy ADL was responding in these cases to anti-Semitic slights (its bread and butter, if you will). But that’s not what’s going on. It’s the depiction of the ADL itself, along with other American Jewish organizations, that is causing the offense.

It’s been nearly seven years since political scientists Stephen Walt and John Mearsheimer published their controversial paper, “The Israel Lobby,” which alleged, in short, that the United States’ strong support for Israel could not be explained “on either strategic or moral grounds,” and that therefore something else must be at work. That nefarious something else was the “Israel Lobby,” a broad network of “individuals and groups that seeks to influence American foreign policy” in ways that don’t really serve American interests.

There’s no need to rehash all the recriminations and arguments and counterarguments that flew around in the months and years that followed. In my mind, the editorial judgment of this paper seems to have been correct, that Walt and Mearsheimer had captured an important truth about the outsized power of the small-L lobby, but their argument was hopelessly marred by terrible scholarship and, most damningly, overgeneralization and exaggeration to the point of caricature. They turned the efforts of an aggressive and organized group of advocates into a cabal. American Jewish leaders expressed outrage about Walt and Mearsheimer (and some even alleged that they were engaging in anti-Semitism) but as long as the conversation stayed in the exalted realm of academia and on the pages of journals with circulations in the low five figures, there didn’t seem to be much to worry about.

But something has changed. Two years ago, Glenn Greenwald at Salon described the “mainstreaming of Walt and Mearsheimer.” His evidence was that New York Times columnist Thomas Friedman had explained the U.S.’s blocking of the Palestinians’ statehood bid at the United Nations as “the powerful pro-Israel lobby” having forced “the administration to defend Israel at the U.N., even when it knows Israel is pursuing policies not in its own interest or America’s.”

Two years have passed, and that mainstreaming has continued apace and now, I’m afraid, we are seeing the pop-culturizing of Walt and Mearsheimer.

My examples are all from February, but just in that one month, we had, at the Oscars, that talking teddy bear named Ted (a creation of Seth MacFarlane, the host), who chatted on stage with the actor Mark Wahlberg, about the necessity of pretending to be Jewish if he wanted to survive in Tinseltown. Ted showed him how it was done: “I was born Theodore Shapiro and would like to donate money to Israel and work in Hollywood forever. I am Jewish.” “You’re an idiot,” Wahlberg answered. “We’ll see who the idiot is when they give me my private plane at the next secret synagogue meeting,” the stuffed bear shot back.

Just some good old Protocols of the Elders of Zion humor, you say? Well, now consider a sketch from SNL (which never aired but appeared online) that mocked the Senate confirmation hearings of Chuck Hagel. As everyone knows, the nomination of Hagel as defense secretary was held up by Republican senators, backed by a vociferous and aggressive right-wing attack squad, which accused him, among other things, of insufficient respect for Israel. The sketch mocked the fealty of the senators to the Jewish State, with each trying to outdo the other with increasing absurdity. It ends with Senator John McCain asking Hagel a hypothetical question: “You get an urgent call from the prime minister, Benjamin Netanyahu, who is truly one of the greatest men of this or any age. And he says to you, ‘It is vital to Israel’s security that you go on national television that night and perform oral sex on a donkey.’ Would you do that for Israel?” When Hagel eventually says no, McCain declares that he can’t vote to confirm him.

I’m not making this up — it’s on You Tube. And Abe Foxman of the ADL was upset enough to write an open letter to Lorne Michaels, the legendary SNL producer, telling him that the sketch would fit right in with “anti-Semitic conspiracy theorists and anti-Semites.”

It was a busy month for Foxman because just a few days earlier he had to fire off another press release in response to the Netflix series “House of Cards.” In one episode, the House minority whip, played by Spacey, manages to torpedo the White House’s nominee for secretary of state by siccing the ADL on him for remarks he’d made about Israel. (Sound familiar?) Once a thinly veiled Foxman character starts calling the nominee an anti-Semite, the White House withdraws his nomination. The real Foxman was peeved at the depiction, which, he wrote, “dis­torts who we are.”

What should strike us all about these casual pop culture references is that in order to resonate with the vast millions watching they have to be based on a shared assumption: that is, the disproportionate power of American Jews over the country’s political life. The joke, the cultural wink, wouldn’t hit its mark without this shared assumption. Does this mean that American culture is simply picking up on something true, that American Jews really do possess now this supreme influence? I don’t think so. Witness the results of the actual Hagel nomination fight to see the limits of this supposedly expansive power.

So where is this notion coming from and why is it now so well accepted that it’s a laugh line? It’s hard to say definitively, but if I had to guess at one factor it would be the shift among American Jewish groups over the past few years into an only-Israel-matters agenda, projecting the idea that the Jewish community has no other priorities or interests (say, civil rights or immigration reform or health care). Add to that the unabashed quality of “pro-Israel” groups on the right, like the Emergency Committee for Israel, who have used this perception like a cudgel. In past years, they have broken all the unspoken rules, like taking out full-page ads in The New York Times accusing the president of being a traitor to Israel and running television commercials demanding an American military strike on Iran. Is it naive to wonder whether their blanketing the media with these messages might have given Americans the impression that Walt and Mearsheimer were maybe on to something?

Gal Beckerman is the Forward’s opinion editor and writes a monthly column about the media. Contact him at beckerman@forward.com or on Twitter @galbeckerman