Time’s Up for Hezbollah 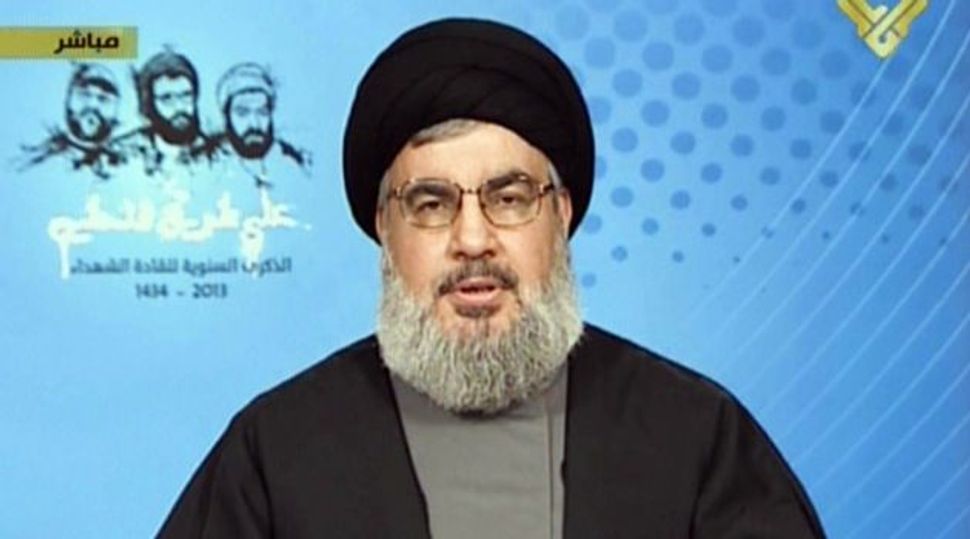 Dangerous Leader: Hassan Nasrallah, the head of Hezbollah, speaking from an undisclosed location this month on Al-Manar TV. Image by Getty Images

For many years now, the terrorist organization Hezbollah has been tolerated, if not accepted, in most of Europe. Many European countries looked the other way as Hezbollah raised huge sums of money on the continent and, perhaps in return, Hezbollah largely refrained from doing any of its nasty violent business on European soil. Two recent events should persuade the Europeans that the status quo is no longer acceptable. They ought to call out Hezbollah for what it is, place it on the European Union’s terrorist list, stop the flow of money and isolate its leadership.

The first piece of damning evidence was released in early February by the Bulgarian interior ministry. An official investigation found “obvious links” between Hezbollah and perpetrators of the July 18 attack against a bus taking Israeli tourists to the Black Sea resort town Burgas. Five Israelis and a local Bulgarian driver were killed in the attack. The six-month investigation established that two of the suspects who carried out the attack were Hezbollah members.

As the Forward reported, John Kerry, the newly designated secretary of state, immediately responded by saying, “We need to send an unequivocal message to this terrorist group that it can no longer engage in despicable actions with impunity.” It is a message, he added pointedly, aimed “particularly at our partners in Europe.”

Hezbollah’s supporters sought to downplay or denigrate the report, but their protestations have been overtaken by the dramatic testimony emerging from the trial in Cyprus of Hossam Taleb Yaacoub, a Lebanese-born Swedish citizen, who was arrested days before the Bulgarian bomb and is charged with plotting against Israeli tourists. Yaacoub has admitted to being a courier in Europe for Hezbollah and staking out locations that Israelis were known to frequent, but he claims not to be aware of the terrorist intentions of these assignments.

Besides the testimony, The Washington Post on February 26 reported that it obtained legal documents describing Hezbollah’s broader plans: “Evidence uncovered by investigators portrays a professional, well-funded effort by Hezbollah to recruit, train and position European-based operatives for what U.S. analysts describe as preparations for future terrorist operations.”

What more proof do the Europeans need? Until now, only the United States, Israel and the Netherlands designate Hezbollah as a terrorist organization; a few others nations, notably the United Kingdom and Canada, try to make a distinction between Hezbollah’s military wing and its political operations. It is a distinction without a difference, as Hezbollah leaders have themselves acknowledged. “Hezbollah has a single leadership,” Naim Qassem, the second in command, told the Los Angeles Times in 2009. A 2011 assessment by the Congressional Research Service echoes that description.

The Europeans should take Qassem at his word and put his organization on the terrorism list. It’s the right club for Hezbollah to join.

Time’s Up for Hezbollah