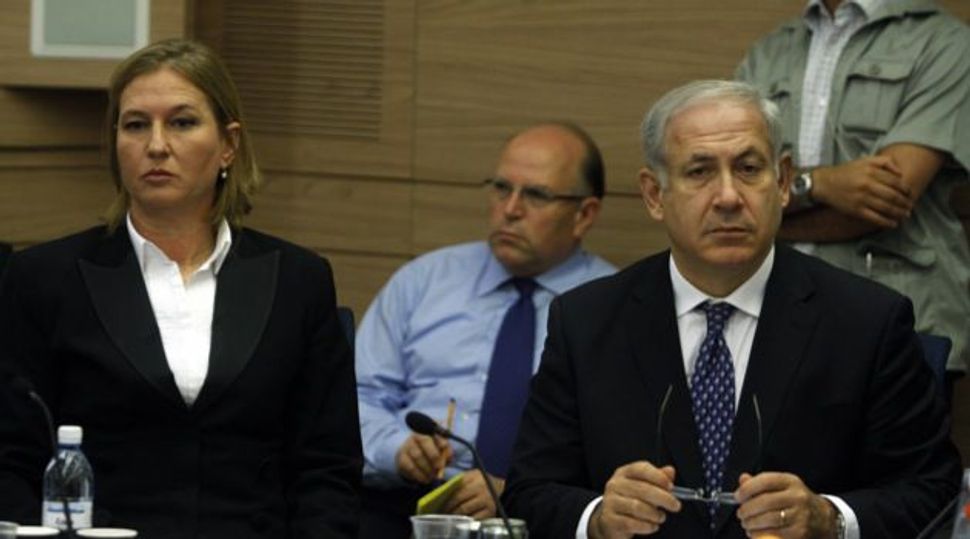 Unworkable: Livni and Netanyahu have fundamentally different ideas about the peace process. Image by Getty Images

It is not at all uncommon for appetite to displace sound judgment. Think about over-eating: Your diet will keep until tomorrow. Or think about the questions you might have asked if you hadn’t been quite so hungry — and flattered — by the job you were just offered.

Now “lead negotiator” does not quite mean what the words themselves imply. We know this because Netanyahu himself, on naming Livni, said “We need a Palestinian partner; I hope we find a Palestinian partner for negotiations,” and pledged to “form a team of ministers supervised by me for a peace agreement, with Livni at its helm.”

So from the start we know that Netanyahu [“supervised by me”] is not giving Livni free reign. Fair enough. But it gets worse: Livni, who is very smart, is totally devoted to a two-state solution; her new prospective boss, however, is not.

How do we know this? Consider the Prime Minister’s words at a February 18 meeting of the Jewish Agency Board of Governors. His theme? n fact, it is 1938 all over again: It “is the millennial desire of the enemies of the Jews, fired by Jew hatred in antiquity and medieval times and in modern times, to eradicate the Jewish people. [Note, not the Jewish state but the Jewish people]. That has not changed. It may have taken a back seat for a few decades after the Holocaust, it was politically improper, but it has come back with full force.”

“It’s not easy to get into these negotiations, because…it’s only Israel that has to make concessions. Everybody knows that. Everybody speaks about that. [But] “the Palestinians…will have to make concessions too. That’s part of the world, and that’s part of a genuine, workable and durable peace, even though it’s not raised like that. But I raise it like that. I call it like it is, and it’s a difficult task.

“Now, I’m not placing these conditions before the entrance gate. I don’t think we should spend or waste another four years negotiating about the negotiations. I think we should just get on with it. And I view President Obama’s visit here, along with Secretary Kerry, as an opportunity to reset this and get back to the business of genuine negotiations — direct, unimpeded negotiations without preconditions between Israel and the Palestinians. That’s the way to proceed towards peace.”

Now, how the Gordian knot of “very stringent conditions” along with “no preconditions” can be untied remains, to put the matter very mildly, a puzzle. It is a puzzle that has profoundly affected the Palestinians, who — understandably — are especially concerned with the “stringent conditions” Netanyahu has in mind. And they are loath to set aside their own preconditions so long as stringency awaits them.

Livni knows all this. She knows that Netanyahu has no regard for a serious two-state solution, and that she, therefore, will be hampered, even crippled, when “at the helm” of negotiations. But she evidently does not believe, as I am inclined to, that Netanyahu will fail to form a governing coalition and will therefore have to call new elections and that this time, Yair Lapid and his Yesh Atid party will win more votes than Netanyahu’s Likud.

And that is how appetite conquers judgment and confounds principle and a last hoorah becomes a sorry squeak.