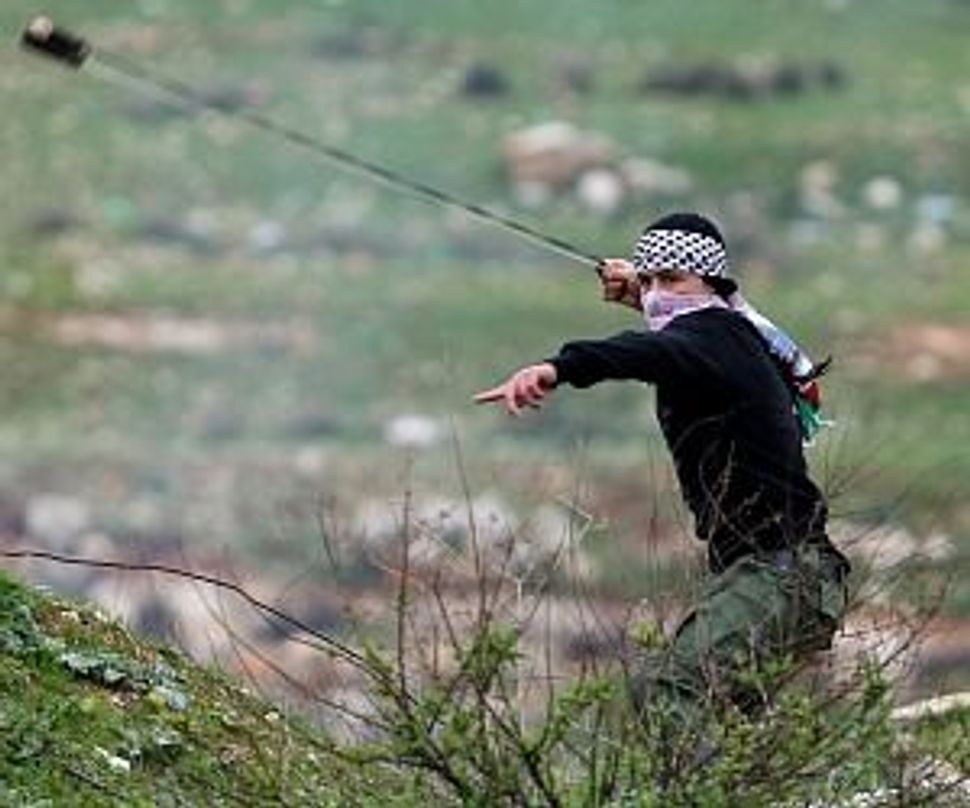 My husband has long argued that if the Palestinians really wanted a state side-by-side with Israel, all they would have to do is adopt a nationwide, non-violent strategy. Peaceful demonstrations up and down the West Bank, continuously, steadfastly, would prick the world’s consciousness and give Israeli and Palestinian leaders no choice but to negotiate and do what they needed to do to end the occupation and secure Israel’s democratic future.

My husband may be engaging in wishful thinking, but it’s a powerful and attractive idea. The same thought may have occurred to whoever commissioned, edited and published Ben Ehrenreich’s cover story in the Sunday New York Times, lauding the Palestinian village of Nabi Saleh and what the Times called its “path of unarmed resistance.”

Just a couple of problems. Ehrenreich is hardly a disinterested observer of the Israeli-Palestinian conflict. And Nabi Saleh’s protests are hardly non-violent.

We have Chemi Shalev, based in New York for Haaretz, to credit for pointing out Ehrenreich’s recent troubling opinions about Israel. As Shalev wrote in his Sunday column:

“In 2009, Ehrenreich published a direct attack on Zionism in the Los Angeles Times entitled ‘Zionism is the Problem’. In the article, Ehrenreich castigates not only the ‘deplorable conditions in which Palestinians live and die in Gaza and the West Bank’ but ‘the Zionist tenets on which the state was founded’ as well.”

Ehrenreich continues: “Founding a modern state on a single ethnic or religious identity in a territory that is ethnically and religiously diverse leads inexorably either to politics of exclusion… or to wholesale ethnic cleansing. Put simply, the problem is Zionism.” He concludes by calling for a secular, pluralistic, democratic government in Israel and Palestine, and the abandonment of the Zionist dream.

Now, I’m not one to outright condemn every writer for what he or she has written before. But Ehrenreich’s politics are so evident and his sympathies so decided that it is difficult not to see his bias running through the long magazine story.

My second criticism illustrates that point. It is not until well into the story that Ehrenreich acknowledges that the “unarmed” resisters routinely throw stones at the Israel security forces. “We see stones as our message,” Bassem Tamimi, the story’s protagonist, is quoted as saying. We’re told that Tamimi got annoyed when asked if stone-throwing counted as violence, arguing that Israel uses greater and more lethal force on a regular basis.

That may be true. But that logic doesn’t excuse the original fault here. Throwing stones — not little pebbles, but at times stones that can damage or even kill — is a violent act. Gandhi didn’t do it. The courageous African Americans who stood at the bridge in Selma didn’t do it. It takes great determination, character and patience to engage in such protest, and I can understand how, after decades of occupation, it may be difficult for the villagers of Nabi Saleh to restrain themselves. But that’s unarmed resistance. Anything else is a misnomer.

The fact that Ehrenreich only glancingly raised this point and just as quickly dismissed it can only be explained by the bias with which he approached the story. Too bad his editors didn’t ask more probing questions.

And it’s too bad that the picture he paints will now be discredited, because we need to be reminded of the costs of occupation and the continued drain on Israeli and Palestinian moral behavior. As the new Israeli government turns inward to confront looming domestic problems, I fear that discussion of how to resolve the conflict with the Palestinians will be cast aside, growing ever more illusive as settlement activity continues unabated.

I only wish the villagers of Nabi Saleh could alter their strategy and one day prove my husband right.