Honoring the Many Liberations That Mark Passover 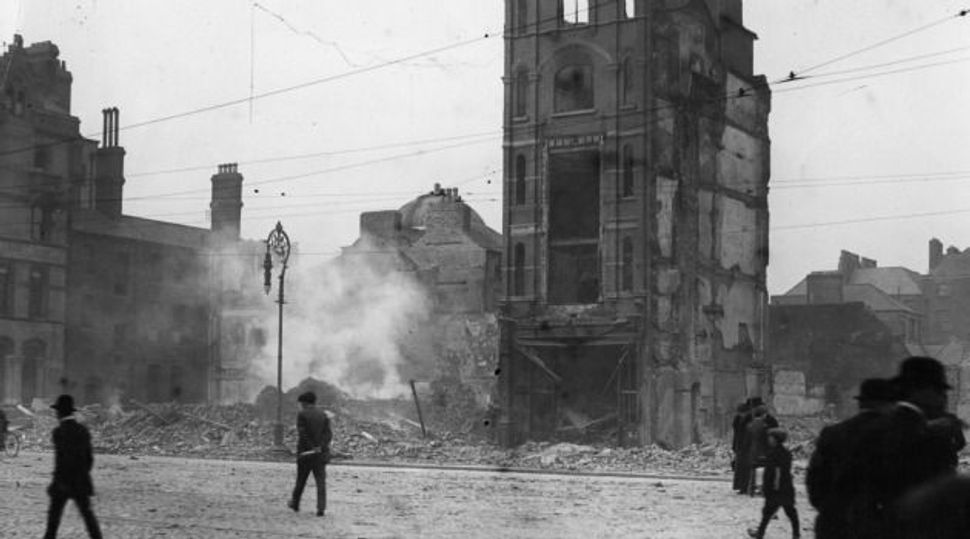 Freedom Rising: During the season of freedom, we should raise a glass to all who fought against colonialism and oppression, from Ireland to Warsaw to Jerusalem. Image by getty images

This is the season of our deliverance. I don’t think I’m going out on a limb saying so.

It was in this season, tradition teaches, at the first full moon of spring around 3,500 years ago that our Hebrew ancestors staged recorded history’s first successful slave rebellion. We’ve marked the anniversary ever since by retelling and re-enacting our liberation. It’s not enough, we’re taught, merely to discuss it — we’re required to experience it each time anew. “In each generation,” the Mishnah decrees, “every person is obliged to see himself as if he himself had come out of Egypt.”

It doesn’t necessarily take a great stretch of the imagination to see oneself in that moment of liberation, if only because the moment keeps recurring. It was on the third day of Passover in 1775 that the war for American freedom began at Lexington and Concord. Three short weeks and 173 years later, with the taste of matzo still fresh in our mouths, the reborn state of Israel declared independence in 1948. The season of our deliverance, indeed.

And, lest we forget, it was on the first day of Passover in 1943, 70 years ago, that the youth of the Warsaw Ghetto began their hopeless, glorious uprising against the most wicked of modern pharaohs. They were beloved and pleasant in their lives, and in death they were not divided, and they redeemed the honor of Israel.

Emotions are probably more divided over the death of another young rebel on the first day of another Passover, 1,910 years before Warsaw. The followers of that slain rebel, Jesus of Nazareth, learned from him that redemption is of the spirit, even when the body is still in bondage. Most of his fellow Jews disagreed. Mutual recriminations followed. So began perhaps the longest and deadliest blood feud in history.

For centuries afterward the season of freedom was a time of fear and suspicion. Each year at this time, Jesus’ followers recalled his death and, all too often, rekindled their anger. And Jews remembered their ancient liberation and prayed for a second deliverance.

When did the season of our fear become once again the season of our rising? Perhaps it began on Easter Sunday in 1903, 110 years ago. In Kishinev, in today’s Moldova, a Christian mob attacked the Jewish quarter that day, as so many Easter mobs had done before, and 49 innocents were murdered. It was the seventh day of Passover.

This time, though, Jews fought back. Across Russia young Jews followed suit. They organized self-defense units, the first ever. Thousands joined the revolutionary underground, beginning the unraveling of czarist tyranny. Thousands more abandoned Russia for Palestine in the wave called the Second Aliyah, to lay the foundations of Jewish statehood.

In America, Kishinev ended Jewish ambivalence toward power. A group of bankers and lawyers met to form the first modern Jewish lobby, the American Jewish Committee, with fighting Russian oppression at the top of its agenda. One of them, banker Jacob Schiff, personally underwrote Japan’s war bonds to secure Russia’s defeat in the Russo-Japanese War. In Kishinev on Easter 1903, the seventh day of Passover, Jews began to fight.

In the century since then, the intersection of Passover and Easter has acquired another possible meaning. We’ve entered a new era. We’re still struggling to absorb it, yet we ignore it at our peril.

This new era probably began on Easter Monday, the seventh day of Passover in 1916. On that day a few hundred Irish nationalists in Dublin mounted an armed uprising against three centuries of British rule. The Easter Rising lasted only six days and ended with the execution of all 15 of its leaders, yet it ignited a chain of events that led to full-scale war and Britain’s concession of Irish independence in 1922. Ireland was the first captive nation since 1776 to throw off British rule. Its victory lit the way for the others that followed, from India to Kenya to Israel.

Of all the old-young nations battling for independence in the 20th century, few crossed paths as frequently, as intimately or as ambivalently as the Jews and the Irish. Both were ancient peoples, long kept in shadows on the margins of European civilization with only faith and pride to preserve them. Both fought to revive their ancient languages. Both agonized over the partitioning of their homelands.

Interests were never identical, of course. During World War II, some Jews recall bitterly, the radical wing of the IRA briefly sought an alliance with Nazi Germany, the enemy of its enemy, unfazed by the Nazis’ murderous racism. Few remember that the Nazis found them useless and abandoned them. Fewer still remember that Shamir tried to ally his Stern Gang with the Nazis during the same years for the same reason, but the Nazis wouldn’t have him. Once again, Jews and Irish shared a common fate, angry with the Allies but unwelcome on the other side.

It’s a mistake to romanticize the relationship more than it deserves. Ireland’s old-school Catholicism sometimes held Jews in disdain after other nations had outgrown such bias. After 1949, when Ireland won full independence, it joined an informal bloc of deeply Catholic nations, including Spain, Portugal and the Vatican, that snubbed Israel and withheld recognition for years. Today Irish Middle East diplomacy treats Israel more harshly than almost any other European state.

If romanticism is misplaced, though, there’s a greater danger in cynicism. It’s fashionable these days to see enemies everywhere, to nurse every slight and conclude that Jews are a people apart. That may have been true once, but no longer. Today Jews have re-entered the rough and tumble of history, just as Zionism intended. In this imperfect world alliances have limits and heroes have lead feet, friends let you down and enemies meet you halfway. This is what freedom looks like.

And so, in this season of deliverance, let’s raise a glass (or four) to the brave martyrs of Warsaw and Dublin who lit the way, and say dayenu.

Honoring the Many Liberations That Mark Passover