Can Barack Obama Turn Israel Into a Blue State — With Benjamin Netanyahu’s Help? 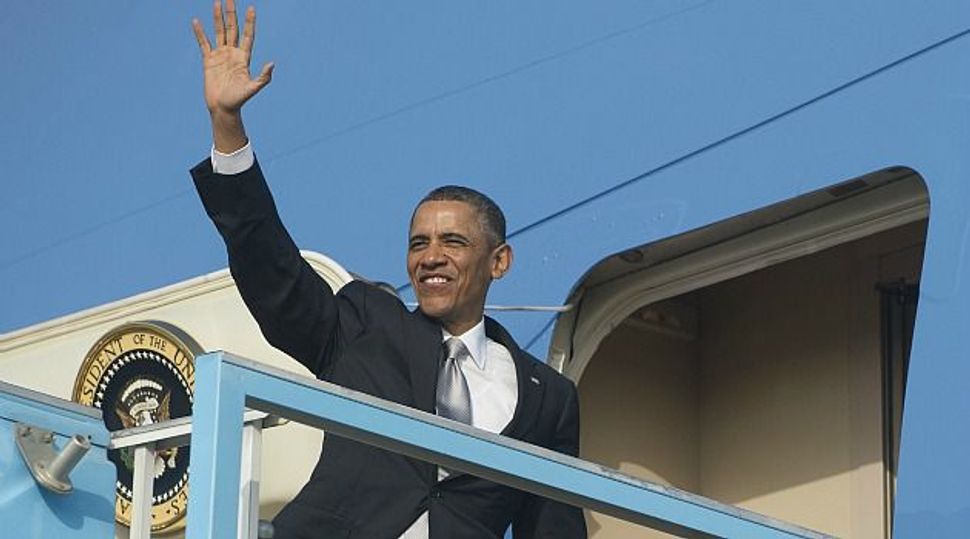 But even before that, there was another moment of symbolism when the two presidents, Obama and Shimon Peres, walked side by side into the presidential residence in Jerusalem for the state dinner, while the prime minister, Benjamin Netanyahu, walked behind with his wife, Sara. State protocol or not, the prime minister, forced to yield center stage to the political elder statesman, did not seem happy.

Peres’s opening words to the gathering that included every major political and religious figure on the Israeli scene was, “Bravo, Mr. President.” Here was someone to whom Peres could talk over dinner, a younger American version of himself.

Earlier in the day, Obama did what had been promised but seemed unlikely. He spoke directly to the people of Israel, and about peace. Here was the language of “hope,” directed not to the populace of urban Chicago or rural New Hampshire, but to Israelis. Young Israelis, “Blue State” Israelis.

Obama’s afternoon speech, which surprised and quickly grabbed the attention of the nation, was addressed to university students from around the country. And once he began speaking, the controversy from earlier in the week — the exclusion from the audience of students from the university in the settlement Ariel — made sense.

Obama spoke in Hebrew, cited the Bible and the Passover Haggadah, quoted from Theodor Herzl and even Ariel Sharon (some of his other references escaped Israelis: TV commentators had to explain to the audience watching the state dinner who Abraham Joshua Heschel was). But he most emphatically did not speak for the cause of “Greater Israel.” It was not for Red State Israel, those living in the occupied territories, but for the Blue State, the students gathered in Jerusalem. Biblical history, it turns out, resonates even for them.

Obama almost certainly knows that the prophet Joshua, who inherited the leadership of Israel from Moses, is associated with Israeli settlement — Joshua is the one who conquered the Land of Israel. But in his speech, Obama referred to Blue State Israel as the “Joshua Generation,” asking them to make their own future: “You must create the change you want to see.”

To the Joshua Generation, Obama exhorted — making the previous days of publicly chumming up with Bibi almost seem a ruse — “political leaders will not take risks if the people do not demand that they do.”

The Obama of this speech is the figure for whom it seems that Peres, soon to celebrate his 90th birthday, has been waiting for in Israel forever. With returned admiration, Obama toasted his presidential counterpart jovially. Though he spent the day talking to the youth of Israel, touting Israel’s hopeful future, he also looked back at Peres, Ben Gurion, Meir, Begin and Rabin.

“The giants have left us,” Obama said. “Only you are with us still — a founding father in our midst.”

But is there anyone between the now venerable Israeli founding father and the Joshua Generation to take up, practically and politically, Obama’s agenda? Is there hope for Israel’s Blue State Generation?

Yair Lapid, the flamboyant leader of the centrist Yesh Atid party, the current Finance Minister, with whom Obama chatted at length on the red carpet upon his arrival, might seem the obvious candidate. But Lapid’s agenda, though Blue State, has always been domestically focused, on education, religion-state issues and the “sharing of the burden” that would, among other things, subject the ultra-Orthodox to the draft.

So this may leave, as unlikely as it may seem, Netanyahu. For Obama’s speech surely will change the political landscape in Israel for the foreseeable future, moving the conversation away from social issues to Netanyahu’s comfort zone, security and foreign policy.

The prime minister must have felt miffed by the cordiality between presidents, and cynical, not without justification, at what he undoubtedly sees as Obama’s naïve belief that “hope” can be transferred from Concord to Hadera, from middle America to middle Israel.

But when the prime minister gets over being slighted, perhaps his political instincts, his sense of the opportunity to once again take command of the national conversation, will move him to draw from the momentum of Obama’s speech. Peace, as the president of the United States said, “is a possibility.” Maybe Netanyahu, with the American president’s political clout behind him, will take the chance — and center stage — to convince Red State Israel that Obama’s Blue State vision is finally worth a try.

William Kolbrener, chair of the English department at Bar Ilan University in Israel, is author most recently of “Open Minded Torah: Of Irony, Fundamentalism and Love” (Continuum, 2011).

Can Barack Obama Turn Israel Into a Blue State — With Benjamin Netanyahu’s Help?