Where’s the Justice for American Settler Killed by Palestinian Stone-Throwers? 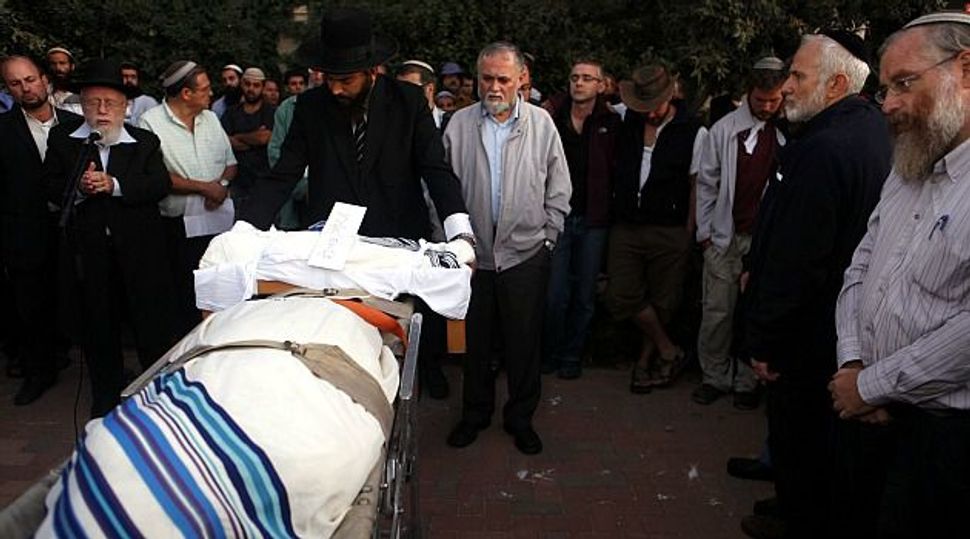 Solemn Moment: Jewish settlers gather for funeral of Asher Palmer and his son, Yonathan, whose car was hit by stone-throwing Palestinians on the occupied West Bank in 2011. Image by getty images

Two FBI special agents sat across from me in a conference room at the J. Edgar Hoover Building, in Washington. It was late October last year, shortly after Sukkot. We were discussing the deaths of my son Asher Palmer, and my grandson Yonatan Palmer, who were murdered on a Friday afternoon, September 23, 2011.

That day, Asher had strapped Yonatan into his car seat and headed to his in-laws in Jerusalem, where he expected to spend the Sabbath with his wife. Soon after they left, Asher drove onto a two-lane highway just outside the West Bank settlement of Kiryat Arba; a taxicab sped toward him, its rear window rolled down. The cab swerved close to Asher’s lane, and a football-size rock was thrown from the back seat, crashing through his windshield. Asher’s car veered off the road and rolled over. The cab sped off.

We can’t know Asher’s reactions at that moment. The police found no skid marks on the road, and theorized that the stone had knocked Asher unconscious, leaving him unable to brake or to control his car. Asher was just shy of his 25th birthday. Yonatan was nearly 1 year old. Both were declared dead by the first responders.

Wa’al al-Arjeh drove the cab. Ali Saadeh threw the rock. Al-Arjeh later said that he had worked for the security and intelligence forces of the Palestinian Authority for nearly 10 years. Saadeh was responsible for a number of other attacks against Jews.

On October 4, 2011, Israeli security forces arrested Saadeh, al-Arjeh and three of their accomplices, who confessed to the attack. A fourth member of al-Arjeh’s gang was arrested several days later. A series of trials followed, with al-Arjeh convicted of murder in early April, and Saadeh now awaiting his own verdict.

Asher was an American citizen. The United States Department of Justice therefore was supposed to have responded immediately to the murders with its own set of prescribed actions: assigning an FBI rapid deployment team to the region, opening an FBI investigation and establishing a joint task force with the Department of State.

Not one action, I learned, had been taken for Asher. Not even a preliminary inquiry. So 13 months had passed since the murders (now 18 months), and I was sitting in an FBI office, trying to understand why. The FBI agents explained: They preferred to open “value added” investigations.

Mine, however, was not an isolated complaint. To date, the United States has not prosecuted a single Palestinian for attacking an American in Israel or in a P.A.-controlled location, but in the past two decades alone, as many as 143 Americans have been killed or badly injured. Were all of these cases also deemed unworthy?

The DOJ’s hands-off policy was acutely in evidence in the fall of 2011, when Israel made a deal with Hamas and freed 1,027 convicted criminals in exchange for hostage Gilad Shalit. Fifteen of the released terrorists had murdered or maimed Americans, but the DOJ essentially did nothing more than gather information. No hot pursuits, no indictments, no extraditions.

A group of 54 of America’s congressmen, no longer willing to abide DOJ negligence, wrote a bipartisan letter in March 2012 to Attorney General Eric Holder, urging him to adhere to the mandates of the law of the United States.

A DOJ public email, disseminated shortly afterward, raised hopes of a more concerted effort to follow, and the DOJ did seem to step up its support services for victims’ families; however, it still is failing to vigorously pursue a complete course of justice, and hardly “taking the matter of prosecuting terrorists very seriously,” as the email claimed.

Congress must increase its pressure on the DOJ so that it finally acts effectively. Moreover, American lawmakers should anticipate another negotiated terrorist release, and should task officials with formulating a plan to intervene long before that occurs.

At a minimum, the United States must demand that Palestinians who have harmed Americans be excluded from release in Israeli-P.A./Hamas deal-making and that they do not receive sanctuary in P.A. territory.

Justice and deterrence are pillars that ensure a society’s integrity and safety. Permitting terrorists with American blood on their hands to walk away scot-free, under any circumstances, is not just an abuse of the rights of victims and their families — it is bad policy.

Which brings us back to the murderers of Asher and Yonatan. With premature prisoner release a regrettable fact of life, the DOJ has to act now to ensure that the United States will be well positioned to keep their killers behind bars.

If, in the end, Wa’al al-Arjeh, Ali Saadeh and their accomplices do not get the punishments they deserve, the United States will have failed once again to honor its pact with victims and with society. We, and Congress as our representative, must not let that happen.

Michael Palmer is the father/grandfather of Asher and Yonatan Palmer. Jeff Daube, the Israel director of the Zionist Organization of America, contributed to this opinion piece.

Where’s the Justice for American Settler Killed by Palestinian Stone-Throwers?