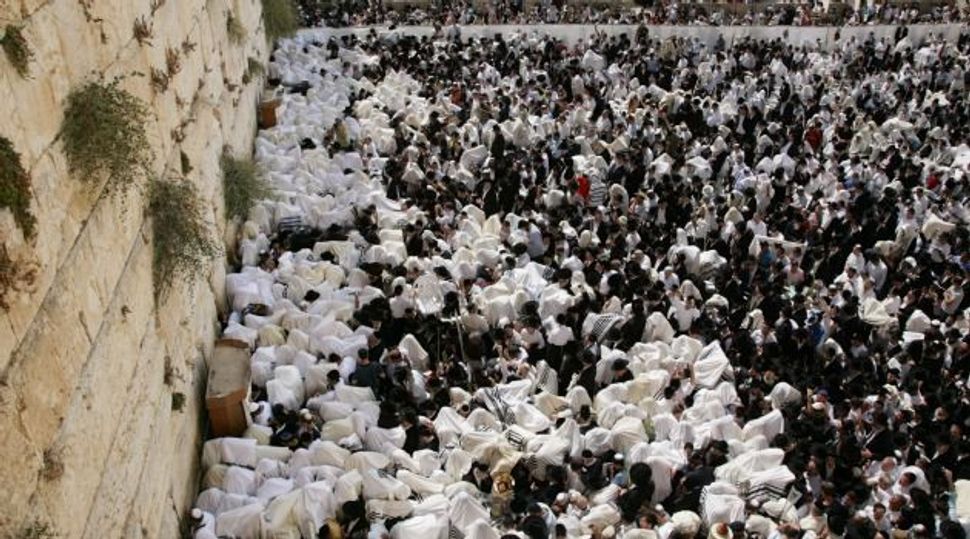 We tend to think of the Kotel, the massive white stones of the Western Wall in Jerusalem, as a scene frozen in time, ancient and immutable — men praying on one side, women on another, a strictly Orthodox synagogue on Judaism’s holiest plot of land. But the mechitzah separating men and women has been there for only a century or so. It wasn’t handed down from Sinai. When the Rev. James W. Lee visited the site, he wrote that he “found between one and two hundred Jews of both sexes and of all ages, standing or sitting, and bowing as they read, chanted and recited, moving themselves backward and forward, the tears rolling down many a face.” The visit was in 1863. The emphasis is ours.

The use, ambiance and regulation of the Kotel has changed over time, and it must continue to do so if it is to remain a sacred space for any Jew who deems it so. The latest proposal for the Kotel, championed by Natan Sharansky and now endorsed by most American Jewish religious leaders, is an ambitious attempt to reorient the ancient site to address contemporary needs.

The plan is imperfect because the values it seeks to balance are irreconcilable. But thanks to Sharansky’s leadership and the willingness of so many to compromise, the proposal may dramatically reshape Judaism’s holiest space and even — here we are allowed to dream — herald a new acceptance of religious pluralism in Israel.

For the brave, committed Women of the Wall activists, and the millions more who do not wish to daven like ultra-Orthodox Jews, the imperfections of Sharansky’s proposal are obvious. The hegemony of Haredi authorities remains intact at the space that has for centuries, as Lee noted, brought Jews to tears. Men get a section that seems to grow every year. Women must pray separately and quietly, watched over by modesty patrols whose evolving rules only seem to become stricter with every year.

It’s entirely fair to question whether the planned expansion on the southern end of the Wall into a new section for egalitarian prayer sidesteps the imperative for gender equality by creating a separate — but not equal — “Wall.” It’s also fair to worry that the project as conceived is too expensive, unwieldly and politically delicate to wend its way through Israel’s politicized religious bureaucracy. Not to mention the Muslim authorities with jurisdiction over the bridge leading to the Temple Mount that now serves as a boundary on the women’s side but would become the dividing line between what is and what will be.

The status quo, however, is unacceptable. If the rabbinic authorities who govern the Kotel won’t change, then the Kotel itself must change. That’s the brilliance of what Sharanksy has proposed. It challenges Jews and, by extension, the State of Israel to expand our notion of sacred space, to get beyond the fetishization of one set of stones to be able to include other parts of what is still the holiest site in our tradition.

And it allows the agitation for more gender equality in Israel to move beyond its focus on — some might say obsession with — prayer at the Kotel. The truth is that, for all the symbolism provided by Women of the Wall, most Israelis never connected with the cause because most secular Israelis don’t connect with the Kotel as it is now. The continuing protests to integrate prayer have largely been supported by Americans. And in the end, Israelis have to want it, too.

But if a miracle happens, and Sharansky’s plan to enlargen the plaza and create a prominent, independently run, fully accessible egalitarian section is implemented, not only can visiting American Jews feel at home. This change could encourage Israelis to understand, embrace and, hopefully, fairly fund alternatives to the virtual Orthodox monopoly on Jewish religious practice. Already his plan has sparked rare unity among denominational streams in America.

Let that be just its first miracle.