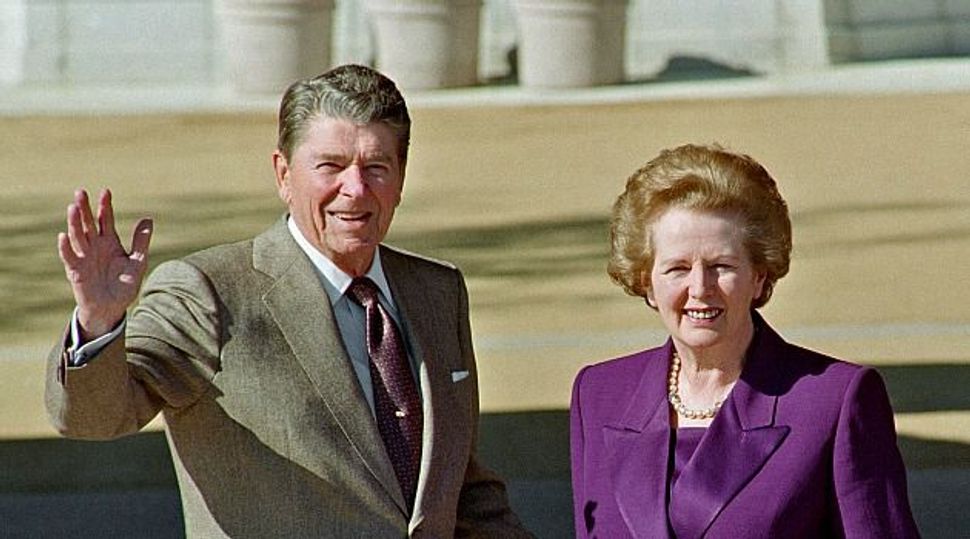 Birds of Feather: Margaret Thatcher and Ronald Reagan meet at dedication of his presidential library in 1991. Image by getty images

Say what you will about former British prime minister Margaret Thatcher, the “Iron Lady” who passed away April 8 at age 87: If she imposed unnecessary suffering on ordinary Brits through her heartless economic policies, which we call Reaganomics and the rest of the world still calls Thatcherism, she at least had an excuse. Ronald Reagan, her partner in economic savagery, had none.

When Thatcher entered office in 1979, she inherited a country caught in a downward spiral. In the space of a quarter-century, Britain had slid from its onetime status as the world’s financial, industrial and military hegemon to a state of tattered beggary with no bottom in sight. An island nation that once ruled the waves, that invented modern industry and controlled an empire spanning the globe, Britannia had spent the first half of the 20th century hollowing out her economy. She allowed her industry to stagnate, and replaced productive income with financial sleight-of-hand. The empire was still afloat, but it was riding on a sea of debt.

Like the rest of democratic Europe, Britain built an extensive welfare state during the 20th century to soften the hardships of the free market. Unlike other democracies, Britain hadn’t bothered nurturing the imaginative industries, decent jobs and tax base to pay for it. Instead she gambled on the steady flow of cash provided by her empire, and on the primacy of the pound sterling as the world’s currency, relying on American economic might to back it up. Then, in 1956, the bottom fell out.

It began with a seemingly momentary crisis in the Middle East. Egypt had toppled its monarchy and installed a new, uncertain regime of nationalist colonels. Britain, France and Israel staged a lightning raid on the Suez Canal and Sinai, meant to bring the colonels to heel. But the invasion had an unintended consequence: It sparked a run on the pound. President Eisenhower, enraged by the foolhardy adventurism, refused to step in. The pound collapsed, and Britain began her long slide.

By the time Thatcher arrived in 1979, drastic surgery was needed to save the patient, and she conducted it unflinchingly. Perhaps too unflinchingly. She enacted a harsh regime of privatization, deregulation and high-end tax cuts within a flatter, less progressive tax code. She attacked unions and allowed unproductive industries to shut down or flee, abandoning tens of thousands of workers to dramatic wage cuts or long-term unemployment.

The net effect was to unmoor the post-empire British economy from the old heights it could no longer sustain and let it settle down to its new, humbler level. Perhaps a gentler bedside manner might have made the transition easier. Still, she took action and the patient was saved. Thanks to Thatcher, Britain, once the world’s mightiest empire, was able to claw its way back up to second-tier status.

Reagan, entering office two years after Thatcher, inherited an economy suffering from a head cold, not cancer. The Arab oil embargo of 1973 had induced an economic shock, resulting in an unfamiliar brew that economists called stagflation: a mixture of stagnant growth and rising inflation, combined with rising unemployment. In America at the end of the 1970s, inflation topped 12% and unemployment soared to 8.8%. This seemed shockingly high back then.

Still, the underlying American economy was sound. Federal deficits were steadily declining after a brief spike during the oil embargo. Government debt was at its lowest level since before the Great Depression. Most industries were strong. America was still the world’s economic powerhouse.

Reagan shared Thatcher’s ideology, but not her wisdom. He responded to America’s downturn with the medicine that Thatcher had applied to Britain’s long-term structural decline: high-end tax cuts, union busting, deregulating finance, letting industry float off-shore unhindered. Unemployment soared in Reagan’s first years, then settled down as a middle-class nation gradually transformed itself into a society of financial speculators and burger-flippers. All that, plus a national debt that nearly tripled in the space of eight years and continued climbing unchecked for the next two decades, thanks to the anti-tax political culture of the movement Reagan brought to Washington.

Drastic medicine for a patient that didn’t need it. The America that Ronald Reagan took over in 1981 bore no resemblance, in its fundamental economics, to the threadbare manor house that Margaret Thatcher inherited in 1979. By the time he and his heirs were done with it, it bore a remarkable resemblance. Reagan’s adoption of Thatcherism had the perverse effect of introducing the very sort of structural malaise here that Thatcher was trying to cure over there.

Today, after three decades of Reaganomics — and, to be fair, Clintonomics and the Washington Consensus and the Chicago School and the whole prolonged crowd hysteria known as neoliberal economic wisdom — America is approaching the same sorry crossroads that Britain reached in 1979. A deindustrialized heartland, steadily declining average incomes and soaring inequality, high household and national debt, overextended military obligations paid for on the national credit card. Dangerous dependence on foreign creditors. False confidence that whatever happens, we’ll be safe because our currency is the world’s trading standard. We’re now in a very precarious spot.

We didn’t have to go down this road. We prospered for 30 years after World War II with a top marginal income tax rate of between 70% and 91% on the very wealthiest Americans. We didn’t have to cut it in half and spend the last 30 years watching inequality grow and debts pile up. We had a secure middle class when we had labor laws that protected unions’ ability to bargain for decent wages and pensions. We could have developed tax laws that discouraged companies from skipping town and bankrupting whole communities. We could still do all that.

The reality is, of course, that none of that is likely in today’s political culture. Right now, the best we can hope for is to slow the hollowing out of the economy and take baby steps toward reform. We can fight to restore procedural sanity in Washington so that other nations don’t lose confidence in Washington and abandon the dollar, as China has begun to do. And we can hope like hell that our politicians don’t launch some hare-brained attack somewhere in the Middle East that alienates our allies and provokes our creditors.